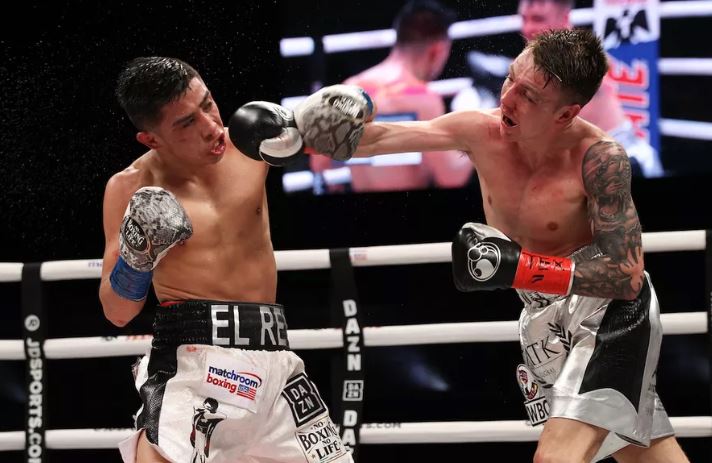 Wales’ Jay Harris felt he may have earned a draw but the judges gave the verdict the other way as he failed to successfully challenge Julio Cesar Martinez for the WBC flyweight title in Texas.

The Swansea fighter lost by unanimous decision in a gripping fight as his spirited performance was not enough to claim the title from Martinez on Saturday night.

“Obviously I am very, very disappointed, but I can take a lot from this,” said Harris.

“I was getting booed going out and it sounded like I left the ring with a stadium full of fans. I showed I am a world-level fighter.”

Harris stepped up to world level against a fearsome Mexican and enjoyed spells of success, but was floored in the 10th as Martinez retained his WBC belt with scores of 118-109, 116-111 and 115-112.

Making an aggressive start, Martinez ripped quick combinations onto Harris, who was bleeding from the nose by the end of the first.

Julio Cesar Martinez retains the WBC flyweight title after a points victory over the brave Jay Harris who fought out of his skin!

Harris replied with sharp right hands in the second, but Martinez has gained a reputation as a destructive puncher and a right hook wobbled the legs of the Swansea man.

Into the third, Harris bravely opted to meet Martinez in the centre, trading fierce shots from close quarters.

Harris suffered a cut over the left eye, a sign of Martinez’s spiteful work, but still fired back defiantly in the fourth.

With the part-time Amazon warehouse worker standing firm, Martinez switched his assault to the body in the fifth, although Harris rattled his opponent’s ribs as he provided more stubborn resistance in the sixth.

Martinez marched out for the seventh, delivering hurtful punches with either hand, only to be pushed back by the determined Harris.

The pace dropped slightly in the eighth, allowing Harris to give more glimpses of his polished skills, but Martinez troubled him with an explosive flurry of punches.

The way Jay Harris announced himself to the world scene made last night one to remember.

He showed a bit of everything; nuts, guts and a shed load of skill. You couldn’t ask for much more.

Welsh boxing is in a good place with boxers like Jay leading the line. pic.twitter.com/4hWgJ4D0cK

A crunching body shot then dropped Harris to his knees in the 10th, although he climbed to his feet and gamely threw back as Martinez closed out a convincing victory in the late rounds.

On the same bill in Frisco, Kal Yafai has lost his WBA super-flyweight crown to Roman ‘Chocolatito’ Gonzalez after being knocked out in the ninth round.

Britain’s longest-reigning world champion failed in his sixth defence of the title, falling to a crushing right from the Nicaraguan.

The 30-year-old from Birmingham had targeted a major fight having outpointed Norbelto Jimenez in June and had said he was “honoured” to be fighting his idol Gonzalez, the former four-weight world champion.