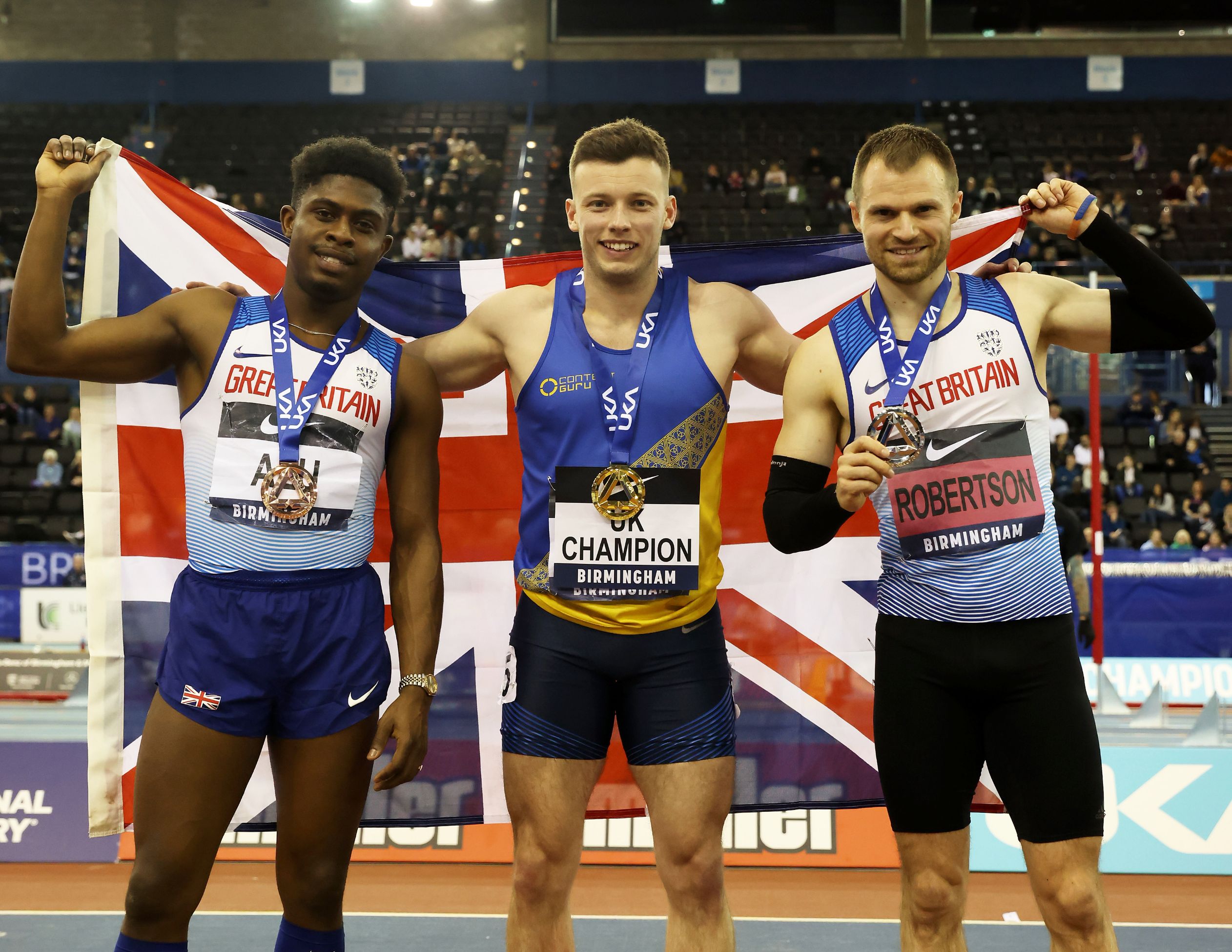 Jeremiah Azu (left) on the podium in Birmingham. All pics: Getty Images For British Athletics

There was medal success on the track and in the field for Welsh athletes on the first day of the British Athletics Championships on Saturday.

In the 60m Azu clocked a personal best of 6.56 in winning his semi-final to book his place in the final alongside fellow Cardiff athlete Sam Gordon, who also claimed a PB of 6.65 finishing second in his semi.

In the final, Azu finished third behind champion Adam Thomas, of Bracknell, and Sale’s Andrew Robinson, with Gordon just outside the medals in fourth place.

Gordon matched his new personal best of 6.65, while Azu clocked 6.61 – a time he admitted he was disappointed with afterwards.

“If you watched the race back, in step two I just went straight up,” said Azu. “In the 60m if you don’t drive properly then it’s game over.

“I’m a bit frustrated with the time as I wanted to run 6.5 and I was chasing it too much.

“I’m a bit disappointed with a bronze and I’ve only been beaten by two other guys in the UK. I want to try and do it all for the outdoors and if it’s God’s will then it will be done.”

The Cornwall AC man produced an indoor PB of 17.09m in the third round which ensured third place behind champion Scott Lincoln and silver medallist Youcef Zatat.

The Pontypridd Roadents athlete said afterwards: “It was a scrappy affair out there but I am through to the final so that was the main target.

“The plan was to take it relatively easy but you still need to ensure you don’t take it too easy and get knocked out. I think I did OK today.

“Now it is a case of rest and recovery and getting ready for tomorrow. After this I will go for a jog, get some food and fluids in me and rest and see the physio as I have a tight hip. Then it’s all about tomorrow.

“The track is so tight which is why there can be so much bumping and occasionally, like today, a faller. My aim is always to stay out of the trouble.”

Sunday’s action will also see Welsh race walking star Bethan Davies start as favourite for the 3,000m, while Adele Nicoll is set to compete in the shot put just days after representing Great Britain in the bobsleigh at the Beijing Winter Olympics.