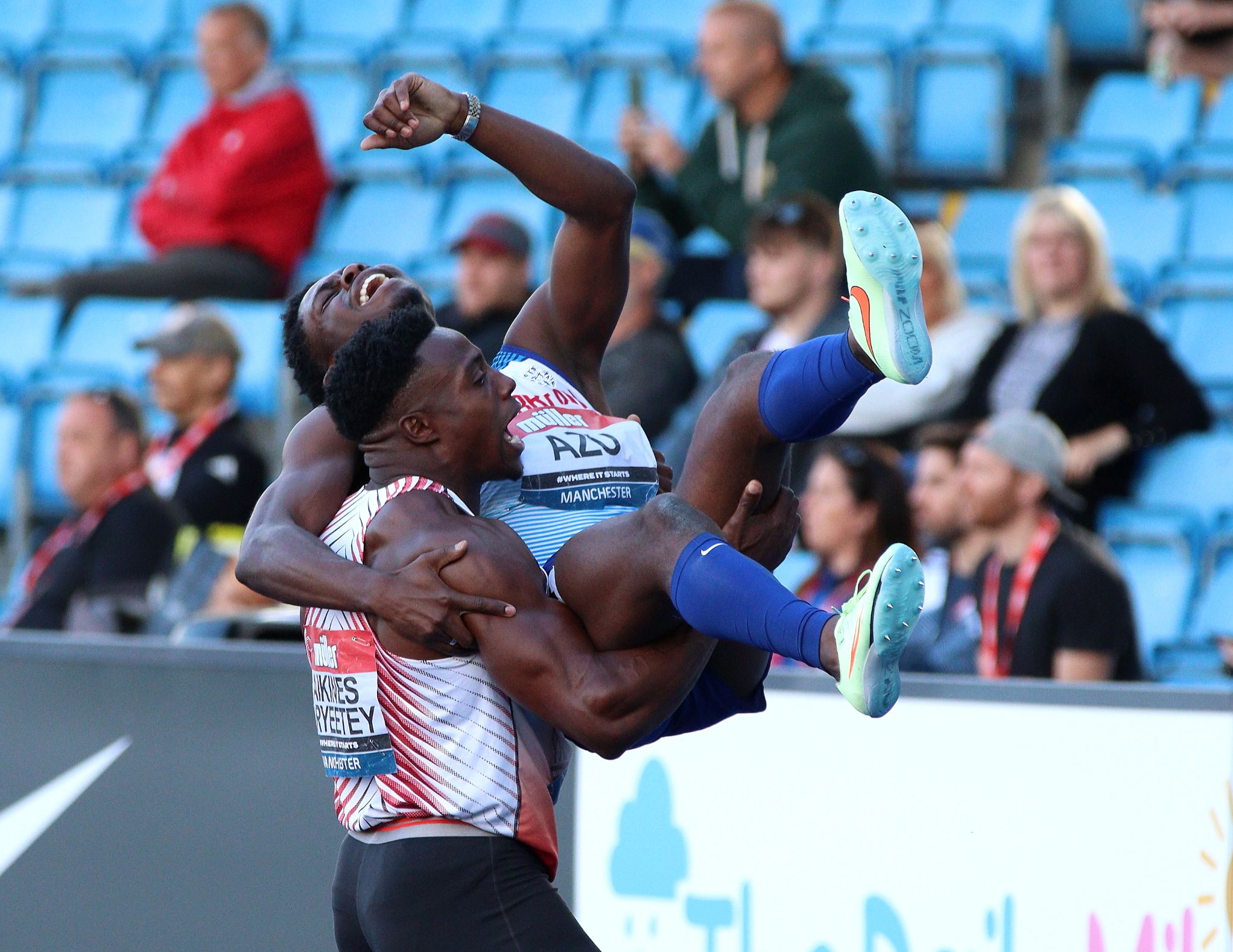 Jeremiah Azu is lifted into the air by Harry Aikines-Aryeety after his stunning 100m victory in Manchester. Pics: Owen Morgan.

Jeremiah Azu says he wants to change British sprinting forever after winning the Muller UK Athletics Championships 100m title in the fastest time ever run by a Welshman.

Cardiff’s reigning under-23 champion blasted to a remarkable wind-assisted time of 9.90 to win the final in impressive style.

In his semi-final, Azu had become the first Welsh sprinter to dip below the much-coveted 10-second barrier with or without the aid of the elements when he clocked 9.94 with a strong 5.6m/s wind at his back.

The 2.5m/s tail wind in the final means Christian Malcolm’s official 21-year-old Welsh record of 10.11 is safe for now, but it must surely be under threat this summer.

After becoming the first Welshman to win the UK sprint title since Ron Jones achieved the feat in 1969, Azu said: “I’ve had ‘2022 British champion’ on my phone screen since last year so to stand here and actually say it, I can’t believe it.

Azu certainly made a big step towards that ambition in Manchester on Saturday evening as he ran away from a quality field in the final featuring pre-race favourite Reece Prescod (9.94) and reigning European Champion Zharnel Hughes (9.97).

As he crossed the line Azu erupted into an exuberant and emotional celebration with friends, relatives and fellow athletes.

Fifth-placed Harry Aikines-Aryeety swept the diminutive Welshman up into his arms as Azu burst into delirious laugher, which soon turned to tears of joy as he celebrated with family trackside.

When he’d gathered his composure, Azu said: “All year I’ve been saying it. I knew I was going to do it, but I still can’t believe it.

“The last few weeks haven’t been great in terms of preparation for the Champs, however, I got through it and my family and coaches are here and I couldn’t do it without them.

“In the semi-final I lost some forward momentum and I knew I had to get that second step right today in the final and I got out the blocks extremely well.

“By the time I hit the 80m mark, I felt really relaxed and knew I was in the lead and I dipped for my life.”

Already selected to represent Team Wales at this summer’s Commonwealth Games in Birmingham, Azu must now wait to see if he will be selected for Great Britain at next month’s World Athletics Championships in Oregon.

Despite winning what was effectively the World Championship trial on Saturday, the 2.5m/s following wind means Azu’s winning time is not eligible as a qualifying standard, which is set at 10.05. The Helen James coached athlete’s official personal best is 10.16.

One Welsh athlete who did achieve the selection criteria for Eugene on Saturday was Melissa Courtney-Bryant.

The Poole AC star, who already had the qualifying standard of 4.04.20, finished second in the 1500m final to Laura Muir.

With the Scot having built up an unassailable lead, Courtney-Bryant stayed ahead of the chasing pack to claim the silver medal in 4.17.72.

Courtney-Bryant, who only ran competitively three times last year due to injury, said afterwards: “It is such a relief to have made the team.

“It is the third time I have tried to make a worlds team, I have been trying since 2017 and last year I was watching the Olympic trials at home on crutches and in a boot.”

There was further Welsh medal success in the field events on day two of the championships.

Commonwealth Games-bound Osian Jones claimed silver in the hammer.
The Liverpool Harriers athlete propelled himself onto the podium with a fifth round effort of 69.68m, finishing behind seven-time UK Champion Nick Miller’s 73.84.

Meanwhile, in the men’s shot put Patrick Swan claimed a bronze medal behind eight-time champ Scott Lincoln and Youcef Zatat with a third round distance of 17.24.

There was however disappointment for two of Team Wales’ Commonwealth Games contingent.

Cardiff’s Jake Heyward missed out on a bronze medal in a stacked 1500m by just three hundreds of a second despite a desperate last gasp dive for the line.

Swansea Harrier Joe Brier suffered a similar fate as he finished fourth in the 400m final in a time of 46.34.

Full results from day two of the championships can be found on the British Athletics website.