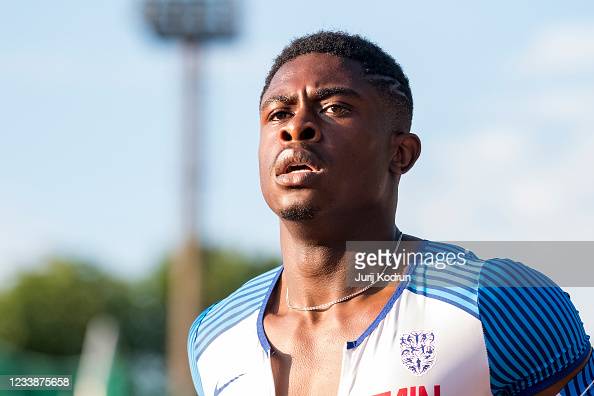 Jeremiah Azu cruised to European Under-23 Athletics Championships 100m gold with an imperious display of sprinting in Estonia.

The Cardiff athlete left the rest of the field in his wake – even allowing himself a celebration 10 metres from the finishing line on Friday evening in Tallinn.

The win provided redemption for Azu after he had European Under-20 gold snatched from his grasp by injury two years ago.

GOLD for @Jeremiah_Azu Fantastic race in tricky conditions to win in 10.25s https://t.co/N1aAL0eBBM

On that occasion, the then 18-year-old was just yards from victory in the 100m final when he pulled up sharply, clutching his hamstring.

But there was no such agony in the closing stages in Tallinn this time around as Azu crossed the line in 10.25 – well ahead of second placed Henrik Larsson, of Sweden (10.36), and Spain’s Arnau Monne (10.41).

“It feels so good. It is such a relief because last time I was here I didn’t walk off the track, but I am so grateful that I have done it this time,” said the sprint prospect afterwards.

“It was 100per cent what I came here for. I was only ranked eighth coming into this final, so I have kept under the radar a bit, but I felt I had it in there.”

The final took place with the sun shining down on a drying track after heavy rain had left large puddles on its surface, so there was no repeat of the Welshman’s personal best-breaking exploits in Thursday’s heats.

Azu had booked his place in the final as the fastest qualifier having won his heat in a blistering new PB of 10.19 – making him the second fastest Welshman in history.

The time also met the Welsh qualifying standard for next year’s Commonwealth Games in Birmingham.

However, his winning time in the final was still his second fastest time ever, despite the wet track and thoroughly deserved triumphant celebration.

A smiling Azu looked hugely relaxed and confident as the field lined up ahead of the final at the Kadriorg Stadium.

And that confidence was more than vindicated once the starter’s pistol sounded.

After an even start the 20-year-old, coached by Helen James, eased away from his rivals at the half-way point and there was no doubting the result as he raised his left arm to point triumphantly in the closing stages.