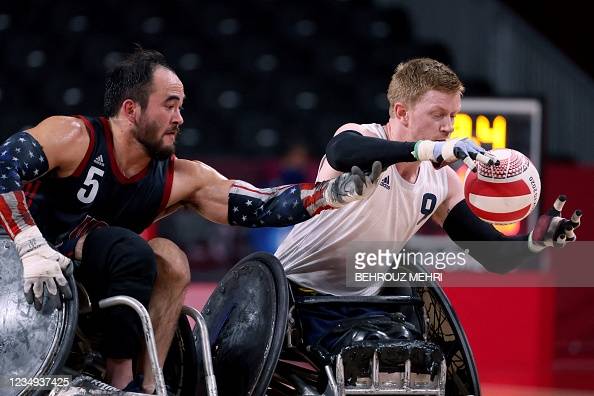 USA's Charles Aoki and Britain's Jim Roberts fight for the ball in the wheelchair rugby gold medal match during the Tokyo 2020 Paralympic Games at the Yoyogi National Stadium in Tokyo. Pic: Getty Images

The man who has scored more international tries than any other Welsh rugby player – Jim Roberts – has announced his retirement from wheelchair rugby. He goes out at the top, having scored 24 tries in a Paralympic final, and 208 tries across two Paralympic Games, but insists there will be no U-turn from his wheels, as he tells Graham Thomas.

Jim Roberts insists he has no regrets over his decision to retire – even though wheelchair rugby is poised to enjoy its biggest moment in Wales in 2023.

Roberts – the try-scoring inspiration behind Great Britain’s historic gold medal at the Tokyo Paralympics this summer – has decided to call it a day at the age of 34.

He admits there was a bit of arm-twisting within the sport to try and get him to stay on until 2023, when Wales will host the Wheelchair Rugby European Champions at the Principality Stadium, but that’s kind of the reason for him stopping.

Arm-twisting is more painful than it used to be – now he is into his mid-thirties after almost a decade as a Great Britain international.

“There were a few factors,” says Roberts, the Welshpool-born star who scored 24 tries in Great Britain’s 54-49 defeat of the USA in the Paralympic final in Tokyo.

“One was the long term injuries I have, which are getting progressively worse the longer I play in the chair.

Retiring at the top 🥇

Gold medal star, @Jim__Roberts ends his career on his own terms as the European Championships 2023 come to Wales 🏴󠁧󠁢󠁷󠁬󠁳󠁿

“Playing wheelchair rugby aggravates them and makes them worse. That was an issue that hadn’t really been resolved.

“Once I get done with playing rugby, I would quite like to be able to use my shoulders for the rest of my life!

“But there is also the fact that I work full-time. I have been trying to fit that in with being a full-time athlete, which is difficult and doesn’t leave much time for much else.

“I have other things that I want to achieve in life and so I had to cut something out. Rugby was the one that went.”

It’s the kind of calm, objective reasoning which Roberts brought to the hectic, over-heated world of wheelchair rugby, with its clattering collisions, occasional spills and non-stop action.

Since he became a GB international back in 2013, Roberts’ cool-headed approach has been a feature of GB’s ascent up the world rankings.

It helped deliver a fifth-place finish at the Rio Paralympics back in 2016, a European Championships title in 2017, and again in 2019, and then Paralympic gold in Japan at the delayed Games this summer.

Now, though, it’s time to rest those wheel-pumping shoulders and use that ice-cold concentration more frequently in the day job – as an architect with Corstorphine and Wright Architects in London.

“I haven’t played without some sort of pain for two or three years,” he admits.

We want to wish @Jim__Roberts all the best for the future and happy retirement!

“I had physio which was managing it and I had surgery last Christmas, but that didn’t really help.

“I have been trying to get it under control but it’s always been there in the background.

“I have arthritis in my shoulders already and I have hip issues. These have come from playing rugby and they are things I’ll just have to live with.

“But it just gets to a point where you’re not willing to make the sacrifices any more.

“There are not many athletes who get to sign off at the point where they want to after a big one like Tokyo. So, I feel quite privileged to be in that position.

“At the moment, I will be focusing on my architecture career and progressing that. The firm I work with, Corstorphine and Wright, have been really helpful and allowed me time off to go and train but now it’s time for me to put that time back in.”

Roberts will still be involved in the sport, though, to some degree as he has agreed to join the delivery board which will oversee those European Championships in Cardiff in 2023.

“It’s a great coup to have our sport in the best stadium in the world. It’s going to be interesting to see how they can fill it because it’s a big stadium for our little sport.

“I’m a bit disappointed it didn’t come around two years sooner and then I could have been playing on that pitch.

“A few people in GB thought it might entice me to stay a little bit longer, but my mind has been made up.”

Those trying to change his mind probably knew it was a long shot.

Roberts – who contracted bacterial meningitis whilst at university and had both legs amputated – has always been his own man.

Whether it has been his vocal criticism of cuts to funding in disabled sport, or his conviction that wheelchair rugby needs a few rule tweaks to make it an even better sport, the former cross country runner tends to plough his own furrow.

“I think the sport is moving along the right lines,” he says.

“It was one of the most watched sports at the Games and was trending on Twitter and TikTok. It’s one of those Paralympic sports that really does capture the imagination of the public.

“But I think there are a couple of rule changes that could make it better. I have been on the technical committee over the years, but I haven’t managed to get any of those changes implemented.

“My enjoyment in the sport had waned a little bit. The better I had become, the more clinical I became when playing.

“I tried to take all the emotion out of playing, because that is what drives mistakes. It was not as much fun to play any more.

“Winning was nice and being in the Olympics was great, but it has not been as enjoyable as when I first started.

“Wheelchair rugby is a very different sport. There is not sport with a conversion percentage rate anywhere near as high as wheelchair rugby.

“When we get the ball, we are expected to score well over 90 per cent of times. Even in the NBA basketball, they are only averaging around a 60 per cent conversion rate.

“So, it comes down to who makes mistakes. If you are playing on emotion, then you are more likely to make those mistakes. That was something I knew helped my game – to take all the emotion out of it.”

For fans, though, there is bound to be plenty of emotion – plus excitement – when those Euros come to town the year after next.

“In terms of rugby it doesn’t get better than the Principality Stadium. It’s the best in the world.

“I hope we can do it justice and get a lot of people in Wales more interested in wheelchair rugby – maybe people who didn’t know much about it.

“It is not much like rugby, so it helps if you get a basic understanding of the rules. You need a good commentator who knows the sport, but the main thing is just to get people in the door and experience it.”