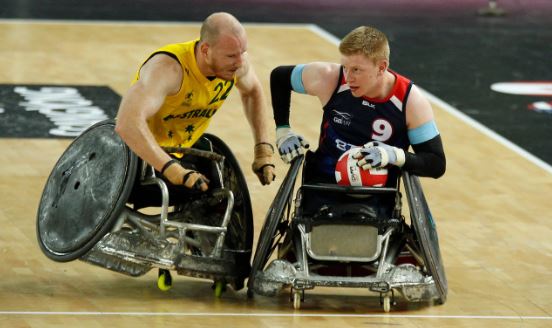 As the months tick down to less than one year to go to next year’s Paralympics, Graham Thomas looks at the Welsh athletes who have already booked their places – and those striving to join them.

Jim Roberts is rarely slow off the mark as one of the UK’s leading wheelchair rugby players and he has got there ahead of the rest when it comes to next year’s Paralympics.

Welshpool-born Roberts became the first Welsh athlete to book his place for Tokyo next year as the countdown begins to the Games which are now just less than a year away.

There are likely to be plenty of others boarding the same plane, though. Three years ago, Roberts was one of 26 Welsh Paralympians who went to Rio de Janeiro – an impressive 10 per cent of the overall GB team – and it looks like being a similar sized Dragonhood who head to Japan.

Roberts seized his own place as part of the GB wheelchair rugby squad that recently won the European Championships in Denmark.

They beat the host nation in the final, 55-45, in a tournament that acts as a Paralympic qualifier.

“It’s good to get the Tokyo qualification sorted,” said Roberts after the semi-final victory over the Swedes had guaranteed them their ticket to Tokyo.

It won’t be the first time the former Welsh cross-country runner has been to the Paralympics. He was 26 when he went to Rio, where Team GB finished fifth in 2016, and is keen to get onto the podium next year.

Team GB are currently ranked fifth in the world and will have to battle with the likes of Japan, the reigning world champions, and Australia, the current Paralympic champions, for the medals in Tokyo.

Joining Roberts in Japan will be the inspirational Phil Pratt, the Newport-born captain of Great Britain’s wheelchair basketball squad.

In September, Pratt led his team to glory at the European Championships in Poland, where they beat Spain in the final to earn their passage to Tokyo next summer.

“We’re really proud to win the European Championships – it has been a long and tough summer with the squad and I am so proud of this team,” said Pratt.

“Going into Tokyo we are now one of the favourites which will be a new experience for us. We have always been the ones chasing the Spanish or chasing the Americans.”

Another Welsh athlete who got his ticket stamped in September was table tennis veteran Rob Davies.

The former rugby player took his fourth consecutive European title in the Class 1 final in Sweden to clinch an automatic place in Tokyo where he will bid to defend his gold medal.

Jodie Grinham, from Cardigan , took silver in Rio four years ago in the team archery event, together with partner John Stubbs, and is ramping up her preparations in order to make her mark again in Tokyo.

After overcoming serious illness this year, Grinham is focussing on the forthcoming UK championships and says: “It may be a year to go but that’s no time at all when you’re competing, training and you’ve got so much to do.”

He may not be quite there yet, but a Welshman who may soon start leafing through his Japanese phrasebook is Para-rower, Ben Pritchard.

His rise has been phenomenal as when the last Paralympics was in full swing, in 2016, Pritchard was in hospital trying to come to terms with a new life following a cycling accident.

The crash that left him paralysed from the rib cage down eventually opened up a new world on the water and earlier this summer he secured a GB spot in Tokyo for the men’s singles sculls.

That place is still up for final selection, but when Pritchard finished fourth at the recent world championships he made himself favourite to claim it.

Should he do so, the Swansea rower will be able to spend the next few months picking the brains of the other Welsh men and women who are likely to be returning to familiar territory at the Paralympics.

Top of that list of experience is Aled Davies, the 28-year-old discuss and shot put thrower who is likely to be heading towards his third Games after London 2012 and Rio 2016.

A gold medal winner in both events in the F42 category, Davies is currently preparing for the World Para Athletics Championships in Dubai in November.

He will be defending his world title, along with two other Welsh world champions – F46 javelin thrower Hollie Arnold and T38 long jumper Olivia Breen.

Barring injuries or other mishaps, all three should be heading towards Tokyo for the Paralympic Games, which begin on August 25 and run through to September 6.

So, too, in likelihood, will be Sabrina Fortune, an F20 shot put newcomer in Rio three years ago, and Harri Jenkins, the Neath-based athlete and former Great Britain wheelchair basketball colleague of Roberts, who competes in the T33 100m out in Dubai.

Then, there are two more Welsh stars out in Dubai with better than even Paralympic prospects. One is sprinter Jordan Howe, who will take to the blocks in the T35 100m.

The other is Kyron Duke, an F41 shot putter who earlier this season broke the world record at the Bayer Invitational in Leverkusen, Germany.

There are other Welsh para-athletes too, in a variety of sports, for whom the next few months will prove decisive as they chase down places for Tokyo.