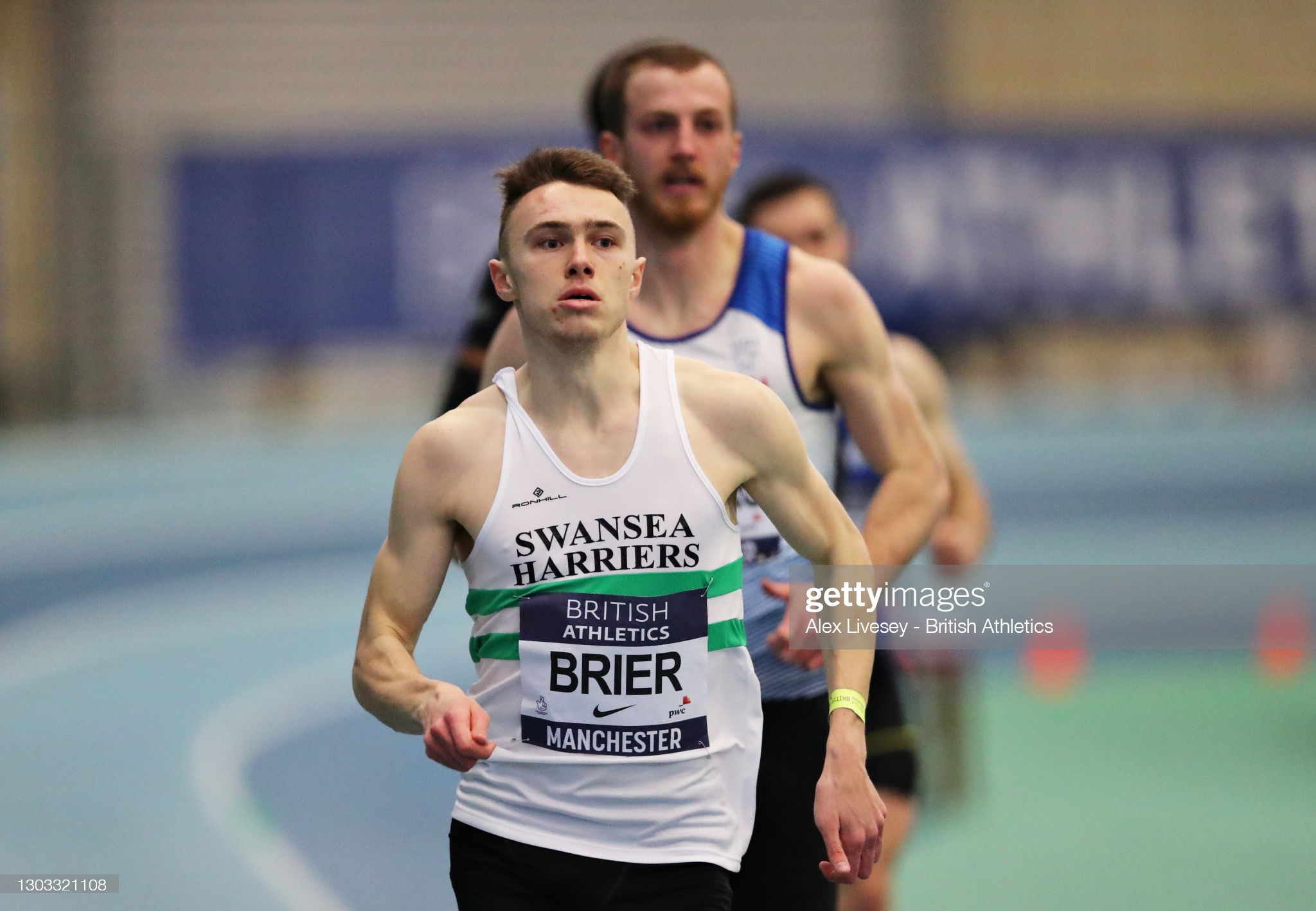 Joe Brier was second in the 400m as he heads off to Tokyo. Pic:Getty Images

Joe Brier and Piers Copleland put themselves in pole position for selection at next month’s European Indoor Championships with superb wins at Sunday’s Great Britain trial event in Manchester.

Swansea Harrier Brier produced a magnificent new personal best and qualification standard of 46.81 to win the 400m A final.

While Copeland, who last weekend claimed a new Welsh indoor record and qualifying standard, won the 1500m final in 3:52.17.

It was Brier though who produced the Welsh performance of the day as he slashed a third of a second off the indoor personal best he set in winning his heat on Saturday.

The European Under-23 and World Under-20 medallist led from start to finish as he clocked his third indoor PB in a row and his first ever senior qualifying standard.

And it was a Welsh one-two in Sunday’s final as Cardiff Athletics’ Owen Smith finished second in 47.40, which should put him in contention for at least a relay spot at next month’s European Indoor Championships in the Polish city of Torun.

A “buzzing” Brier said after his victory: “That’s probably the first race this year I’ve committed to, I wanted to get out, get to the front and control it from there.

“I gave it everything down the home straight and I came away with a standard for the European Indoors so I’m well chuffed with that.

“Me and my coach [Matt Elias] had a chat this morning about tactics and what might happen. At the end of the day you can only concentrate on yourself and my plan was to go out there, get to the front and really control the first 200m, open up on the backstraight and finish strong.

“I’m on cloud nine at the moment, I’ve never hit a standard like that before and it’s my first senior standard so I’m really chuffed.”

Copeland’s win in the 1500m saw him come out on top in a cagey tactical race, kicking away in the final 50m to take the win from second place Archie Davis and the remainder of a high quality field.

This weekend’s small COVID-19 secure trials were held at three different venues in Manchester, Loughborough and London, in order to give athletes the chance to gain selection for the Great Britain team following the cancellation of the British Indoor Athletics Championships in Glasgow due to the pandemic.

There were other notable Welsh performances across the weekend’s action, which included a third place for Birchfield Harrier Adele Nicoll in the shot put at Loughborough, registering a best throw on the day of 15.61m.

Deeside’s World Para Athletics Champion Sabrina Fortune was fifth with a best of 13.09m – her second best indoor distance ever.

Fortune, like so many of the athletes, was delighted to be competing once again. “Today was an amazing experience, especially with lockdown having not been able to throw.

” So, to be here and to be able to throw is really heart-warming. I was just so excited. I feel so bouncy, I am just so happy.

“The throws weren’t bad they went up and that’s the main thing. It just kept going up and up and up. I wanted 14 but you can’t always do it.

“Plus, I haven’t been able to throw for such a long time, it’s just an amazing experience to get to throw it and see the distance.”

In the long jump competition held at London’s Lee Valley on Saturday, 2017 World Para Athletics champions Olivia Breen claimed a new personal best of 4.65m as she finished eighth, while Cardiff Athletics star Rebecca Chapman was sixth with a best jump of 6.01m.

Also on Saturday, Swansea Harrier Verity Ockenden produced a fantastic performance to win the 3,000m in 8:56.27. Jenny Nesbitt, of Cardiff Athletics was 5th in a time of 9:06.14

English international Ockenden said afterwards: “I’m on a roll. I am so glad I did the race here last week as that really set me up well for this one, so thank you for Vicente (Modahl) for that. I really wasn’t that confident in my preparations coming into that. I’ve just been doing what my coach, Tony, says.

“I’ve been going through the motions so I’ve been unsure if it would be good enough or not. It has all come good despite the difficulties which everyone has had. Being tough and being able to cope with change is a big asset.”

Cardiff Athletics team mate Jeremiah Azu finished fourth in his 60m heat in a time of 6.90.

The Great Britain team for the European Indoor Championships in Torun – to be held between 4 and 7 March – will be announced on Monday, February 22.

Full results from the weekend can be found on the British Athletics website.