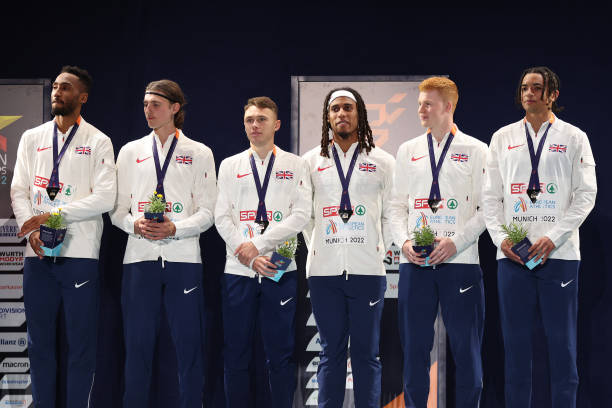 The Swansea Harrier ran the opening leg in the semi-final as Britain qualified for Saturday night’s final in Munich.

Brier ran 46.58 to put GB into fourth place at the end of the opening leg before handing over to Rio Mitcham.

They were still in fourth when Alex Haydock-Wilson was handed the baton for the final leg, but the anchor runner managed to lift the team into third place as he crossed the line behind the Czech Republic and France to earn an automatic place in the final.

Brier, who had failed to qualify for the individual final by just 100th of a second earlier in the week, said afterwards: “It feels good definitely just to get through. I was quite annoyed with my individual race on Monday.

“I didn’t execute the race well so I wanted to come to the relay and really give it my best shot and help the guys get through.”

Although Brier wasn’t selected for the final, which saw GB claim gold in a time of 2:59.35 ahead of Belgium and France, he was presented with a gold medal along with the rest of the team at the medal ceremony on Saturday night.

A fast early pace saw Lewis in the lower place group of competitors as a leading group broke away, but she made good progress by climbing to 14th spot at the 5km point.

Lewis held her technique well as she passed the halfway mark in 15th spot in 46:54, one minute and 52 seconds behind race leader Maria Perez (ESP).

As the conditions deteriorated and others around her picked up time penalties and disqualifications, Lewis kept her form and made amends for her disqualification in Berlin four years ago.

The Pembrokeshire athlete finished in 13th place, clocking 1:35:36 – the best performance by a British woman at the championships since Jo Jackson in 2010.

However, Lewis wasn’t entirely happy with her performance: “To be honest I am pretty disappointed. I felt great at halfway but then after halfway I had nothing really to give, so I’m a bit disappointed in the way I felt.

“But you know the end result wasn’t as terrible as I thought so it’s fine. It’s been great to be out here and representing Great Britain – it’s a privilege, I’m just a little bit disappointed.

“I’ve worked really hard on my technique and know when I get any cards how to deal with it, so that’s come a long way and I’m really pleased

“I need to try to get a little bit fitter to be able to be stronger physically through the second half and to be able to push on and do a quicker second part.”

Cardiff’s Jeremiah Azu is part of the GB 4×100 squad due to contest the final on Sunday night.