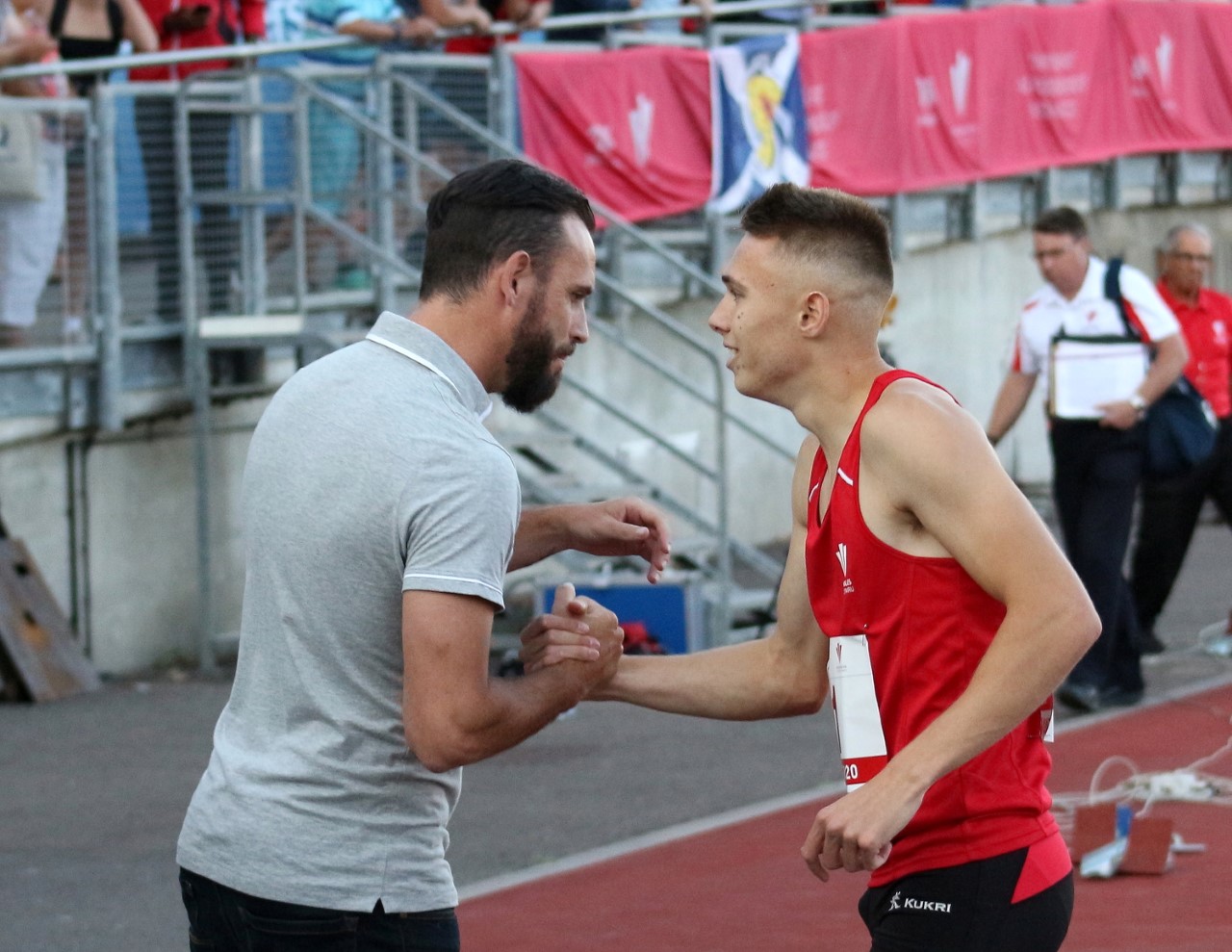 Remember Matt Elias? He of the bright red hair, the pink hair, the blue hair, and the nifty turn of speed around the track, along with the likes of Iwan Thomas? Well, the hair’s not back, but the speed just might be, as Owen Morgan reports.

Wales could be on the verge of another golden era of 400m running, says the man who was part of a wave of Welsh one lap wonders.

Matt Elias – who, along with the likes of Iwan Thomas, Jamie Baulch and Tim Benjamin, enjoyed huge success on the international stage – believes a new generation of young Welsh athletes could follow in their footsteps.

Now a coach, Elias was speaking after watching one of his charges, Joe Brier, break the 400m stadium record at Swansea University’s Sports Campus in the Welsh Athletics International earlier this week.

Brier’s win in Swansea came shortly after winning a bronze medal as part of Great Britain’s 4x400m squad at the World Junior Championships in Finland.

The Swansea Harrier has been under Elias’ wing since starting at Cardiff Metropolitan University last year.

Coach and athlete agree the 19-year-old has made huge strides since making the move to Cardiff and joining Elias’ group of talented young sprinters which includes fellow 400m man Owen Smith, who will next month compete at the European Athletics Championships in Berlin.

Brier said: “I went to uni in September to Cardiff Met, so I changed coaches to Matt Elias and the amount of work he’s put in with me is amazing. I just feel a lot stronger and a lot quicker.”

Elias says much of that improvement is down to the attitude Brier has shown since joining his group.

“He’s a great kid,” said the former European Championship relay gold medallist, who is also in charge of sprints and hurdles for Welsh Athletics. “He’s come to Cardiff and applied himself so well.

“But it’s more the maturity I’ve started to see in him as a person. He’s starting to take athletics a little bit more seriously.

“It’s doing all the little things, all the mobility that he needed to do, foam rollering, recovery work, all the stuff that aren’t the fun things to do but they are the things that actually make a difference.

“To have seen the change in him and the level of professionalism he’s starting to bring to what he does now, it’s really exciting to see as a coach.

“There’s no doubt that he has the physical ability to run 400m, he’s shown that this year. He’s actually a really exciting prospect because I think he’s only just starting to scratch the surface of what he’s capable of.”

Elias believes that with Brier and Smith training together, they can push each other to even greater heights.

Smith, originally from North Wales, has enjoyed an excellent season, representing Great Britain at the World Indoor Championships at the start of the year, racing at two Diamond League meetings, and now preparing for the European Championships in Berlin.

Elias says: “Potentially, we could see two Welshmen start to creep back up to the top of British 400m running.

“It’s very evident in an event like the 400m that you need training partners, you need people to push you on. It’s the type of event that’s very hard in training, so you can’t really do it in isolation.

“You need to form these groups and with those two and a couple of other university students, they are starting to form a really good performance group with the right mindset.”

Elias believes this group of runners could spark a return to the halcyon days of Welsh 400m running in the years either side of the Millennium.

The former Welsh 400m flat and 400m hurdle champion was part of the 4x400m quartets which memorably won bronze and silver medals for Wales at the Kuala Lumpur and Manchester Commonwealth Games in 1998 and 2002.

The Cardiff man, who was known for his colourful hairstyles during his running career, also won individual silver in the 400m hurdles at the Manchester Games, as well as relay gold at the 2002 European Athletics Championships.

In 2004, he and Benjamin narrowly missed out on an Olympic 4x400mbronze in Athens as part of the Great Britain relay team.

Thomas and Baulch, as well as enjoying huge individual success, were part of the Great Britain team which retrospectively won gold at the 1997 World Championships and reached the final at the 2000 Olympics in Sydney. Baulch also gained a silver medal at the Atlanta Games in 1996.

Elias says: “I think we could see a slight resurgence over the next few years with 400m running in Wales.

“Owen has now been selected for the Europeans, Joe’s obviously won a medal at the world juniors this year, so hopefully they can use these things as a launch pad for success over the next few years.

“Myself, as their coach, I’m really excited to be working with them, they are two good kids, they get on really well together.”

Brier isn’t the only talented sprinter in his family. Big sister Hannah has represented Wales at the Commonwealth Games and Great Britain at the world youth and junior championships. She is the current Welsh 100m champion.

Elias believes the younger sibling can shine just as brightly. “I think Joe has a really bright future ahead of him. As I said, we are only just starting to scratch the surface.

“I think he lived in his sister’s shadow for quite a long time growing up so it’s nice to see that he’s starting to get a bit of recognition now. The work that he’s putting in is starting to bear a bit of fruit and yes it will be nice to get another Welshman running 45 seconds and maybe into the 44s.

“I think he has the physical capabilities to do it. It might take another five years to get there but he split 46.2 in the relay at the world juniors and if you look at him he is a very physically young kid.

“He’s got a lot of development to do yet. When he’s standing on the line at the juniors, he looks like a junior. At the world juniors a lot of those people looked like they were grown men to be honest.

“So there’s a lot of physical development and with the level of professionalism he’s starting to bring now, he really could get up to those world class levels.”

Elias is genuinely excited by the potential of Brier, Smith and some of the other sprinters developing in his group, which also includes the likes of World Championship medallist Seren Bundy Davies, who is on her way back from serious injury.

And it’s not only the one-lap runners who are coming through, says  Elias: “You throw into the mix Sam Gordon, who I’m coaching in the 100m, he also ran in the World Cup and the Diamond League and medalled at the British indoor Championships.

“We’ve got a nice pocket of sprinters – short sprinters and long sprinters. They all train together, they all buzz off each other really well. The banter in training is fantastic.

“It’s the most excited I’ve been during my coaching career about this group moving forward. They are all 19 to 23, so they’re all young. The next four or five years could be exciting times.”

One thought on “Joe Brier, Owen Smith And Others Are Shining, Thanks To Matt Finish”