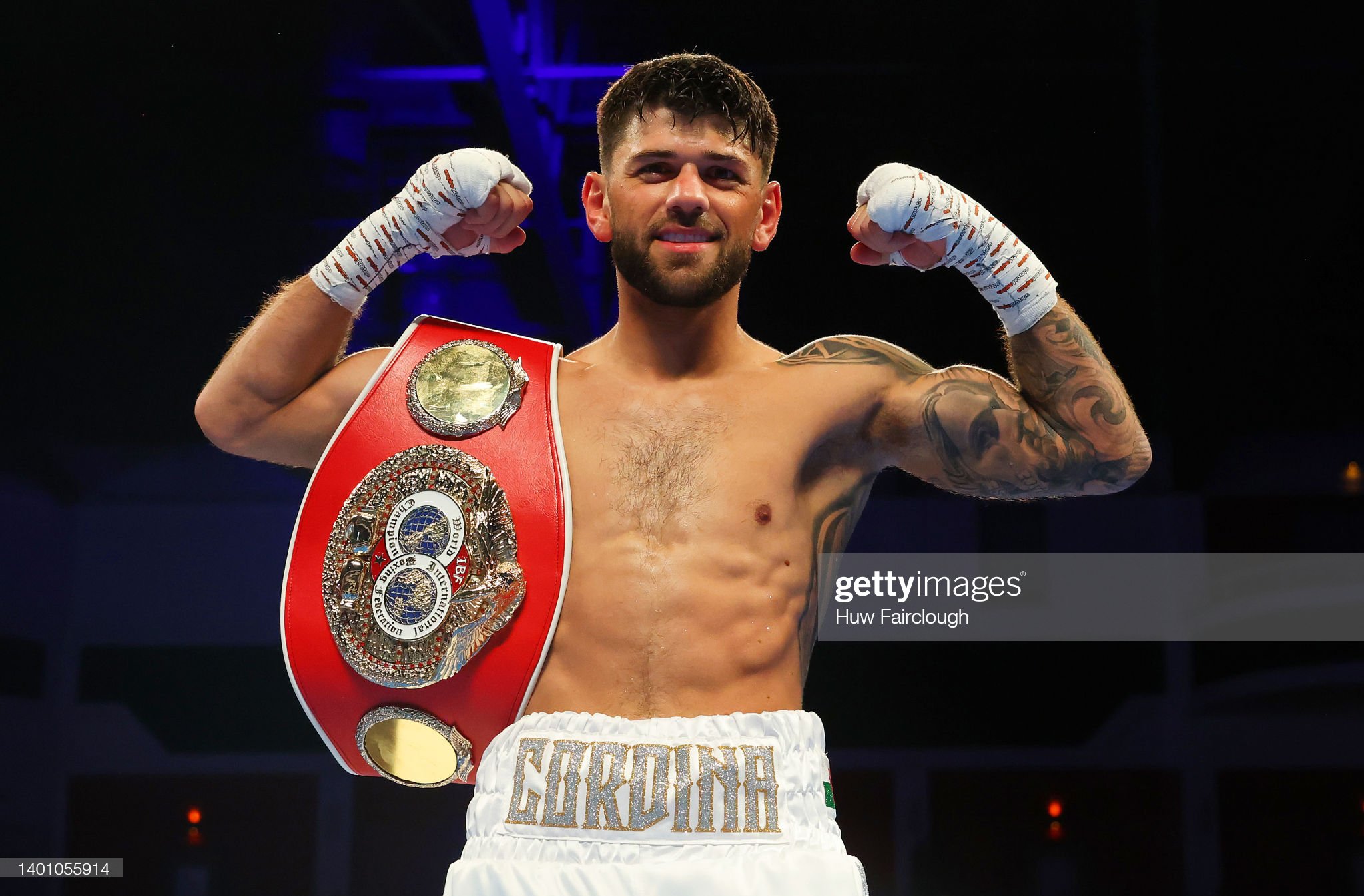 While football and rugby fans continue to squabble over which sport is Wales’s No.1, boxing managed to deliver a timely ‘remember me’ dig with its resurgence into the Welsh sporting psyche.

The metaphorical dig was issued by Cardiff fighter  Joe Cordina who became the 13th Welsh World Champion boxer as he knocked out Kenichi Ogawa in the second round to claim the IBF super-featherweight crown.

Cordina’s moment of glory arrived at the Motorpoint Arena, Cardiff, in front of just 5,000 people; his devastating right hook that ended Ogawa’s reign deserved to be witnessed by 50,000, such was the delivery.

The world-title fight on Saturday, June 4, was seen as the appetiser to the main course served up by Welsh sport that weekend. The following evening, Gareth Bale and Co defeated Ukraine 1-0 to book their place at football’s top table in Qatar in November.

Timing is everything they say.

It was somewhat unfortunate that Cordina’s crowning moment went a little under the radar, as his accomplishment deserved to be met with the same nationalistic hysteria as the exploits of the men with the emotional backing of the much-heralded Red Wall.

No luck around here just straight graft and dedication pic.twitter.com/GKP9ULJxcG

Boxing has a rich history in Wales.

Percy Jones started it all off when he became Wales’ first world champion with victory over Bill Ladbury, making him the world flyweight champion in 1914. Jones is still regarded as one of the biggest pound-for-pound punchers the world has ever seen.

You don’t acquire the nickname  ‘The Ghost with the Hammer in his Hand’ without being able to bang a bit.

Two world boxing champions in the same year was a great source of pride for the people of Wales.

As the years passed, another 11, including Cordina, have had the honour of winning a world title.

Driscoll fought for the world title against Abe Attell in 1910, it was a fight Driscoll dominated, but the ‘no decision’ rule meant no winner was declared unless there was a knockout. Driscoll, clearly a man of principle, declined a rematch to attend an exhibition match in aid of the orphans of St. Nazareth House in his home city of Cardiff.

Despite not becoming a world champion,  Driscoll became a member of the International Boxing Hall of Fame, Ring Magazine Hall of Fame and the Welsh Sports Hall of Fame.

Owen was knocked out in round 12 and had sustained a blood clot to the brain during the fight and, despite three operations, contracted a  second bout of pneumonia which sadly ended his life.

Another notable name not to be crowned world champion was Gorseinon’s, Colin Jones.

Welterweight Jones, known for his punching power, was only 17-years old when he fought for Great Britain at the 1976 Olympics in Montreal, Canada.

Jones became British, Commonwealth and European welterweight champion, earning him a world title fight with American Milton McCory. The fight ended in a controversial draw, with many in attendance at the Reno-Sparks Convention Center believing Jones had won.

Jones went on to have another title crack against IBF world champion Don Curry. A split nose in the first round saw Jones battle on bravely before the fight was stopped in the fourth. Jones retired from boxing after the fight.

The name that stands out head and shoulders above the rest of the 13 Welsh world champions is Joe Calzaghe.

In many people’s eyes, Calzaghe is the greatest sportsman Wales has ever produced.

Professional debut✅
So the NEW journey has begun🤩
Amazing atmosphere and experience last night….Id like to say a massive thank you to everyone who bought a ticket or tuned into watch on @skysportsboxing

Stay tuned, this is just the start 💫 pic.twitter.com/HwVgsP0Npw

It is hard to argue with that statement when you consider Calzaghe retired, having won all 46 fights to make him one of only 15 fighters to retire as an undefeated world champion.

So what about Wales’s new world champion Joe Cordina?

“It is a lifetime of work gone into five and a half minutes of work. I’m just so thankful,” Cordina said.

“I’ve been throwing some big punches in this camp, I’ve been in with the likes of Conor Benn and sparred with him, and he is one of the most explosive boxers. So we’ve been working hard in the gym.

“We’ve been working on that punch all camp, and it’s an amazing feeling when you put hours and hours into it, and it comes off in the fight, and it’s lights out.”

Shavkat Rakhimov is the mandatory IBF title challenger. However, American Shakur Stevenson, who holds the WBC, WBO, and Ring titles, quickly called out Cordina, who he mistook for being English, on social media.

“Told y’all he the best fighter @ 130 from England. I would love to come to England for some [smoke] tho champ congrats Joe Cordina,” Stevenson wrote.

“Respect, bro,” Cordina replied. “Enjoy my break, and we’ll talk soon for sure.”

A few days later, Cordina Tweeted the American a picture of the Principality Stadium with the question: “What you reckon champ?”

Stevenson’s reply was quick and emphatic: “Oh s**t, let’s do it”.

Regarded as the best 130lbs fighter on the planet, Stevenson would prove some step up n class for Cordina, but it is a fight he would relish.

“It’s a fight that I’d love, and I’m a fan of his because I’m a boxing fan first and foremost. But I back myself against anyone, and it’s a fight I’d love,” said Cordina.

“Any challenge I’m willing to hit head-on. I’ve been shouting for a world title for ages, and I’ve got one now. So I’ll be looking to unify.”

Cordina v Stevenson at a sold-old Principally Stadium would appeal to many, not least the Welsh Rugby Union, who always carry their begging bowl. Still, Wales’s latest world champ may be advised to think carefully before dancing with Stevenson.

Many respected figures in the boxing world see Stevenson as a multi-weight world champion with a similar skill set as a certain Floyd Mayweather. However, only time will tell if the hype surrounding the American is justified.

Many people inside boxing believe Cordina can go on and unify the divisions. However, after a stop-start career as a pro, it is hard to say with any degree of certainty if that will prove the case.

In her first pro fight, Price looked accomplished in everything she did, as she impressively used her speed and superior footwork. Fought over six two-minute rounds, Price hit her Icelandic opponent at will, and her movement helped to walk Gudstensdottir into punches.

It seemed as though Price was happy to go the distance and take a 60-54 victory in order to gain experience.

Price’s all-around sporting pedigree has never been in doubt.

The golden girl from Ystrad Mynach is a four-time world champion and six-time European champion in kickboxing and has also competed in Taekwondo; and she has also captained Wales in football at under-19s level and won two caps for the senior side.

In her first pro fight, welterweight Price was so accomplished that she looked like she could already give world champion Jessica McCaskill plenty to think about.

Although it is early days in Lauren Prices’s professional boxing career, it will come as a shock if she does not go on to be crowned world champion and add to the rich tapestry of Welsh sport.