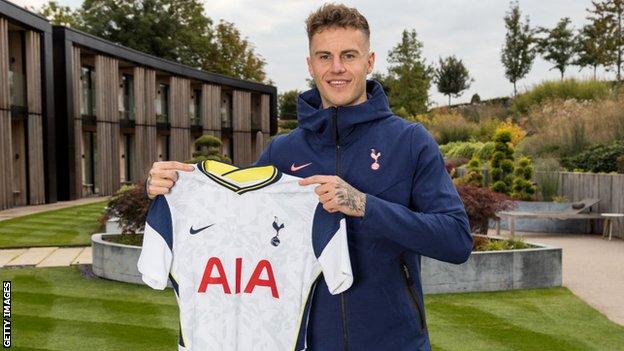 Joe Rodon has signed deal at Spurs until 2025.

Winter has not confirmed the fee – reputed to be £11million + add-ons – the Swans received from Tottenham on deadline day just hours after manager Steve Cooper put him in the £25m bracket.

But he insisted the fee was ‘significant’ and also allowed Cooper to strengthen the depth of his squad for the Championship as well as putting the club on a sounder financial footing during the COVID-19 crisis.

“We made a decision on Joe and it went down to the wire. It was a fairly interesting 48 hours,” said Winter of the deadline day departure of one of Swansea’s prize assets.

“I know there are question marks over the fee we got for Joe – even though it was undisclosed – it is still a significant transfer for this club.

“It has enabled the club to be more financially secure in the short to medium term, while it has allowed us to create a much deeper squad in terms of competitiveness for the league we are in.”

While Rodon departured, Cooper was able to bring in Ryan Bennett as a replacement and also add Ryan Manning , Joel Latibeaudiere and Kasey Palmer.

Freddie Woodman, Marc Guehi, Morgan Gibbs-White,  Korey Smith, Jamal Lowe and Viktor Gyokeres have all either returned or been brought in on loan or permanent deals during the summer.

Winter, speaking to swanseacity.com, added: “The decision on Joe enabled us to do quite a lot for the team in terms of depth, experience, future potential, players who have won promotion like Ryan Bennett, who replaced Joe directly.

“It has all sorts of challenges, but we aim to compete in every game and adding the players we have puts us in a stronger position to be able to do that.

“Joe is a great loss, a great guy with great potential and is an academy product. He’s moved to a top-six club – this is not just him moving to another club, it was a huge opportunity for him.

“We had to make a decision where we could be financially secure and develop the squad in the way we have.

“I think we have a good platform at the moment in what we all know are incredibly challenging times due to Covid.

“The transfer market has been affected by Covid. You can argue at the top level the amount of money that has been spent in the Premier League, but further down the food chain there hasn’t been much activity.”

“I think that will get more challenging moving into January. We have to understand the market that is in front of us, and plan accordingly.

“I think we got to a good solution – people can question aspects of how we got to it – but on the whole I think we’re in good shape.”

“This football club, to be clear, is in really good shape. We are not burdened by huge amounts of debt, there is a small loan that is recent, but the club is well geared to prepare and plan for life with no fan income for the rest of the season.”