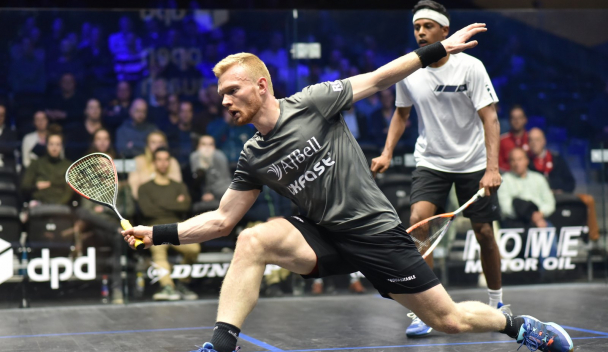 Welsh squash ace Joel Makin is eyeing up a place among the World top eight players.

Pembrokeshire-born Makin goes into the 2019-20 season at number 13 and earned a confidence-boosting win against Egyptian Mohamed ElShorbagy, the former World number one.

“A year ago I was at number 40 and reached a high of 12, but after an injury I have gone back one place.

Makin, aged 24, was born in Haverfordwest before his family moved to Aberdare when he was aged three.

Squash in Wales is on a high right now after Makin made a phenomenal rise up the rankings, while North Wales-based Tesni Evans is at nine in the women’s rankings.

Welsh Wizards finished third in their Premier Squash League group, while the Rhiwbina Open men’s event and Bangor women’s event have attracted some of the World’s best players to Wales.

Makin lives in Birmingham, but is in talks with Wizards team manager David Evans about playing PSL squash for the Welsh team next season.

“I’ve been chatting to David about the possibilities,” says Makin. “Nothing is finalised yet. We are still talking.”

Wizards have a strong Welsh contingent in their team with Tesni and her brother Emyr plus Wales champion Peter Creed and Elliott Morris-Devred in their line-up.

Makin is already in summer training ahead of a big push for a place among the World’s top 10 next season, having taken a break form training after the British Open Championships.

“I look back on matches lost and reflect on what I could have done better,” says Makin. “It’s important to be hard on yourself sometimes.

“You see guys above you in the rankings and feel you could beat them. The key is setting your sights higher and aim rot do better.”

Makin is spending time between a house he has bought in the English Midlands and the family home in Aberdare.

His principle guiding light has been Rob Owen, the former professional who played alongside the great Jonah Barrington.

“Rob has told me that Jonah was always saying to keep a record and analyse all your players, especially the top guys, if this is who you want to replicate,” says Makin.

“It’s always something we’ve taken time to do, watching back matches.”

He started playing squash at Hirwaun Squash Club (now Aberdare SRC) when he was around 11-years-old, while he was also keen on rugby, running, football and more.

Makin has also taken his own game on quickly since leaving Aberdare, aged 18, where both his parents are teachers.

He didn’t play competitive squash until he was 16. Born in Pembrokeshire and then growing up in the Welsh valleys, he had a penchant for physical sport.

“The improvement in my squash started when I moved to Cardiff and worked with Nic Birt, who played a big part for me,” he says.

The former Aberdare School pupil moved to Birmingham and began a degree course in geography, but his progress in squash made it difficult to combine studies, training and playing.

“I took a gap year to give squash a chance and it took over,” says Makin. “I gave up on my degree completely because I was facing a big couple of years in squash and felt I could not be as good doing both.”

Makin played for Birmingham in the Premier Squash League last season, while Welsh Wizards would love to bring him home to Wales next next season.

Fellow Wales international Creed, the reigning Welsh champion who plays out of Rhiwbina SRC in Cardiff, says Wizards return to professional league squash has been a big success.

“The Wizards experience has been terrific,” said Creed. “There was a team at Newport SRC a few years ago and we pushed hard to keep that going.

“Greg Tippings ran the team and did a great job, but Wales have missed that level of team squash since that project ended, but now the Wizards are back.

“We finished third in our group last season, our first since rejoining PSL, and sell-out crowds underlined that Squash Wales are doing a stellar job.

“With Joel (Makin) and Tesni (Evans) both doing exceptional well on the World tour there is a massive buzz around squash in Wales.

“It’s a relatively small community, but everybody is together. The Wizards plus Welsh professional tournaments including the Rhiwbina SRC Open and Bangor women’s event have attracted loads of spectators.

“Squash is in a good place right now – and the key factors are to keep pushing forward and ensure more and more kids take up the sport and we help them make progress.”

The final word goes to Makin, saying: “Wales is getting a lot of support and squash is growing again.

“Our Commonwealth Games bronze medal success went out to a lot of people. The first Welsh Wizards’ Premier Squash League match sold out within a week. There is clearly a resurgence.”