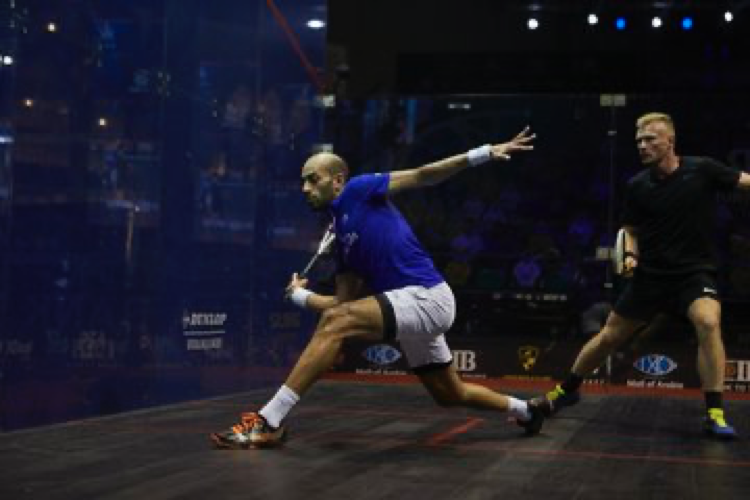 Joel Makin in action against Marwan ElShorbagy at the Mall of Arabia on Wednesday.

Joel Makin faces a Group decider at the CIB PSA World Tour finals in Cairo after losing his second match.

Seventh-seed Makin now faces New Zealand’s No 2 seed Paul Coll is his final Group B match at the Mall of Arabia on Thursday.

The winner will progress to the semi-finals.

And Coll plans on preparing for the match by finishing his binge-watch of the American Pie film series.

Coll won his first game of the tournament with a 2-0 victory over Tarek Momen, the Egyptian who beat him in the final of the World Championships.

“I watched the other three today, so I’ll watch the rest of that.

“It’s like a sauna out there, my shorts are dripping and there’s always sweat on the floor no matter how much you clean it.

“You saw in the first game that I got two lucky nicks, but that’s the way it is, I got the roll of the dice today and that’s all that matters.

“Hopefully they [Makin and ElShorbagy] will have battled it out.

“I’ve got a late one tomorrow night (Thursday), so I’ll have a long sleep in, prepare the same as I did today, enjoy it as much as possible and hopefully get the W tomorrow.”

ElShorbagy – who plays for Welsh Wizards – tops the group after following up his 2-0 victory over world No 5 Coll with his defeat of the British No 1.