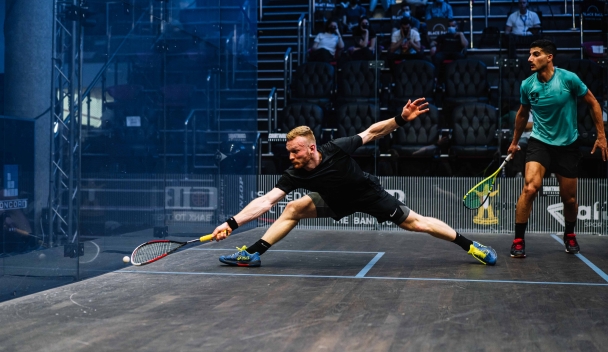 Joel Makin has booked a spot in the quarter-finals for the fourth successive time after seeing off Youssef Ibrahim at the El Gouna International in Egypt.

Makin came from 5-0 down in the first game to take it in a tie-break before comfortably setting up a quarter-final against Egypt’s Mohamed ElShorbagy or France’s Baptiste Masotti.

“I let him go out out when he was slotting his shots and he relaxed until he was 5-0 in the first game, but that’s pretty irrelevant,” said Wales’s World No 9 to psaworldtour.com.

“A lot of the guys do that. You have got to be tough mentally, 20 minutes of hard play and he didn’t want to know, just folded over and didn’t even try in the third game.

“So I enjoyed all of that. I love when they do that, that’s perfect for me, it was a hard 20 minutes and then, didn’t want to know.

“He is obviously skilful when he’s got threats in the middle, but a good squash, tight squash at the back, there is a skill to keep the ball tight to the wall, and keep him behind, and frustrated him, and that took 20 minutes.

“It might not look it at the start as far as being picked up 5-0 but once again, it’s pretty irrelevant for the outcome of the match.

“I just wanted to close him down, and use a good straight drop, and keep error free while attacking, so I was pretty happy with that.”