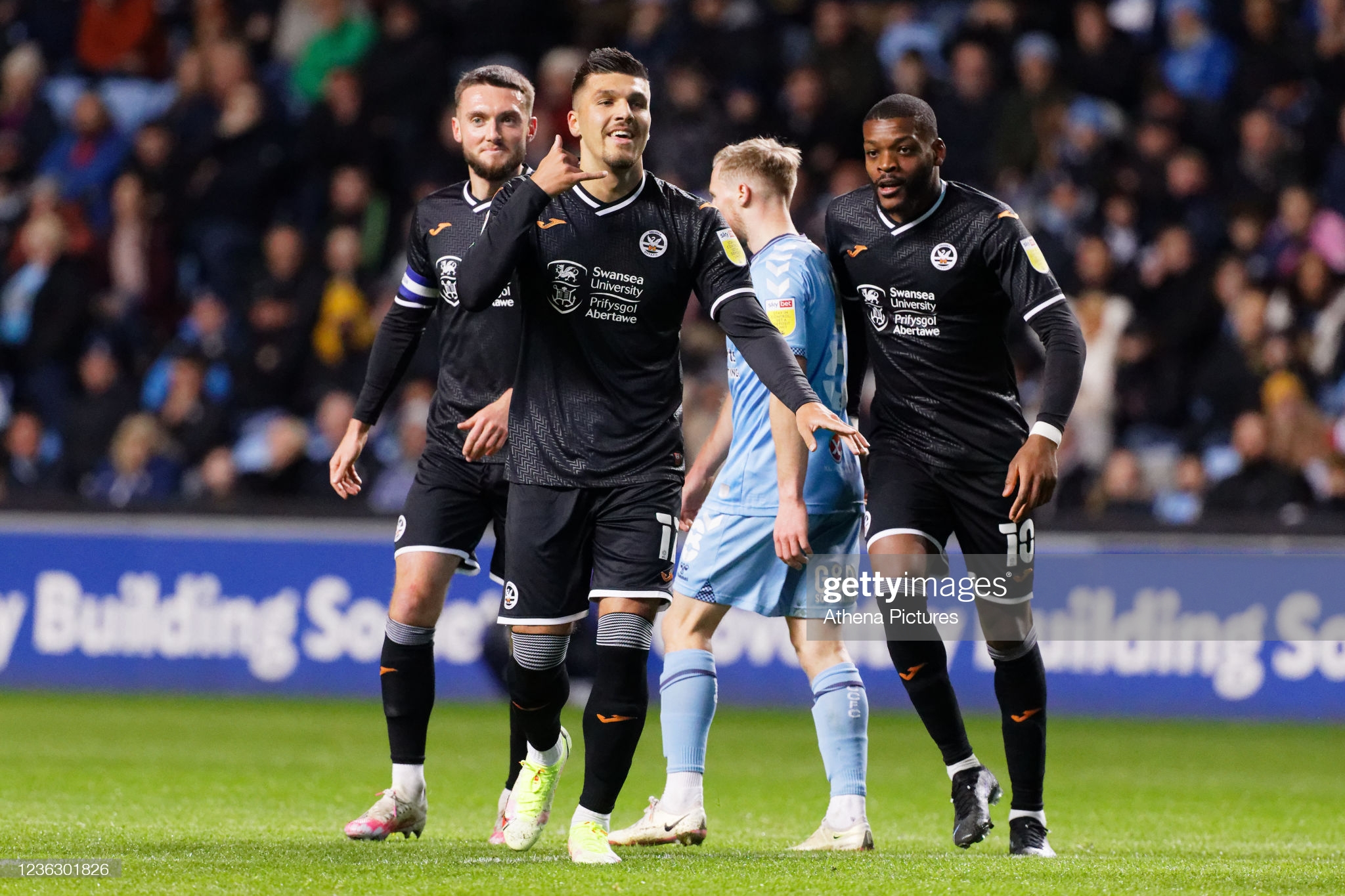 Joel Piroe may have scored nine Championship goals so far this season, but Swansea City head coach Russell Martin reckons he’s one of the club’s top defenders, too.

Piroe scored his fourth goal in five games on Tuesday night as the Swans moved into the top 10 thanks to a 2-1 victory at Coventry City.

It was the Dutch striker’s 10th of the season in all competitions and his nine in the league make him the fourth top scorer in the division after Aleksander Mitrovic of Fulham, Blackburn Rovers’ Ben Brererton and Dominic Solanke of Bournemouth.

But Martin reckons Piroe is having just as influential an impact of the Swans’ defensive record.

Since they crashed 3-1 at Fulham at the end of September, Russell’s side have lost once in six matches, won four and conceded just four goals.

“Forget all the goals, the defensive job Joel does for the team is really appreciated by his team-mates,” said Martin,

“He does some incredible things out of possession for us. He is so clever, links the game well, has good movement and is always in the right place which is why he scored the goal.

No Swansea player has scored more goals than Joël Piroe this season:

A bargain at £1m. 👀#Swans pic.twitter.com/LBslhUSw3n

“Jamie Paterson, you run out of superlatives to describe him. He just keeps getting better. He deserved a goal and took it brilliantly and he’s another one who works so hard for the team.

Paterson struck against his hometown club as Swansea handed Coventry their first home league defeat of the season.

The Swans found themselves 2-0 up inside a lightning 15 minutes through Paterson and Piroe before Kyle McFadzean’s header halved the deficit before the half-hour mark.

The 2-1 win was just the second time Martin’s side had won away this season and moved the team into the top half of the table for the first time this campaign, whilst the Sky Blues suffered a first league defeat at home since March 2019.

Martin added: “We came out the traps brilliantly. We had so much energy, intensity and aggression against a really good team.

“We showed so much courage to play the way we wanted to, there were some massive performances and I thought we deserved the win for the way we started the game and the chances we created.

“The set piece goal we conceded was disappointing but I thought we gained control back again in the second half and were really strong.”

Here’s the key moments from yesterday’s result against Swansea City at the CBS Arena. #PUSB pic.twitter.com/vRMzLmhA2x

The Swans are currently just a point off the play-off places in a congested table and only nine adrift of the automatic promotion places, although those gaps could increase after the matches on Wednesday night.

But skipper Matt Grimes believes the squad are now getting to grips with the methods and style Martin has imposed since he arrived at the start of the season.

“We had a slow start due to the gaffer coming in just before the start of the season, but we are really finding our feet,” said Grimes.

“You can see the clear identity we have and the way we are playing. We are enjoying it.

“Yes, we are one point off the play-offs but we’re not concentrating on talk of the top six. We are focusing on improving our performances.

“It’s a big win for us as they have not lost on home soil all season, while our away form has not been anything like our home results.

“So we know we will have to keep building on our away form.”

Coventry manager Mark Robins said: “We were architects of our own downfall. We didn’t start the game right, they are a good team and they want to move you around, they try and do things that we want to do to opposition teams.

“We gave them a brilliant head start in the game and they made us too uncomfortable because we didn’t get to grips with their movements.

“The second goal was two yards offside, it was our fault as well but we’ve got to work out when we press and when we don’t.

“We got ourselves back in the game with a header and then had opportunities, because however good these are they give you opportunities if you get after them.

“If we’d have got ourselves level at half time, we’d have gone on and won it, I’m sure of it. We’re fourth in the league, we’ve had a brilliant start and nobody is getting down about that.”