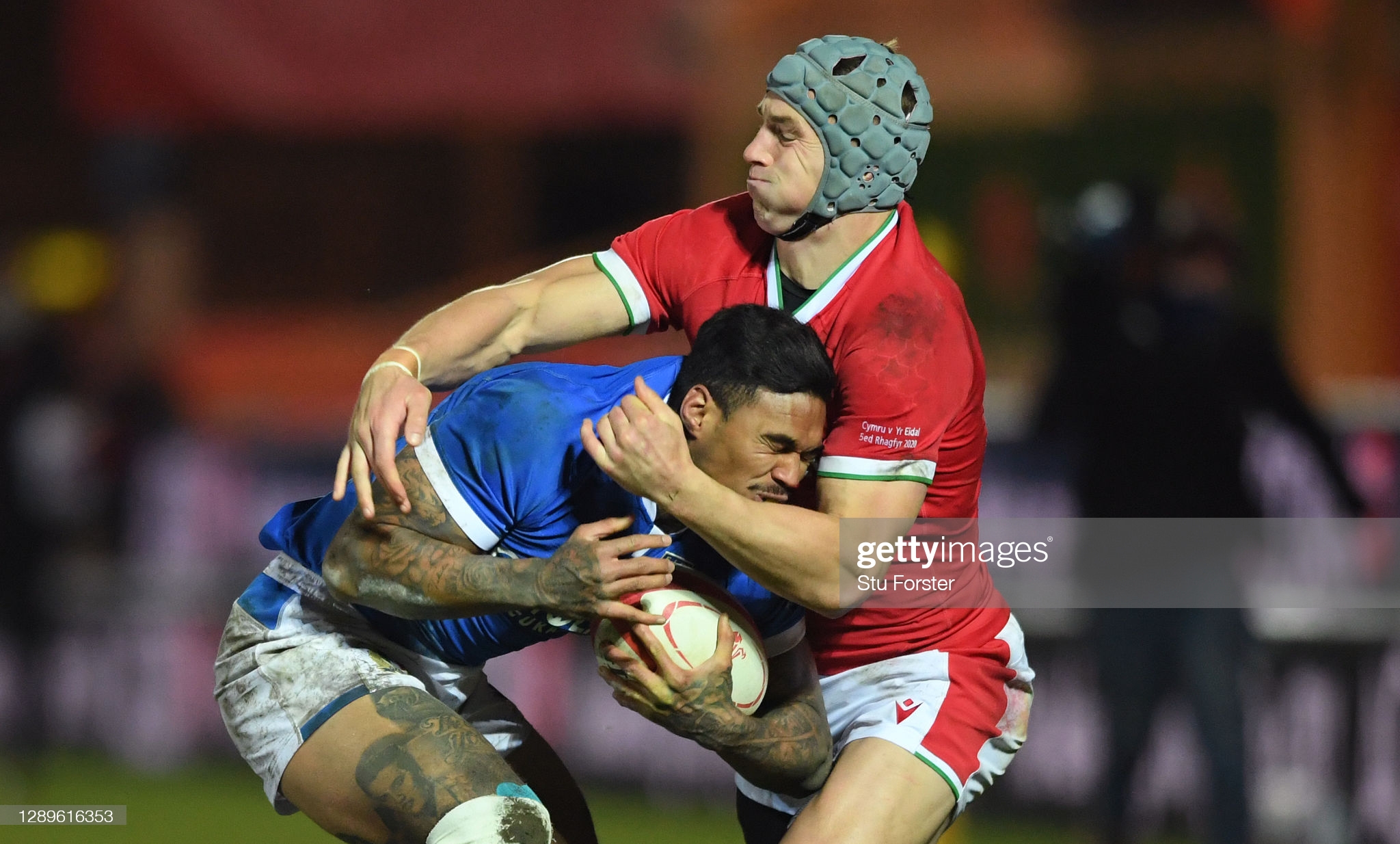 Jonathan Davies gets to grips with Italy. Pic: Getty Images.

Jonathan Davies believes Wales need to negate the threat posed by France at the breakdown when they meet at the Principality Stadium next Friday night.

France are on course for a Six Nations grand slam having already beaten Italy, Ireland, and Scotland, respectively. And test centurion Davies believes the breakdown is an area Wayne Pivac’s side must get right if they are to overcome Les Bleus.

“They are big heavy men, and for us, it’s making sure our speed to the breakdown is right, and that we don’t give them any opportunities to get over the ball,” said Davies. “I think when there’s separation with the carrier they are very quick to get their hands on the ball, and because they are such big men they are hard to move off it then.

“For us, it’s about making sure we don’t give them the pictures they want to see so then you negate the threat before it even happens.” Despite slipping to a narrow defeat at Twickenham last weekend Wales showed plenty of promise as they outscored England by three tries to one.

And Scarlets centre Davies insists there is plenty for Wales to build on ahead of facing France in Cardiff. “We want to play with tempo and at speed but with that you have to be accurate,” he said.

“I thought for periods of that second half when we had control of the ball it was pretty positive. We did some good stuff but inevitably it’s a results-based game, and we didn’t get the result in the end.

“When you break down the game and you look at areas we can improve on and keep building I think you can take some positives on how we played with the ball in the second half. Barring that try they scored they didn’t have many chances to score so that was good from our defence, but it’s all about winning.”

For the majority of his international career, Davies has been a permanent starter for Wales but has had to make do with a place on the replacements bench so far this championship. Naturally, Davies would prefer to be in the starting XV, but the 33-year-old is happy to do his bit for the greater good of the team.

“For me it’s new territory,” he said. “I would love to be playing more but it’s about doing whatever is best for the team.

“That’s helping the boys prepare for test match rugby. It’s all about getting results.

“I want to be involved as much as I can but at the moment this is my role, and I’ll do it to the best of my ability.”

“It’s high tempo, it’s ball in our hands, and the ball is the most important thing and that’s what we’ve always wanted to do since we were kids, no one wanted to really defend.

“It is good fun but it’s all about accuracy and winning games, we can’t go running up blind alleys we have to make sure that we execute what we need to do.

“It’s something that we’ve always wanted to have. The ability with the players we have on the ball is important and there is a lot that goes in to make sure that you can play like that.

“I think we had value on those fundamentals in the game on Saturday when we wanted to, but it’s making sure that we have that for the full 80 minutes.

“I can definitely see that we want to improve and play at that level and that tempo because it’s enjoyable for us and we feel that it can help us win games.”

France and Wales will have had almost two weeks to prepare for the match, which kicks off on Friday night at Principality Stadium, and Davies knows that the breakdown will be a key area if they want to play high tempo rugby.

“You’ve got to keep the ball for longer periods of time if you’re going to play with it more, if you don’t have correct numbers at the ruck, accuracy over the ball, cleaning out their threats you’re going to lose the ball,” he said.

“It’s sometimes the stuff that people don’t really want to do but if you value that it goes a long in helping you maintain the ball and keep the ball.

“It’s something that we spoke about, it’s the tasks that don’t really get the plaudits, that’s what we have to value for everyone else then to flourish.

“It’s about making sure when the game comes a week tomorrow, we’re not allowing them to have those pictures that they feel they can get their hands on the ball and slow it down. That’s probably our focus now in that area of the game.”