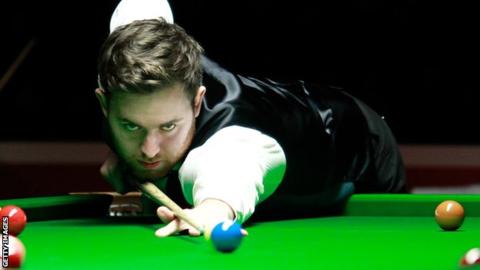 Cwmbran's Jak Jones is through to the Welsh Open last 32. Pic: Getty Images.

The Jones boys are flying the snooker flag for Wales at the Motorpoint Arena in Cardiff.

Reigning World champion Mark Williams crashed out of the ManBetX Welsh Open Championships, while fellow Welshmen Duane Jones and Jake Jones progressed into the third round.

There are now 32 players battling to progress from the initial 128.

Williams was the last player from Wales to win this the title, in 1999 and the world number two suffered an unexpected 4-2 defeat against Zhang Anda.

“I was rubbish,” said Williams. “He was by far the better player. He cues and scores well so I’m surprised he’s not higher up the rankings.”

The title defence rolls on…

Trump was fresh from his World Grand Prix triumph in Cheltenham, but he could not find the consistency needed in a patchy performance against his tenacious Welsh opponent.

Duane, ranked 68 places below Trump at 72nd in the World, said: “I didn’t feel nervous, I knew my game was in good shape, I just tried telling myself that.”

Cwmbran’s Jak Jones is also through to the last 32, beating Peter Lines 4-3.

Williams and Trump were joined on the casualty list by German Masters champion Kyren Wilson, who lost 4-3 against Joe O’Connor.

Anda sits 79 places below his victim in the world rankings #WelshOpen pic.twitter.com/2mZuuar1w9

Former champion Mark Selby was a 4-0 winner over Adam Duffy and Ronnie O’Sullivan swept through 4-2 against teenager Yuan Sijun.

“I don’t look into how I’m playing,” said O’Sullivan, who moved his career century tally to 993.

“One day is rubbish and I’m a bit more miserable, then the next day is better and I get more of a spring in my step.

“I’d like to win a couple of more matches here and see how it goes because it feels as if it’s coming pretty easy to me mentally and physically.

“Last week in Cheltenham I was so happy when I lost. I went to Sheffield for a few days, sat on my boat and did some practice.

“Yuan is a very good player which is great for the game if he can continue on the same trajectory. He has potential to be a World Champion and is going to be a huge star in China.

“It will be interesting to see how he handles that.”

From the ridiculous to the sublime.

Arguably the standout performance of day three saw Chinese star Zhao Xintong’s 4-0 victory against friend Zhou Yuelong. The success was built on breaks of 132, 103, 97, and 70.

“I like the challenge of playing against top players,” said Cahill. “I had a lot of luck, otherwise I wouldn’t have won.”