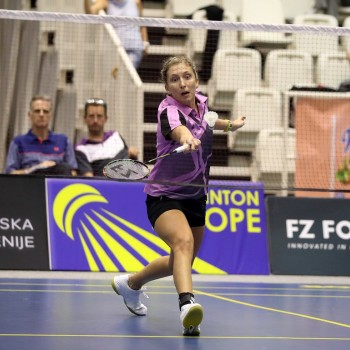 Jordan Hart has been playing for Wales since 2009.

Jordan Hart has reached the last 16 of the Saarlorlux Badminton Open in Germany.

The 25-year-old from Haverfordwest will face France’s Qi Xuefei in the last 16 after the No 5 seed beat countrywoman Yaelle Hoyaux 21-9, 21-12.

NEWS | Llongyfarchiadau i @jordanjanehart as she triumphs at the #SaarLorLuxOpen in Germany today! Jordan moves through to the next round with two confident wins under her belt 💪🏸 Keep up with the action here! https://t.co/kPT12fgZ1h pic.twitter.com/oJQw8peAgM

Hart made Welsh badminton history last month when she became the first woman to reach the second round of a BWF World Tour Super 750 singles event.

The Loughborough-based player beat Germany’s Miranda Wilson before losing to eventual winner Nozomi Okuhara in the round of 16 at the Odense Park.