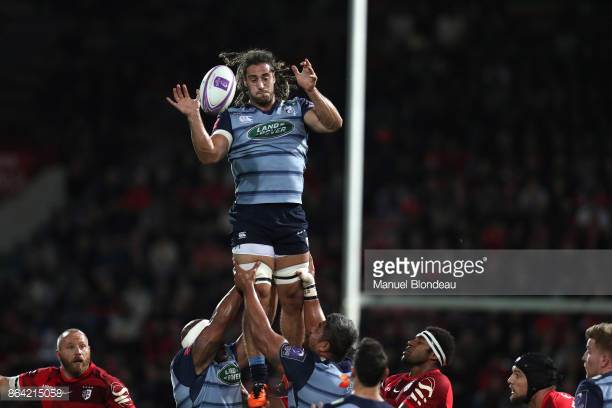 Navidi came off after only seven minutes in the 31-30 victory over Gloucester as he landed on the point of his right shoulder in a typically strong carry. Olly Robinson came on to replace him and picked up the Heineken Man of the Match award.

Outstanding for Wales throughout the 2017/18 season in the absence of Blues team mate Sam Warburton, Navidi is now likely to miss the three Tests against South Africa in Washington and two against the Pumas in Argentina next month. The Blues also lost rising wing star Owen Lane in the first half.

With British & Irish Lions star Justin Tipuric rested this summer, and Warburton still on mend after surgery, Warren Gatland will have to turn to another Blues back row star, Ellis Jenkins, and Scarlets’ James Davies to fill the No 7 jersey.

The last-gasp win at the San Mames stadium was the perfect send-off for Blues head coach Danny Wilson, who heads to Wasps this summer on the crest of a wave having also delivered Champions Cup rugby for the Welsh capital region for net season.

Ironically, he will join forces in Coventry with the man who last delivered some silverware for the Blues, Dai Young.

“Let’s hope we can get together and win the big one (Champions Cup) next season. I am really looking forward to getting to Wasps – it is time for a new experience,” said Wilson.

“They are a huge club with some quality rugby players. I hope I can learn a lot from Dai Young. I’ve served my time here and I believe in the three years my coaching team have left the Blues in a better place.”

Wilson told his players to tighten up their defence and attack from deep in the second half in Bilbao to try to overcome a 14 point interval deficit. They did just that and eventually won the game in the 78th minute with a wide-angled Gareth Anscombe penalty.

“I was very nervy watching Gareth Anscombe’s final kick after he had missed that one earlier on. But Gareth doesn’t miss two on the bounce,” said Anscombe.

“It was outstanding from him and he was quality. Twice he put us in position to score tries and get points – he is outstanding at full back or outside half.

“That second half represented everything that this group of players is about. We didn’t play our best rugby in the first half and we didn’t really fire a shot.

“But we came out in the second half and fired loads of shots both sides of the ball. We were much better. For this group to have that reward after this season is phenomenal. It is a great achievement and I am very proud of every one of them.”

One thought on “Josh Navidi Blow For Wales’ Tour Hopes”