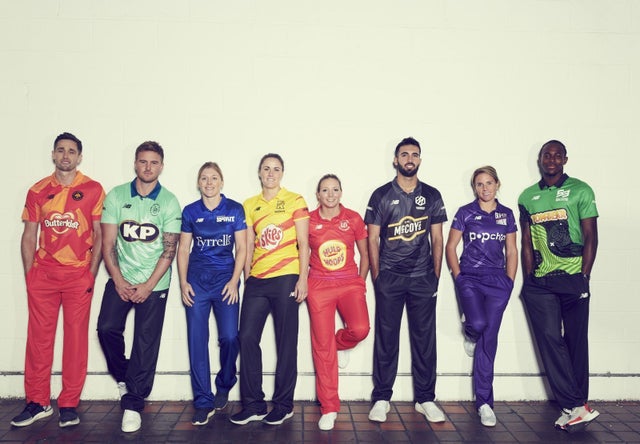 Katie George (fourth from right) will be part of the new Welsh Fire team in The Hundred.

Katie George is convinced The Hundred is going to shake-up cricket like a Joffra Archer bouncer.

The England international has already been named as the spark to ignite Welsh Fire, the new franchise which will be based in Cardiff when the radical 100-ball tournament starts next summer.

Together with Bryony Smith – and England World Cup hero Jonny Bairstow for the men’s Fire team – George has been selected for the Welsh side, while the remainder of the men’s teams’ allocation will be done this Sunday in a much-hyped televised draft.

The game’s governing body, the ECB, has had to overcome a good deal of scepticism and unease from traditionalists to even get to this stage, but they recently released the team names of the eight franchises who will compete in the new format of the sport.

George, the England all-rounder who plays in the women’s Superleague for Yorkshire Diamonds, can’t wait to get started.

“I’m really excited about it, the growth and the potential of the competition is more exciting that anything we have had before,” says George.

“With the men’s and women’s format being as one, it is a really big step in the game and the women’s game will definitely see the benefits of The Hundred.”

One of the main aspirations for the existing counties that have backed the tournament is to raise income levels coming into cricket by tapping into new, younger audiences who have so far been indifferent even to the T20 format.

George, who is only 20 herself but can already boast a hat-trick with the ball for England against India A in Mumbai last year, reckons the new competition will reach into a potentially huge market of female players and fans.

She adds: “I think The Hundred will improve female cricket, it will see more women and young girls who have never thought about cricket, now thinking, ‘actually, this is quite exciting!’

“I believe also the money being invested in female cricket will give up-and-coming players the option that they can actually become a professional cricketer. This will, hopefully, only inspire more young girls to get into cricket.”

The Hundred, What’s that?

Cricket fans around the world were left a little confused but also excited when the England and Wales Cricket Board finally revealed details of another format – The Hundred – earlier this year.

The Hundred is aiming to be a fast, fun, family-friendly format of cricket. It will aim to be one of the biggest competitions in world cricket and Welsh fans are fortunate that Cardiff held of competition from Taunton and Bristol to be the main hub.

So, what is the hundred?

The Fire could be bringing some huge stars to Cardiff – the likes of Chris Gayle and Steve Smith are in the mix – but nothing will be finalised on the men’s side until after Sunday evening’s draft.

The women’s teams are being centrally selected, rather than drafted in an auction as the men are.

This will be a massive opportunity to promote female cricket. The female game had more great news this week as the England and Wales cricket board announced it will be investing a huge £20m into female cricket.

The Hundred organisers are hoping to create a new cricket audience and the impact this tournament will have on the game is intended to be a very positive one. The money and investment in the female game in particular, could completely re-shape the sport.

The summer of 2020 will a huge year of change for cricket, but only time will tell if it proves successful.