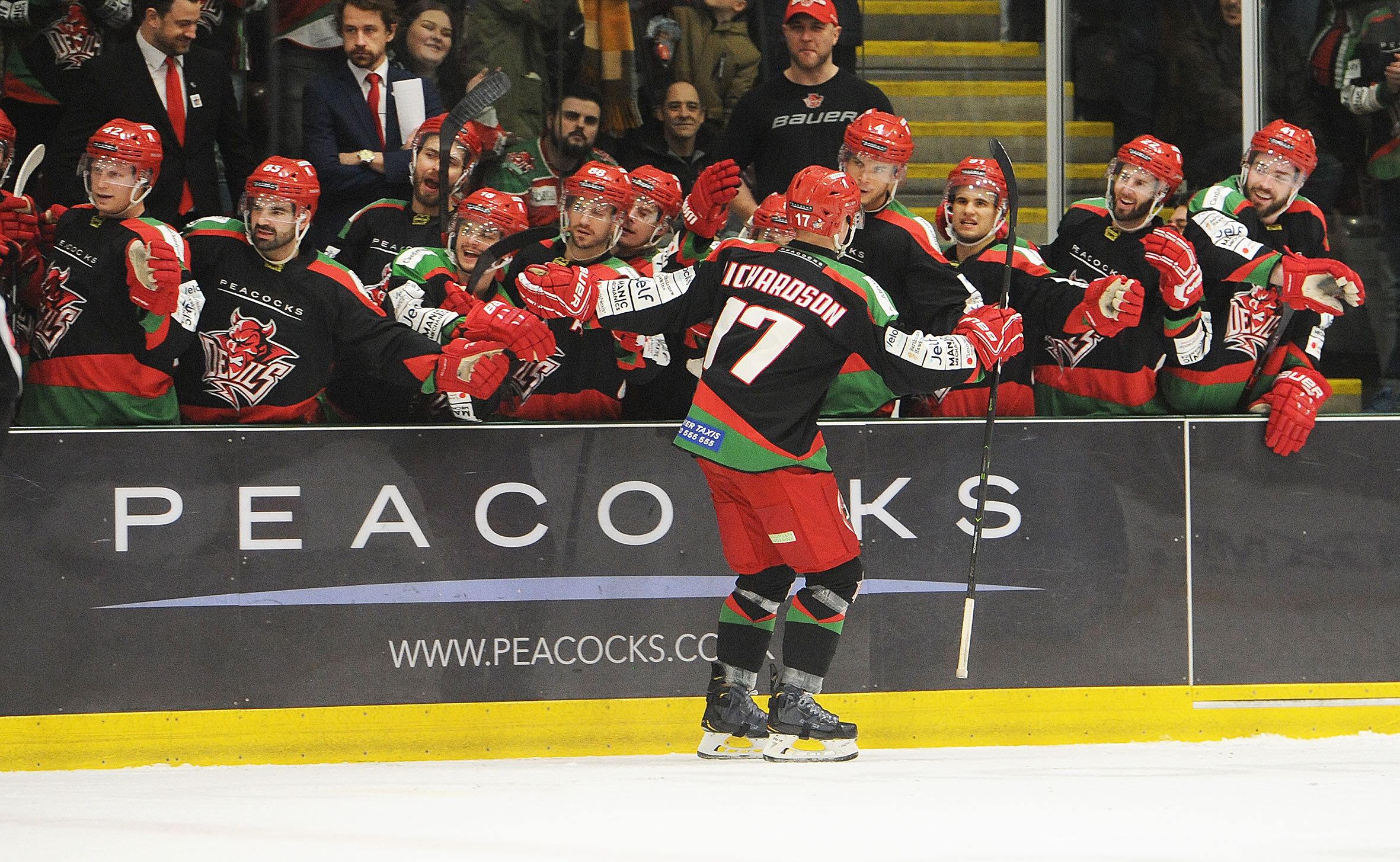 Mark Richardson made his 800th Elite League appearance - and honoured the occasion by scoring Cardiff Devils' first goal. He took congratulations from players on the bench. Pic: Richard Murray.

Both games attracted 3,000-plus sell-out attendances, the atmosphere was top notch and Devils fans young and old celebrated wildly after every goal.

“We looked a tired bunch and that has to be on me,” said the downbeat Keefe. “The players are not in shape.

“We were outworked by a championship team in Cardiff twice in two days.

“That was the case for at least 40 minutes in Sunday’s match alone.

“Our special teams were a plus, but 5 on 5 we had no answer. Devils know how to win big games and they proved it this weekend.”

Devils netted three goals in 71 seconds during a massive first period spell and although Giants hit back with two powerplay goals, the home team produced their best 20 minutes of the weekend in the final period.

“Devils fans were the best they have been all season,” said Devils coach Andrew Lord. “That’s massive and helps the team so much.

“They have been fantastic throughout, but this weekend the atmosphere was taken to a new level.

“That minute and a half flurry in the first was terrific and showed off some of the skill sets our players have. There were some great goals.

“We competed hard and played like a team. Every player came to the party and contributed in different ways.

“When we play like that it is extremely effective. Two wins, a big weekend, but still only two wins.”

The hugely impressive Matthew Myers was at his best over the two games, going into the dirty areas and using his strength to battle for the puck.

He has a 100 per cent success rate in face-offs (11/0) in the first game and Lord said: “Myersy was unbelievable.

“That was one of the best games I’ve seen from him, hitting everything and moving his feet quickly.

“He brought that same desire on Sunday and shone in what were outstanding team performances.”

Mark Richardson made his 800th Elite League appearance (all competitions) on Sunday and marked the occasion by scoring the first goal and being named man of the match.

Devils stand nine points clear of second-placed Giants in the League table and could extend that with a win against Sheffield Steelers away on Wednesday.

The next fixture for Giants is against Fife Flyers at home on Friday, the first of three matches in three days. Belfast face Fife in Northern Ireland on Friday and Saturday before making the trip to MK Lightning on Sunday.

Devils have four successive away games now, starting in Sheffield and followed by Nottingham Panthers, Fife Flyers and Manchester Storm.