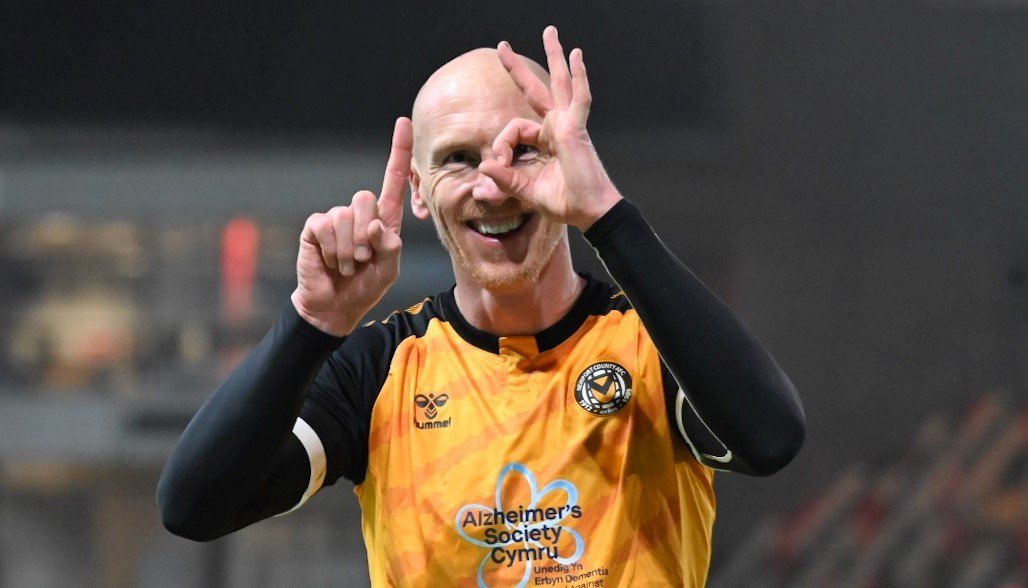 Kevin Ellison enjoyed his maiden Newport County goal probably just as much as the ribbing he gave boss Michael Flynn after.

The ageless (well 41) midfielder netted the winner deep into stoppage time just minutes after coming off the bench against 10-man Port Vale.

The win left County the Exiles three points clear at the top of League Two – and Ellison jokingly telling Flynn there would be even more to come if he had more playing time.

“I said to him ‘you’ve given me six minutes, but imagine what I could do if you gave me a bit more!’, said Ellison.

“Hopefully this goal will help me kick on and hopefully I’ll get seven minutes next week!”

Ellison may get his wish for more playing time given the busy period with Walsall the visitors to Rodney Parade in midweek before a home game against Salford in the FA Cup 2nd Round.

“I knew that if an opportunity fell for Kev that he would score, and that’s what he did,” said Flynn, who avoided the dreaded Manger of the Month curse as County finally saw off a Port Vale side down to 10-man after the dismissal of Leon Legge.

“He is a fantastic professional and a great human being.”

Flynn, who signed his pal from Morecambe in the summer, added: “He won’t shut up about it now. ,

Buzzing to get my 1st sausage roll ⚽️ for the club ⚫️🟠 but more importantly another 3 points on the board #OneClubOneCounty https://t.co/SN7MTx9qF8

“He’s already spouted off. As soon as he scored, he said imagine how many he’d get if he was given more than six minutes!

“I know what I am getting from Kev and he’s a brilliant option to have. If that was to fall to anyone, I wanted it to be him, because I knew that he would score.

“Kev is a character but a fantastic professional, that’s why he is still playing at that age.

“He has had some tough times but has come through and is always there to help others.

“This year we are creating chance after chance. I don’t care really whether we score in the first minute or the last – it’s three points at the end of the day.”