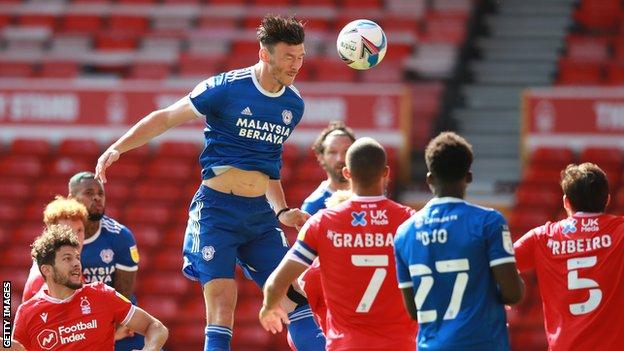 Kieffer Moore will be hoping arrival of Harry Wilson will see him off to his Cardiff goal tally. Pic: Gettys Images

Kieffer Moore insisted there are plenty more goals to come after his double earned Cardiff City their first win of the season at Nottingham Forest.

The £2million summer signing from Wigan’s first-half double were his first for the Bluebirds.

But the striker – who has netted three times in six appearances for Wales- says there are more to come in the Championship this season.

“Confidence is everything in this game,” said Moore. I know I can score goals, especially in this team as they’ll keep making chances for me.

“I’m going to keep going, get my head down and get as many goals as I can.

“The lads did brilliant to get to the play-offs last season and we want to do even better this season.”

Moore bagged his first goal for the club after just three minutes with a towering header from a Marlon Pack corner.

And Moore doubled the lead five minutes before the interval when he stabbed home from close range from skipper Sean Morrison’s flick.

If Moore carries on scoring at this rate then his £2millionfee from Wigan in the summer will look like a steal.

He added: “I’m delighted with the three points and the goals. We stuck it out as they made it difficult for us second-half.

“They made it a tough game for us. Games are going to be like that where we have to see it out.

“I always try and lose my marker in the box. Thankfully I took him one way and went the other so it worked for me this time and I had a free header.

“It was great to get that chance and I was happy to score it.”

City had some nervy moments in the second-half as the home side desperately tried to get back into the game.

But the Bluebirds held on to claim a much-needed first win of the season after last week’s home defeat by Sheffield Wednesday in their Championship owner.

It was their sixth successive win at Forest.

Joe Bennett, in his 150th appearance, limped off with manager Neil Harris saying it was a calf strain.

Josh Murphy was an absentee with a hamstring injury but he could return next week.