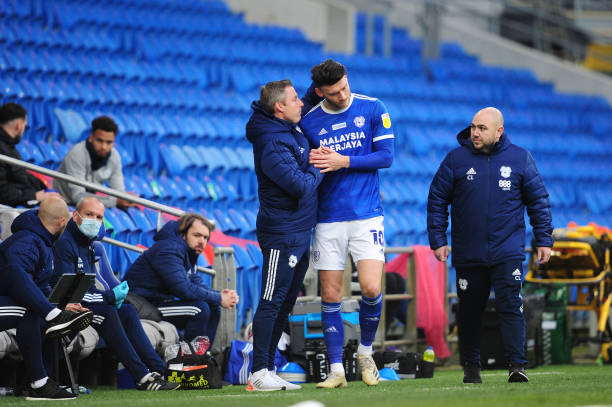 Kieffer Moore one of the players brought in by Neil Harris who could also prove crucial to Mick McCarthy. Pic: Athena Pictures/Getty Images)

Kieffer Moore has dealt Cardiff City a major blow after being ruled out until the New Year with a torn hamstring.

The striker – who has netted eight goals for the Bluebirds since his summer move from Wigan – suffered the injury in the derby defeat to Swansea City after attempting to score with a back-heel.

“Kieffer will be out for a period of time,” said Harris. “He has got a hamstring strain from the effort on goal.

“At first I thought it might have been a cramp in the hamstring and just disappointment he didn’t score.

“He has had a scan and has got a tear in his hamstring and will be out until the New Year.

“He has been in great form this season.

“Most recently, as well, he has been pivotal to the four-game winning run we had.

Moore looks set to miss at least five games ruling him out of the busy Christmas and New Year schedule as City look to regain the momentum lost from the 2-0 defeat by the Swans.

But it could mean a chance for Glatzel to impress having looked to have rediscovered some form and confidence in front of goal in recent games coming on as a sub.

The £5.5million German striker netted in the wins over Huddersfield Town and Stoke City during City’s four-match winning streak.

“As always, it becomes an opportunity for someone else, like Robert Glatzel for example who has been waiting in the wings and he has made an impact when he has come off the bench in the past few weeks,” added Harris.

“If the opportunity comes his way I am sure he will be delighted to get it.”

“Bobby will be the first to admit, he interviewed after Huddersfield and said he loves it here but he has not quite hit the levels he wanted to hit,” he added.

“When he talks about that… Robert is a goalscorer, he wants to score a goal every week and if he doesn’t score a goal then he is gutted he hasn’t scored.

“To me, there is a lot more to a player than just scoring goals.

“Robert has been honest enough to say that he has still not hit the levels on the consistent run that he wants to and now possibly, depending on team selection, that opportunity comes for him.

“He has not got extra pressure on his shoulders, he has just got to go out and play and enjoy himself. We all appreciate that there’s more to come from Robert Glatzel and let’s hope we see more.”

Junior Hoillett could make a re-appearance after missing two games with a hip flexor muscle injury, but Harris faces a re-think on his shape and style tonight with Moore and suspended Joe Ralls out of the equation.

“We will have to find different ways, and new dimensions, to play without Kieffer and Joe. The key thing is we have to bounce back from last weekend’s defeat,” said Harris.

“The defeat to Swansea won’t be forgotten, but we have to move on. We were outstanding in the four games before last weekend and we have to respond in the right manner.

“The players are pretty robotic in their approach to all these games in this period and I expect us to come out fighting again.”