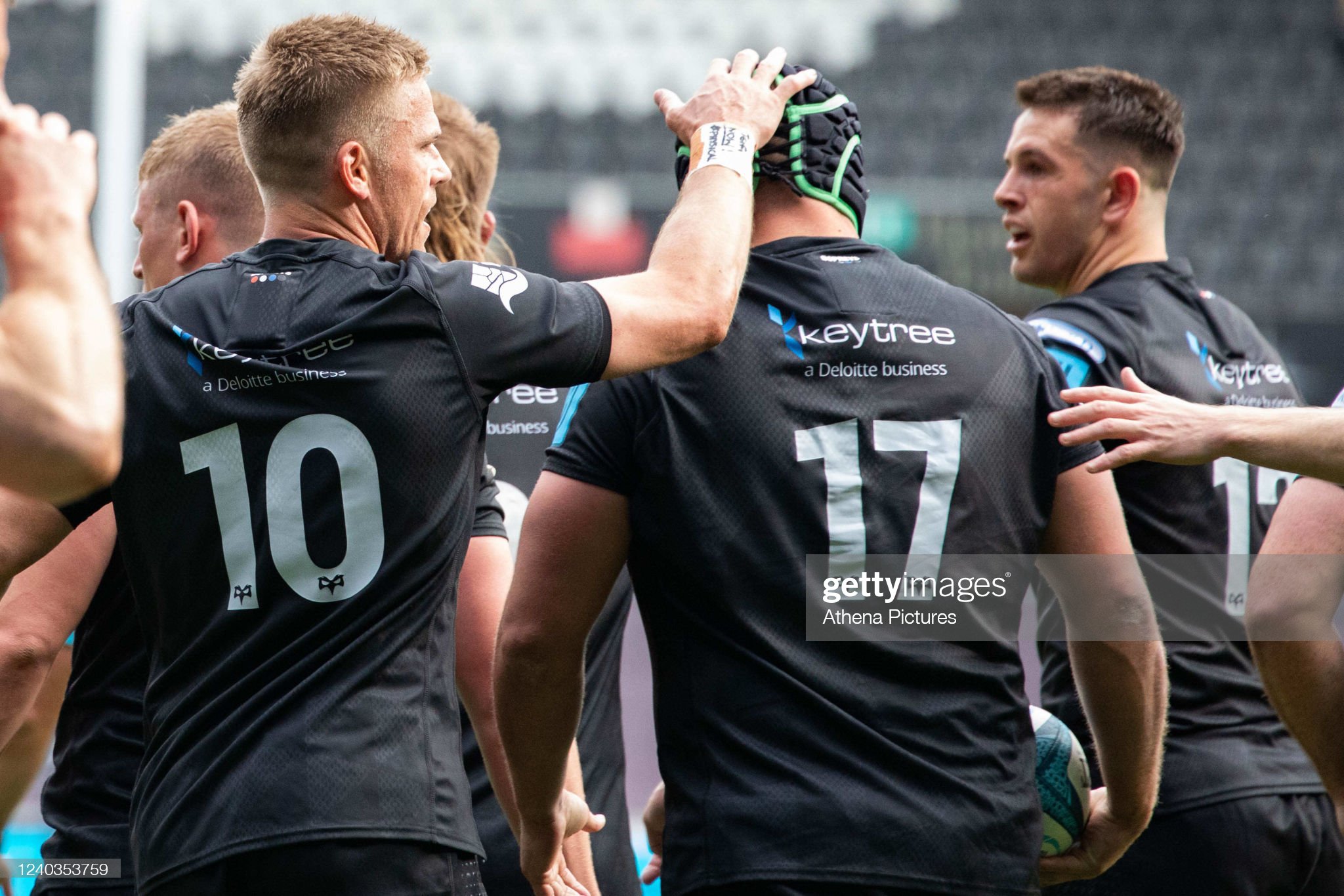 Gareth Anscombe and George North have earned praise from Ospreys head coach Toby Booth after their part in thrashing the Scarlets, 54-36.

The Wales pair – who were both on different stages of the comeback road after long periods out injured – helped their side to a victory which keeps alive their Heineken Champions Cup qualification hopes.

Anscombe proved he is approaching his best again after two years out with a knee injury, while North played his first match for a year following his own knee problem.

“Gareth Anscombe is a great example. I said previously that he needed time and we’re starting to see a true reflection of him as a player.

“We could keep going. Those boys that have been absent for a year plus, for us, are big players.

How good was it to see this guy back in action today! @George_North 🙌 pic.twitter.com/Sa1gJjvG2R

“You can’t hide away from that. It provides opportunity for your other players to get valuable miles on the clock but ultimately there’s a reason that they’ve played 150 first-class games, 150 Test matches. They are what they are.

“It’s great when you’re trying to grow a group of players into being something.”

Ryan Conbeer scored a hat-trick of tries for the visitors with Gareth Davies, and Kieran Hardy also touching down.

The Ospreys are now four points behind the Scarlets with a game in hand, with the winners of the Welsh Shield qualifying for next season’s Champions Cup.

The Scarlets lead the Ospreys – who have a game in hand at home to the Dragons next week – by five points.

Both sides host South African opposition in the final round of the campaign with the DHL Stormers the visitors to Parc y Scarlets on May 21 and the Vodacom Bulls playing in Swansea the night before.

Scarlets head coach Dwayne Peel said: “We want to finish the season well. We have to dust ourselves down.

“The boys have had nine weeks back-to-back so we will have some time off this week which is needed and then we will hit the two weeks into the Stormers game with everything we have got so we can finish well in front of our fans.”

Booth’s side drew first blood when Anscombe sent Alex Cuthbert through a hole. Cuthbert was brought down, but the ball was recycled with Nicky Smith powering over from short-range for a try which Anscombe converted.

But the Scarlets hit back with a well-crafted try of their own. Sam Costelow was playing so flat he sent dynamic Argentinian openside Tomas Lezana charging towards the Ospreys 22. Lezana found Davies on his shoulder who touched down for the try.

The Scarlets were full of confidence and when the ball found its way into Ryan Conbeer’s hands he brushed aside Mat Protheroe with ease before running in unopposed from 45 metres out. Costelow converted from the touchline, but the Ospreys hit back when Giles raced up the touchline.

The wing was brought down, but the Ospreys had enough momentum to exploit the Scarlets defence with No 8 Morgan Morris showing his power to force his way over the line. A well-timed pass from Costelow put Conbeer over for an easy finish meaning the Scarlets held a 24-14 lead at the interval.

Today was the most points the Ospreys have scored since 2016, and against a team we haven’t beaten since 2019. Ecstatic doesn’t cover it. https://t.co/08apl5WGDM

The Ospreys came out of the blocks firing in the second-half, with Anscombe slicing through the visiting defence. Scarlets were at sixes and sevens in defence with Anscombe’s pass sending Giles over for a try.

This was end to end stuff with the Scarlets temporarily reduced to 14 men when wing Corey Baldwin got sent to the sin bin for intentionally slapping the ball down as Giles attempted to offload after another electric break.

The Ospreys made the most of their numerical advantage with Lake scoring two tries in the space of five minutes courtesy of the Ospreys’ driving lineout. Giles sparked the Ospreys’ next try with a sensational 75-metre break before finding Collins for the try.

Watkin was next on the scoreboard as he charged over from short-range, before Hardy claimed one back for the Scarlets.

Conbeer showed his strength to brush off three defenders for his hat-trick before Sam Parry sealed the victory for the Ospreys with their eighth try.