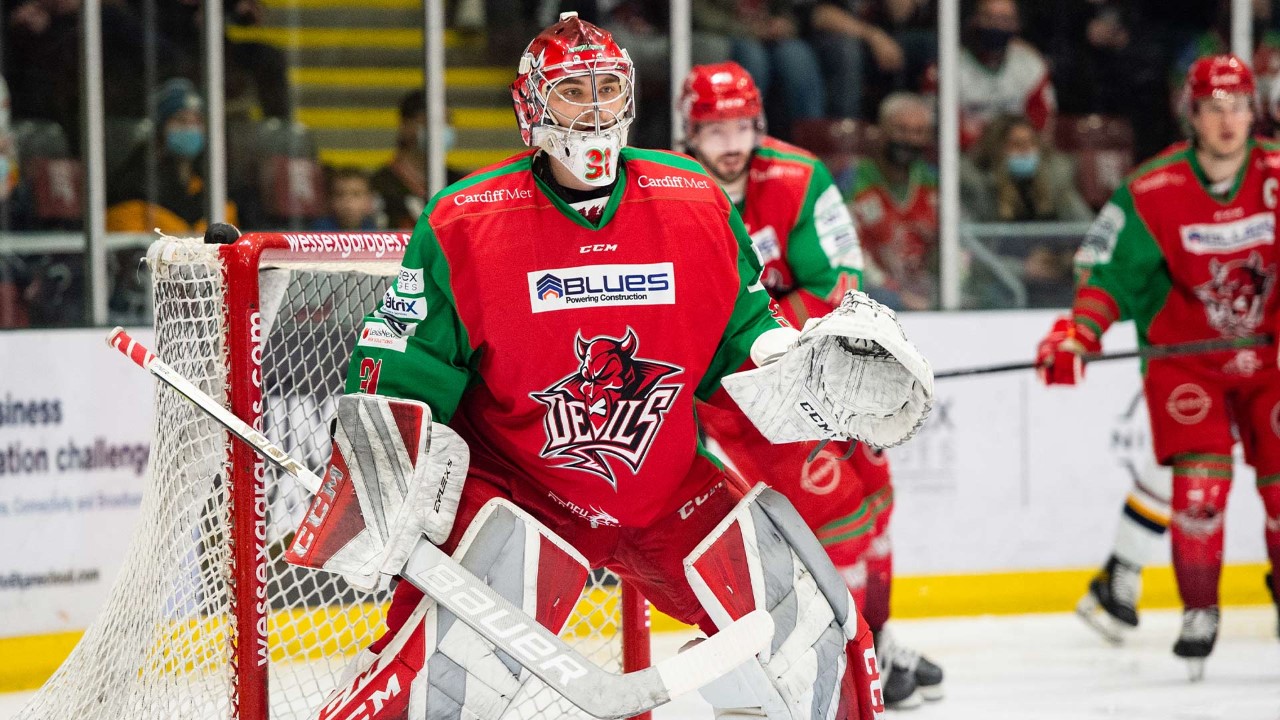 Goaltender Taran Kozun could be handed his first start of the season as the Cardiff Devils switch their focus to the Challenge Cup this weekend.

The Devils have been runners-up in the competition for the last two seasons and will be keen to make a strong start to this season’s campaign when they host Guildford Flames at Ice Arena Wales tonight (7pm).

Brodie Dupont’s new-look team were quick out of the blocks last weekend recording back-to-back wins at the expense of rivals Sheffield Steelers and Manchester Storm, who they fired eight past in a clinical offensive display on their home opener.

Devils duo Trevor Cox and Ben Davies are the early point-leaders in the Elite League, having banked five and four assists respectively.

And coach Brodie Dupont was rewarded for his decision to start Ben Bowns in net on both nights with the Team GB goalie stopping 55 of the 57 shots he faced across the two games.

But despite Bowns’ encouraging start, the Challenge Cup could be the ideal opportunity for Dupont to make the switch and keep Kozun sharp in what would be the Canadian’s first competitive game of the season.

Speaking last weekend, Dupont revealed his two goalies have been pushing each other hard in training to help bring the best out of each other.

“We have two really good goaltenders, so that’s a benefit,” he said. “They’ve been battling in practice.

“The plan was always to start Bowns on opening night and then it was going to be on a game-by-game basis.

“You saw the way he played in Sheffield, so we felt we needed to go back to him.

“The goaltenders have a good relationship, we’re constantly in communication and we made a call to let him go back-to-back and obviously, he played very well in both games.”

Kozun put up good numbers in the Challenge Cup last season with a 5-2 win-loss record which included a 35-save shut-out over Guildford that helped maintain an impressive 94.36 save percentage.

Star centre Joey Martin could return to the Devils line-up this weekend after he was withdrawn from last Sunday’s game against Manchester, while defenceman Mark Louis was due to be reassessed after sustaining a knock in Sheffield.

Meanwhile, Cole Sanford has retrospectively been denied one of the three goals he netted against Manchester. The video replay showed that Jake Coughler’s skate made the decisive contact on one of his goals, so Sanford’s record was adjusted to two goals.

Guildford make the trip to Cardiff Bay in search of their first win of the season. Flames were dealt an early set-back suffering a 4-3 overtime defeat to Nottingham before losing 4-1 on home ice to Sheffield the following night.