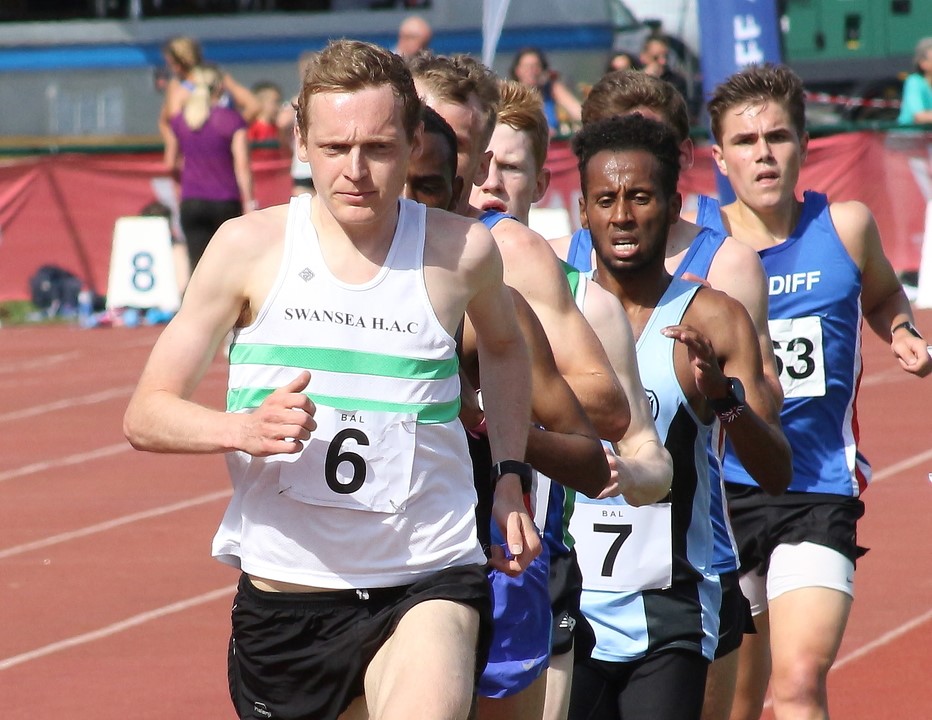 Kris Jones has excelled on track as well as cross country and orienteering. Pic: Owen Morgan.

Jones clocked 13:45.25 as he won the A race at the British Milers Club meeting at Loughborough on Saturday evening.

The 27-year old just managed to hold off the challenge of Norway’s Per Svela and Portugal’s Rui Pinto in a thrilling finish.

Jones, who is based in Dundee, has been in excellent form this season having already won the Forfar Half Marathon, The Scottish National 10k Cross Country Championships and the Great Edinburgh 8k International earlier this year.

A Great Britain orienteering international, Jones won a bronze medal at the European Orienteering Championships in May.

His time in Loughborough gained the hugely versatile Jones a place amongst the all-time top 20 Welsh 5,000m performances.

Afterwards Jones tweeted: “Well that went better than expected! The aim was sub-14 but my legs just felt good the whole way.”

There were further personal bests from a strong Welsh contingent at Loughborough, including Wrexham’s Matt Willis, who clocked 14:24.62 in the 5,000m B race.

Swansea Harrier Cari Hughes lowered her best ever time in the 1500m to 4:17.95 – knocking almost six seconds off her previous PB which she achieved when winning the British University’s Championships in May.

There were also notable performances in the 800 metre races.

Amman Valley Harrier Jade Williams, who has spent the past year battling back from injury and illness, clocked her best 800m time since 2015 when she ran 2:07.08 in finishing third in the B race.

This coming just a couple of weeks after the former Welsh 800m champion clocked 4:17.28 at the BMC’s Gold Standard Races at Watford, finishing second in the 1500 metres. This, again, was her fastest time since 2015 when she clocked 4:15.63 at the same meeting.

On the same evening out in Belgium, Lucy Evans, was rewarded with a season’s best in the 100ms at the Lotto de Nivelles meeting.

There was disappointment, at the same meeting for Lauren Williams, who was chasing a World Junior Championships qualifying time in the 400m hurdles.

The Swansea Harrier finished fourth in 60.61 seconds – outside the qualifying mark of 58.50.

One Welsh athlete who has already gained the qualifying standards for the Junior Championships in Finland is James Tomlinson.

The Pembrokeshire Harrier was representing Great Britain Juniors at the Bauhaus Junioren Gala in Mannheim, Germany, on Saturday, where he finished seventh in the men’s discus with 55.04m.