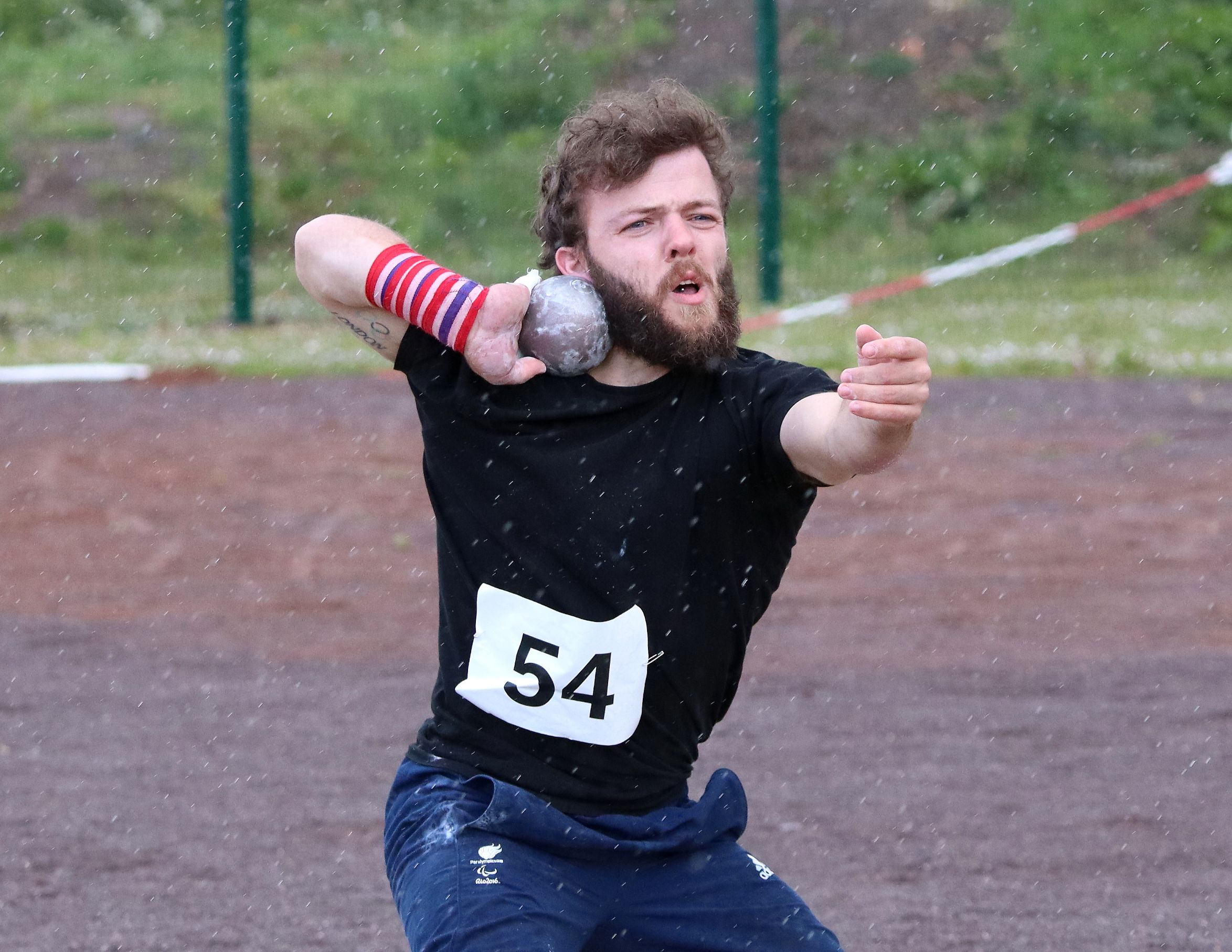 Kyron Duke in action during this week's event in a cold and rainy Cardiff. Pic: Owen Morgan

While some may have been eyeing the central heating controls on what seemed like one of the coldest May evenings in living memory, Kyron Duke was delighted to be competing in the driving, icy rain in Cardiff.

To be fair, he wasn’t alone. There was a strong turnout for this week’s Run With the Wind event with athletes of all disciplines raring to go after the disruptions of the past year.

Despite the meeting’s title, there was also a shot put competition included in the programme, which gave Duke a much welcomed opportunity to return to action.

The F41 shot putter had competed only once since winning a bronze medal at the 2019 World Para Athletics Championships in Dubai.

Conditions couldn’t have contrasted more from the United Arab Emirates, but Duke said afterwards: “The circle was quite wet, it was raining the whole competition but it was okay.

“Technically it was alright. This was the first comp in almost two years now obviously with everything that’s been going on. It could have been better, but the coach is happy and I’m sort of happy.”

Although some distance off his PB of 14.53m achieved just over two years ago, Duke is confident things are moving in the right direction after such a long lay-off.

The next major step will be representing Great Britain at the World Para Athletics European Championships in Poland early next month, with the Tokyo Paralympics the ultimate goal in August.

Commenting on his selection for the Europeans in Bydgoszcz, Duke said: “I’m super excited, it will be good to get a European comp abroad again after two years almost. So yeah, looking forward to it.

“Getting back into the competition environment again – going through the steps like the call room and classification and stuff. And then going through the run up of everyone taking their turn to throw and all that. It’s a good practical run through.”

The 28-year-old is aiming to add to his tally in Poland and Japan: “Definitely! Everyone is aren’t they? Always!

“I’m pretty confident. You know, I’ve just got to build up and get the comps back under my belt and get back into the routine.

“It’s been two years as said before, but yeah, it’d be good to get into the routine again and everything will start clicking back as it was.”

Aiding that return to form is the fact training is back to something approaching normality following the various lockdowns experienced over the past year.

Duke says: “At first it was quite hard, where we’d borrow weights and stuff from our local gyms or from the performance gyms.

“But now they’ve got a really good set up going where we have all our training bubbles, and set times to train.

“Everything’s all clean, and set out before and every training session. So everything’s getting back to near enough normality of training.”

Wednesday night’s competition was won by Newport’s Daniel Cork with a best effort of 16.85m, ahead of Birchfield Harrier Gareth Winter with 16.48m

Another Welsh international and Birchfield Harrier, Adele Nicoll, was third in the mixed competition with a distance of 15.56m.

There were new personal bests for Swansea Harrier Jodi Beynon and Amelia Fettis, of Newport, who registered 10.99 and 10.45 respectively.

Full results from the Run With the Wind event can be found on the Welsh Athletics website.