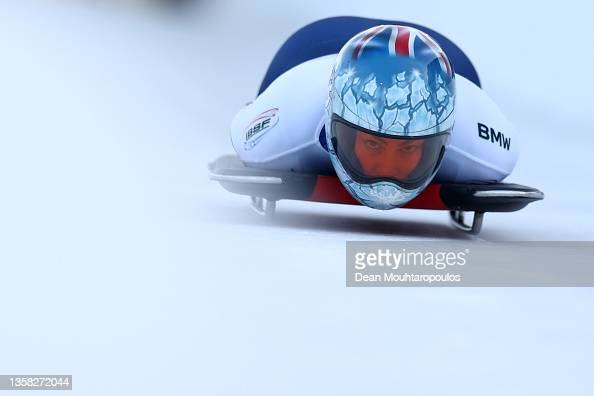 Laura Deas will go for gold next month when the Welsh Olympian returns to the Games, this time being held in Beijing. She may be a specialist in skeleton – one of the most technically demanding of winter sports – but as she tells Lucy Rees, her foundation as an athlete was built around a wide variety of different sports.

Laura Deas believes Winter Olympic athletes are made, rather than born – at least when it comes to a country like Wales.

The North Walian became the first Welsh woman to win a Winter Olympic medal when she took bronze in the skeleton at the 2018 Games in Pyeongchang in South Korea.

In doing so, Deas put Wales on the map when it comes to winter sports, sliding her way into the same elite space on Olympic podiums occupied by the likes of Jade Jones, Lauren Price and Nicole Cooke.

Unlike taekwondo, boxing or cycling, though, it’s difficult to find anywhere in Wales you might be able to hone your skills all-year-round as a budding young sledger.

But Deas has a message to anyone inspired by her when she returns to the Winter Olympics stage in February in Beijing: There’s no need to rush.

The 33-year-old was not flying down an ice-packed run as a teenager in Wrexham and believes the most important thing for youngsters is to hone transferable skills through a multisport approach.

“I didn’t find skeleton until I was almost 20,” says Deas.

“I think now, with modern sports science, this idea of talent transfer is becoming more and more prevalent.

“So, I think, as a youngster, if you’re not sure if you have found your sport yet, or you’re participating in multiple sports, that certainly isn’t a bad thing.

“I competed in lots of different sports as I was growing up. I didn’t find the thing that I was really good at until I was out of my teens.

“I think it’s important to enjoy what you do as well as work hard at it. I was never pushed so hard as a youngster that I stopped enjoying sport.

“That’s really important. If you’re a young athlete, and if you’re interested in a particular sport, and it’s not one that you currently do, it’s a good idea to get in touch with that sport.

“Keep an eye out for when there might be talent ID days and stay across those opportunities.

“But overall, it’s enjoyment that is the key. You have to try something and find you like it.”

Deas played hockey and was a horse rider in her younger days until she herself was spotted in 2009 at a talent identification programme.

Likewise, Wales’ Mica Moore was a sprinter before she tried her hand at bobsleigh and went on to become a junior world champion in 2017, along with Mica McNeill, before the pair finished eighth at the Winter Olympics in Pyeongchang.

It was the same process more recently taken by Beth Munro, the Paralympic silver medalist plucked by Disability Sport Wales when they were panning for gold.

Munro, a netballer and javelin thrower at the time, moved to Cardiff to take up taekwondo and came within a whisker of becoming a Paralympic champion in Tokyo earlier this year, before settling for a silver medal.

Wales has no recognised sled runs for skeleton, luge or bobsleigh, although there is a specially designed push track at Bath University.

Home to British Bobsleigh and Skeleton, it’s where Deas is based for training when she is not travelling around the world, competing. The centre runs a series of spring and summer taster sessions in the sport.

Final World Cup before @Beijing2022 here in the stunning St Moritz- one of my favourite places in the world pic.twitter.com/jr093ScPSK

You can find out more by contacting British Bobsleigh at office@thebbsa.co.uk.

Other winter sports, such as skiing and snowboarding, are available to try at centres around Wales, with artificial slopes at Cardiff, Pontypool, Llandudno, Llangrannog, Pembrey and Dan-Yr-Ogof.

Snowsport Cymru Wales is the governing body for skiing and snowboarding in Wales, overseeing clubs throughout the country and promoting participation. Their website can be found at: snowsportwales.com

It’s now over a decade since Deas took her first steps towards becoming a Winter Olympian by signing up for that “Girls4Gold” talent identification programme.

That is something she regards as a launch pad towards her own success and she adds: “It’s great to see that it’s still going strong.

“I think it’s easy sometimes, when you’re embarking on something, and you’re, essentially, becoming a beginner at something, again, to lose motivation and confidence.

“For the first couple of years, it’s hard. It’s really hard. I had to learn how to lift weights in the gym, let alone the actual slide down the mountain bit!

“And constantly, you’re cold and you’re hitting walls! You’re wondering, ‘why on earth did I do this?’

“But if you have the confidence to feel it will be worth it because you are enjoying it and you know, there are massive opportunities at the end of it. So, just keep going.”

The Winter Olympics takes place in Beijing, China between February 4-20.