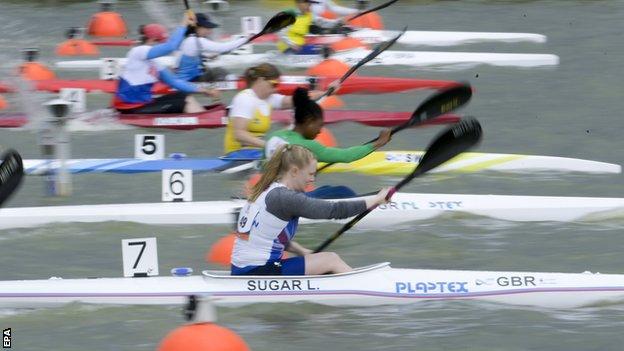 Laura Sugar is looking to compete at a second Paralympics, having switched from athletics to canoeing.

Laura Sugar powered to a superb gold medal in the women’s KL3 200m at the Canoe Sprint European Paralympic Qualifier in Szeged, Hungary.

The Welsh paracanoeist finished in 48.11 seconds, 2.23sec ahead of France’s Nelia Barbosa to move closer to qualifying for a second Para Olympics in a second sport.

Sugar was 3.25sec ahead of Poland’s Katarzyna Kozikowska in third in the event which is also doubling as the World Cup 1 meeting.

It was her first gold medal at a major championships or World Cup event.

The 30-year-old competed in athletics in the T44 100m at the 2016 Paralympics in Rio before taking her talents onto the water.

So happy to come away with World Cup gold for GB, thanks for the lovely messages! #paracanoe #worldcup #gold #womenssport #roadtotokyo pic.twitter.com/uIfMvF9fa6

The Saffron Walden born para ace took silver in the KL3 200m in her first paracanoe World Championships in 2019 and also has a bronze from the Europeans in the same year.

Sugar was then forced to take an 18-month break due to the COVID-19 outbreak.

In April, Sugar set a world best time of 46.83secs for the KL3 200m at the sprint and paracanoe national selection event in Nottingham.

The 30-year-old put herself firmly in contention for a seat on the plane by winning all three rounds of the women’s KL3 200m races, which also saw her set a world best time of 46.83s in the second round.