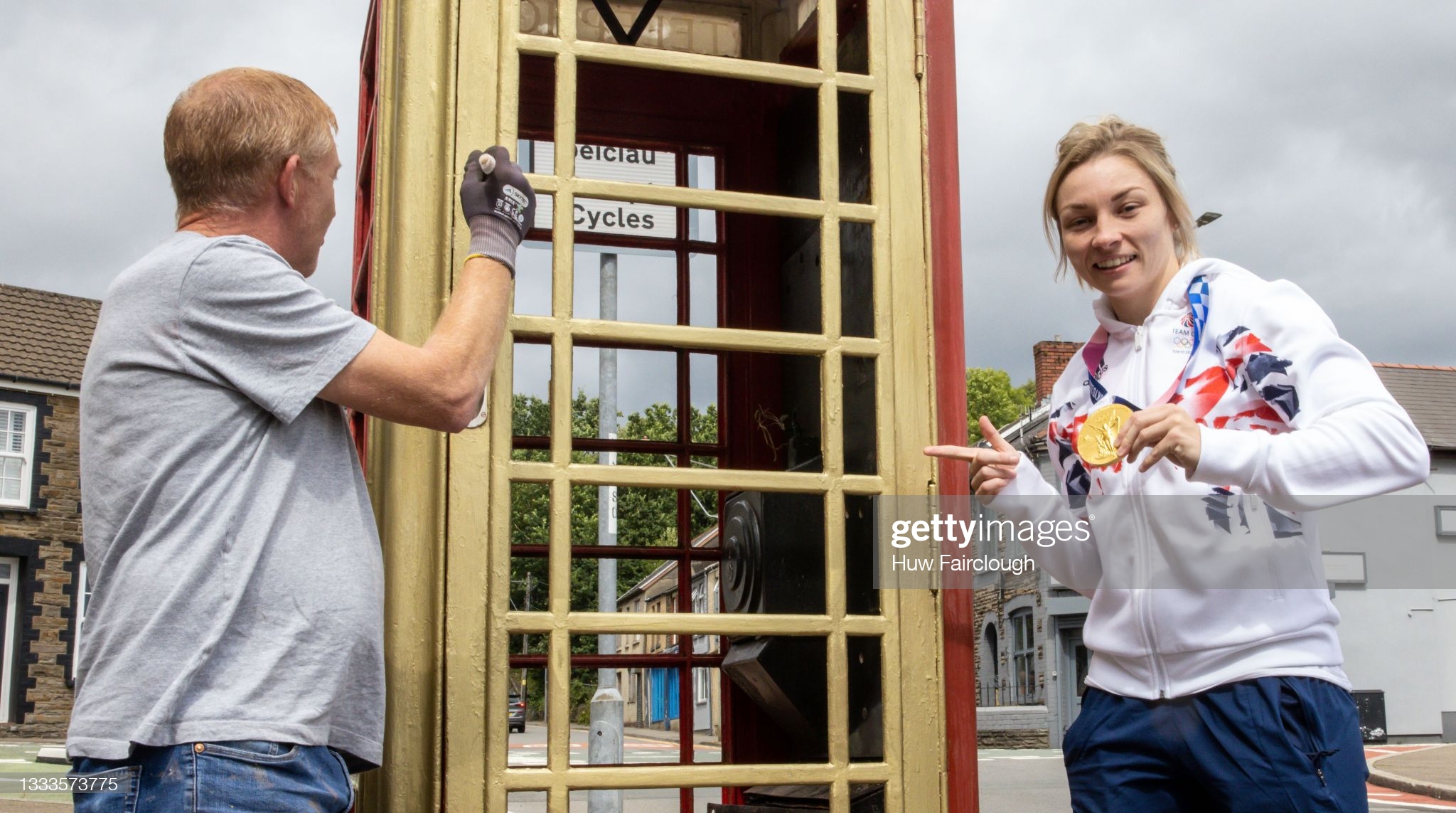 Lauren Price . . . she came, she saw, she conquered and now they have painted a telephone box gold in her honour. But what now for Wales’ Olympic boxing champion? Her national team coach with Wales, Colin Jones, tells Tom Prosser of his long-term faith in the fighter and why he believes Price will compete at both the next Commonwealth Games and Olympics.

Lauren Price has achieved something no Welsh boxer has ever managed before, but the coach heading Wales’ Commonwealth Games squad in the sport is not surprised.

Price has returned home to Ystrad Mynach to a hero’s welcome after becoming Olympic champion in Tokyo – something no Welsh boxer had previously done in history.

The female star of the Great Britain boxing squad is basking in the global recognition after she became only the second British woman to win gold in the ring, after Nicola Adams.

All that after winning over 50 caps for the Wales women’s football team and winning age group world titles in kickboxing.

Yet none of it has come as any great shock to Jones, former British and European champion and a man good enough to make the quarter-finals of the 1976 Olympics as a 17-year-old.

“She’s 110% committed to everything she does, nothing is too much for her,” says Jones of 27-year-old Price.

Jones is now the head coach of the Welsh national boxing team and has worked with Price on a regular basis throughout her career .

He is delighted, but not surprise, that she has been able to achieve her Olympic dream.

“She’s been very successful, everyone at Sport Wales is really proud of her and I think the country as a whole is thrilled about her winning the gold medal,” says Jones.

“She’s gone the extra mile, she’s someone that’s always done that and always will do that.

“That’s how she’s got to where she has today.”

Over the last couple of years in the run up to the Olympics, Price had to spend a lot of time in Sheffield which is where Team GB boxing is based.

Given the distance from Price’s home in Ystrad Mynach and the difficulties that the pandemic has delivered, Jones is hugely impressed with her dedication to the sport and says any young person looking to get into the sport should look no further than Price for inspiration.

“She stayed up in Sheffield during the lockdown, I think that says it all about her commitment,” says Jones.

“Lauren’s ideal to be a role model for any young boxer who looking to come into the game, or, in fact, any other sport.

“She’s done so much in other sports, too, but she has really excelled in boxing and it’s all down to her hard work.

“She’s always open-minded and willing to listen. Anyone looking to get into boxing particularly on the female side, needs to look no further.”

She may be a multi-talented sportswomen – who thrived in various sports before choosing boxing – but Price was always willing to take on advice and listen to others, says her national coach.

“She’s an intelligent fighter. You can look at all her performances in the Olympic Games and see how calculated she was in terms of keeping her shape.

“One of the best things she does is boxing to the coaches instructions. That’s so important.

“To be honest, I thought she won most of her fights comfortably.”

Jones was awarded an MBE in 2020 for his services to boxing in Wales and as well as his amateur career he also boxed professionally where he won the British, Commonwealth and European titles.

Many fans and pundits of the sport tipped Price to turn professional after her success at the Games but at this moment in time she intends to stay as an amateur and has eyes on the Birmingham Commonwealth Games next year as well as the Paris Olympics in three years’ time.

“I think she deserves a nice break now and then we’ve got the Commonwealth Games in just under a year’s time, says Jones.

“It would be good for her to have a few preparation bouts before then too.

“After the Commonwealth Games, the next Olympics will only be two years away so it will be all eyes on that.”

Jones has had a long career coaching in the sport and as well as Price he has worked with the likes of Welsh stars Andrew Selby, Fred Evans and Joe Cordina.

“It’s fantastic to work with such an illustrious line of names, it’s a real pleasure.

“I wanted to be an boxing superstar, now I’m an Olympic champion”

“I’ve been committed to boxing all my life and still am.

“When you look at all the boxers I’ve worked with, it really does please me.

“But Lauren is up there with any of them.”