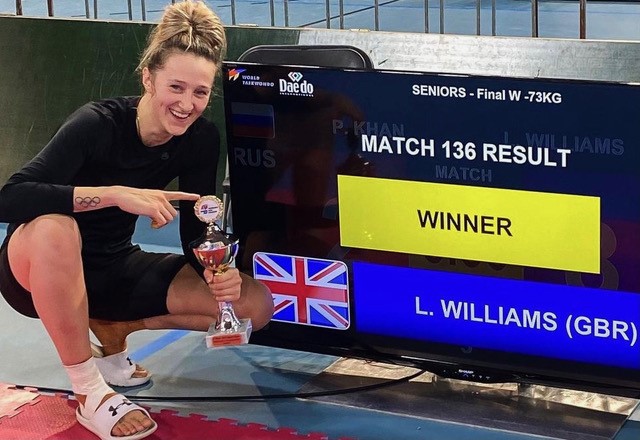 Lauren Williams won at the Dutch Open in Eindhoven.

Lauren Williams returned to taekwondo competition after Tokyo 2020 with a gold medal winning performance at the Dutch Open in Eindhoven.

Williams, who marked her Olympic debut in Japan with a superb silver medal, stepped up from -67kg to -73kg for her first fight of the Paris 2024 cycle.

“Tactically, it was a lot different,” said the Welsh star. “The girls weren’t as quick and as intense as I am used to.

“So, I had to be a little bit more clever and smarter about what I was doing. That was tough in itself but I didn’t feel out of place.”

Williams defeated Gabon’s Urgence Mouega 22-17 in the semi-final before gaining an 8-2 final success over Polina Khan of Russia.

“My preparation has been getting back to full fitness rather than competition ready,” explained the double European gold medallist.

“So, to be able to go to a competition and pull a medal out of the bag was great after the time off.

“It was also the first time for a while I have gone into a competition not injured. I was fit and ready to go.

“That was good in itself, just being able to focus on fighting and not adapt the way I fought.”

Williams is still to return to full training but knows she will need to be on top of her game in 2022.

“I am looking forward to fighting next year, especially at the Euros in front of a home crowd in Manchester.

“I’m currently enjoying this time to get some competition under my belt ready for then when the pressure will be ramped up.”

Sinden, just pipped for Olympic gold by Ulegbev Rashitov, was on course to win a first Dutch Open senior title until injury forced him to retire from the competition.

However, his confidence boosting 12-3 win was followed by an 11-3 defeat to Croatia’s Ivan Sapina, a bronze medallist at the 2019 Worlds.