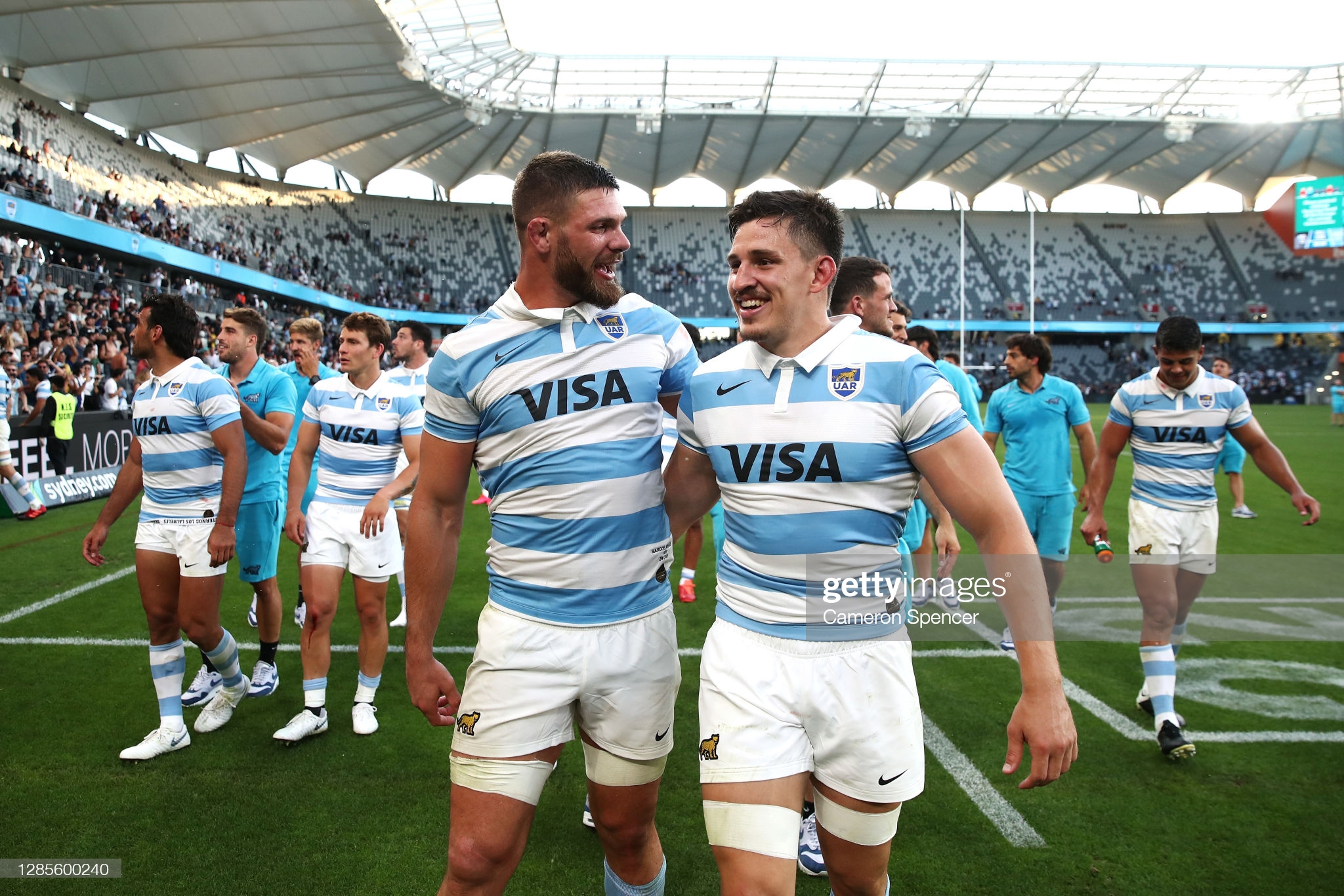 Tomas Lezana (right) with Marcos Kremer after Argentina had beaten the All Blacks. Pic: Getty Images.

Growing up as a football-mad River Plate supporter in the Argentinian city of Santiago del Estero, Tomas Lezana dreamed of a career with a round ball rather than an oval one.

But now the Pumas flanker is a Test rugby star, and after helping his country to a famous win over the All Blacks last autumn Lezana is now set to embark on a new chapter of his career in west Wales with the Scarlets.

“The rugby in the region I come from is not strong at all,” said the 27-year-old.

“Football is like a religion there. I played a lot of football growing up and I still love playing football when I’m on holidays.

“I’m a die-hard River Plate fan and Lionel Messi is my favourite player.

“In Argentina, my dream was to be like Juan Manuel Leguizamon who is from my club, and it was an honour to play with him. He was a world class player with great values, and I try and model my game on him.

“It’s an ambition of mine to start regularly for the Pumas. There’s immense competition for places in the Pumas back-row.

“We have some really good players in the back-row like Facundo Isa, Pablo Matera and Marcus Kremer but if I perform consistently well for the Scarlets then I’m hoping I can start for the Pumas.

“I played when we beat the All Blacks recently and it was amazing for me and the team because they are the best team in the world.”

The 39-times capped Argentinian international will join the Scarlets next season having plied his trade in Super Rugby for the past five years for the Jaguares and Western Force respectively.

Lezana has forged a reputation as a dynamic ball carrier, and a strong defender. And he hopes he can add a different dimension to the Scarlets back-row next season where he will compete with the likes of Blade Thomson, Aaron Shingler, Josh MacLeod, James Davies, and Sione Kalamafoni for a starting place.

“The rugby in Wales has improved a lot over the last six years and I want to improve my rugby. Scarlets for me is the best choice and the best place for me to improve.

“My focus will be on my attack because that’s an area I want to improve. I want to be able to bring some dynamism to the back row.

“I love the physical side of things and I like to take the ball forward. My favourite position is No 8 but I can play across the back-row.

“I’ve been told that the focus of the Scarlets over the next few years is to try and win tournaments. I want the same as them.

“I want to be really competitive, and I think I can help them win games. I would like to help the club get to where they want to be.”

With the Jaguares no longer involved in Super Rugby there has been widespread debate about the future of Argentinian rugby.

Lezana believes having an Argentinian presence in Super Rugby helped the game grow in Latin America, but he insists playing in Europe is better at preparing players for Test match rugby.

He said: “I think Super Rugby was really good for Argentinian rugby but I’m not sure if it was for the Pumas.

“Honestly, I don’t know. I think we need time to know that but it’s really good for the country and aspiring players in Argentina, but it was really difficult logistically.

“I don’t know if it will be possible to return to Super Rugby. They say playing in Europe is more like playing Test match rugby which might benefit the Pumas.”