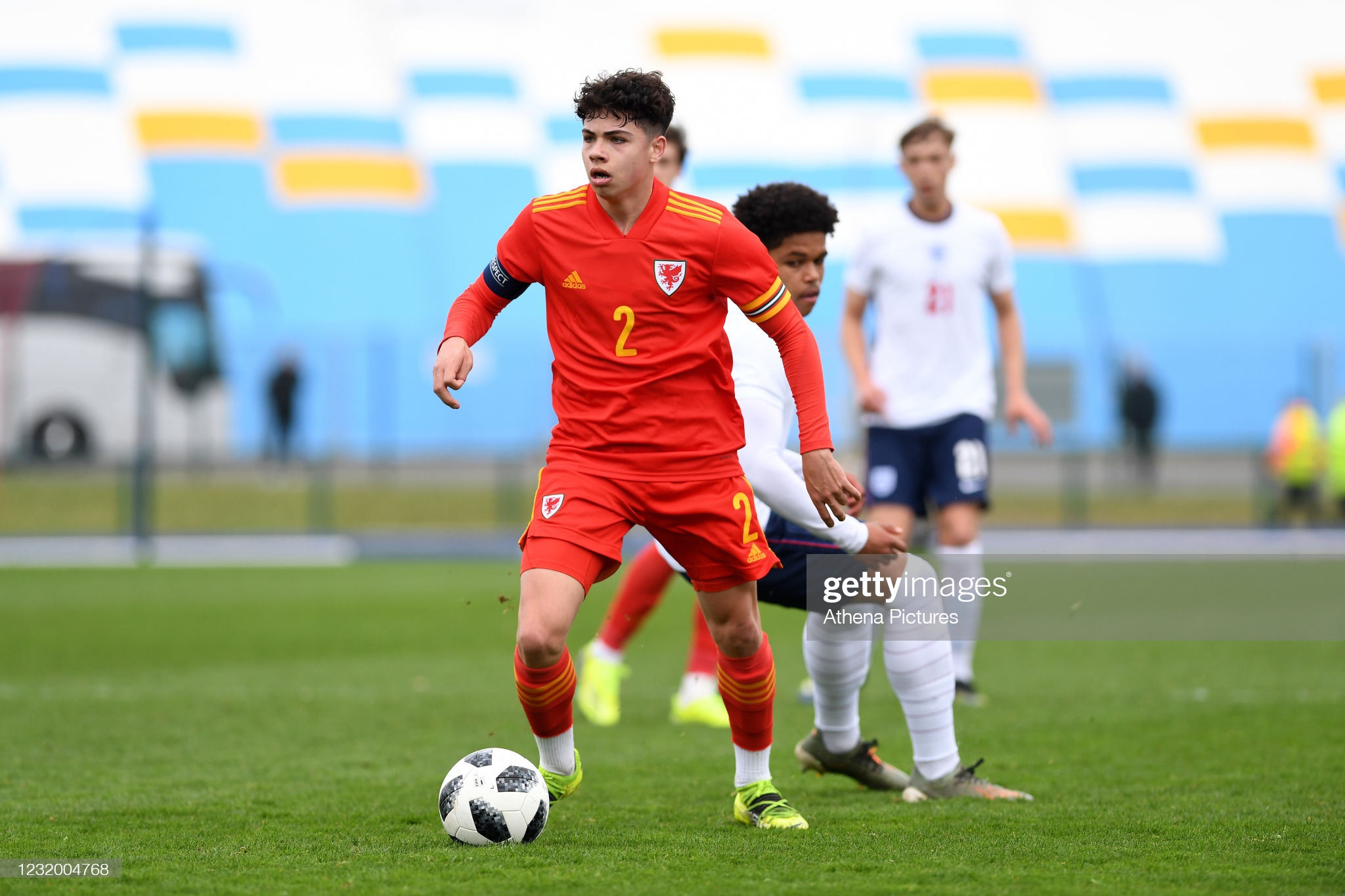 Keelan Williams of Wales U18 in action against England. Pic: Getty Images.

Keelan Williams, a 17-year-old who left Anfield to join Burnley, reckons he has already surpassed his older sibling on one front by beating him at the crossbar challenge in a park during lockdown.

Now, he wants to get another one over on Neco by being quicker to a full Wales cap after the young defender captained Wales U18s against England last month.

Neco made his Wales debut at 19 against Finland in September of last year and looks set to be a key part of Rob Page’s plans for the Euros this summer.

Keelan, just 17, moved from Liverpool to Burnley last summer, but is already a Wales age group captain and is no mood to hang around even though he is yet to make a first team breakthrough at Turf Moor.

Just over two years separate the brothers, but you could be forgiven for getting them confused in person as they look almost identical.

“I 100 per cent want to play for Burnley and Wales. My brother will always be in front of me, but I want to progress even further,” said Keelan.

“If it does come to both me and my brother being in the Wales first team, it could be a case of who plays where. There will be that rivalry between us.

“It would be incredible for me and my family if we both played for Wales. To play with my brother would be amazing because of the chemistry we have.

“He’s mostly in his apartment in Liverpool and I’m in digs in Burnley so we don’t see each other that much, but last summer in the first lockdown we were going out to the field in north Wales.

“Day in, day out we’d be kicking balls about and playing crossbar challenge. I’d always win! There is a massive field across the road so we’d go there and practice our shots.

“I talk with my brother a lot and I would say he’s my role model. I look up to him. He drives me to push further, build through the age groups, and progress to the first team.”

In last month’s international break the Williams brothers – who were born in Wrexham – came up against each other in Wales training.

Senior Dragons boss Page – who will lead Wales at the Euros in place of Ryan Giggs – could have been forgiven for wondering who was who as both siblings are full-backs and comfortable on the ball, not to mention eerily similar.

“I get a lot of that – sometimes a bit of stick, but not loads,” said Williams of his likeness to his brother. He also admits he had no option but to leave Liverpool if he wanted to make it to the top.

Williams added: “It was an honour for me to become captain of my national team at Under-18 level and my family are very proud of me.

“My brother is in the first team now and we’ve done match preparation together. We did 11 against 11 and I was on the right side and he was on the left so we were up against each other

“It’s good for me to be in and around the first team and it will only make me a better player.

“My career is going well so far. I had illnesses and loads of injuries at the start of the season so I didn’t play much. Now I’m playing week in, week out which is good for my development.

“Looking back to when I was at Liverpool it would have been difficult for me to make the first team because there is Trent Alexander-Arnold and my brother ahead of me.

“My move to Burnley has been beneficial for me and hopefully I can reach the first team there.”