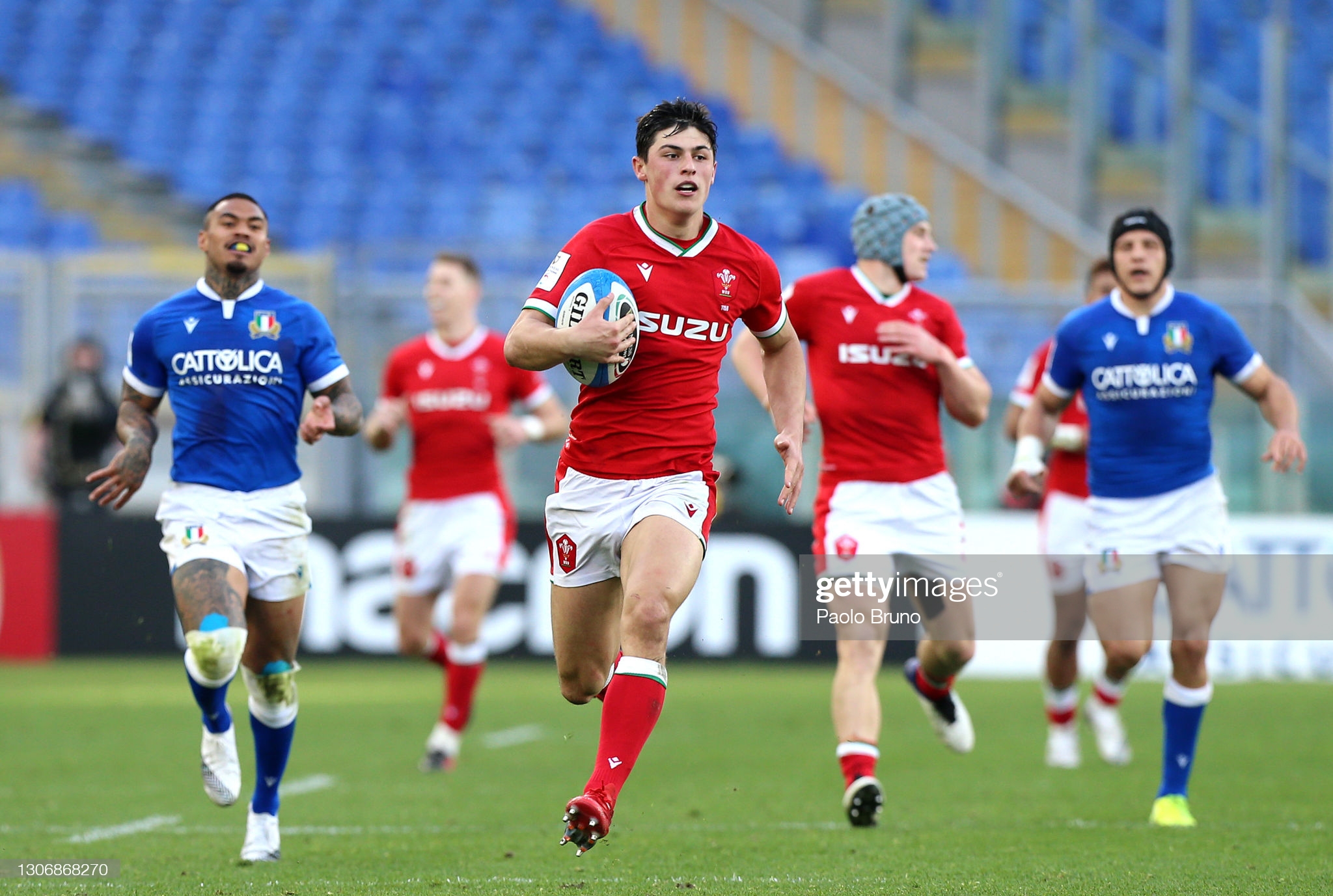 Louis Rees-Zammit of Wales breaks away to score against Italy. Pic: Getty Images.

Rhys Williams has backed Louis Rees-Zammit to come through his D-day in Dublin on Saturday – just as Williams did himself for Wales 21 years ago.

Rees-Zammit will make his first appearance at the Aviva Stadium, Ireland’s noisy citadel, when Wales open their Six Nations campaign – and begin the defence of their trophy – in a match that is live on S4C.

He may already be a British and Irish Lion, but Rees-Zammit has only just turned 21.
Coincidentally, it is 21 years since Williams, then a few days past his 20th birthday, made his Wales debut in the Irish capital in a 23-19 victory for the visitors.

Williams gave an unflinching, nerveless performance that went a long way to underpinning the Welsh victory that day – and believes Rees-Zammit can do the same 21 years later.

“My father came to the hotel on the morning of the game when I made my debut and I had a chat with him,” recalls Williams.

“After the weekend, he admitted he had never seen me looking so white that morning and was a bit, not fearful, but in full realisation that this was a big day.

“I had never experienced the pre-match hype and noise and everything else. The game is almost the easy bit because that’s when you’re in your comfort zone.

“But I had seen the headlines on the newspaper posters in the streets – ‘Lansdowne Road – graveyard for full-backs’, that kind of thing.

“On the morning, it was bit grey with lots of wind and I thought, ‘this is going to be a tough day.’

“The crowd feels as though they are on top of you, there was a real intensity in the atmosphere, but that’s international rugby for you.

“Thankfully, instinct takes over and it was a good day.”

Unlike Williams two decades ago, Rees-Zammit is already a proven international with 12 caps and five tries to his name and has quickly established himself as one of the most lethal finishers in the global game.

But he has never had to deal with an Ireland crowd in full voice, trying to catch a ball swirling above him in the Dublin air, with a hungry pack of forwards heading towards him.

Williams says the Gloucester flier knows what is coming and predicts: “He will get tested this weekend with the high ball. All the back three players will. That’s Ireland out in Ireland.

“The kicks to contest, the high balls, the Irish wraparound plays – which are as good as any team around – this will be a stern test for him.
“But you have to focus on what you enjoy about the game and what your strengths are.

“Louis needs to get his hands on the ball as many times as he can and if there’s a chance of an open space, then he won’t lack confidence because that’s what he’s brilliant at.”

Williams admits Wales are in for a very tough assignment but the former Cardiff full-back – who went on to win 44 caps and a Grand Slam in 2005 – believes the more senior players have a vital role to play this weekend in settling the likes of Rees-Zammit, Taine Basham and replacement Dewi Lake.

“The senior players set the tone in the week and the game day becomes the relatively easy bit.
“I had Scott Gibbs and Allan Bateman in front of me – people I had supported since I was a kid.

“Gibbsy turned round and one point and some something like, ‘you’re having an amazing game – keep it going.’ I suddenly thought, ‘wow – Scott Gibbs has just told me how amazing I am!’ and I felt as though I grew another couple of inches taller.

“Rupert Moon really looked after me well in the build-up, gave me a cwtch during the anthem. It’s little things like that which you don’t realise at the time, but they help you get through the day.

“I can remember little details, like Stephen Jones scoring his first try for Wales and Neil Jenkins coming off the bench to kick two massive penalties.

“Ronan O’Gara put one up very early, put too much on it, and I took it. Rob Henderson was chasing it down and was a good five yards away. I took a mark quickly, had Shane (Williams) outside me, so started counter-attacking.”

He was helped, he says, by the ignorance – as much as the fearlessness – of youth.
“I didn’t know what I didn’t know. It turned out to be a decent game for me, but you don’t really have any knowledge of anything so you don’t feel that anxious.

“But this one is a very difficult task ahead of Wales. This is a formidable Irish team as we saw in their game against the All Blacks in the autumn.

“But when we are the underdog, we always come out fighting.

“We are down on the number of senior players but that brings opportunities – like that day was a chance for me.”