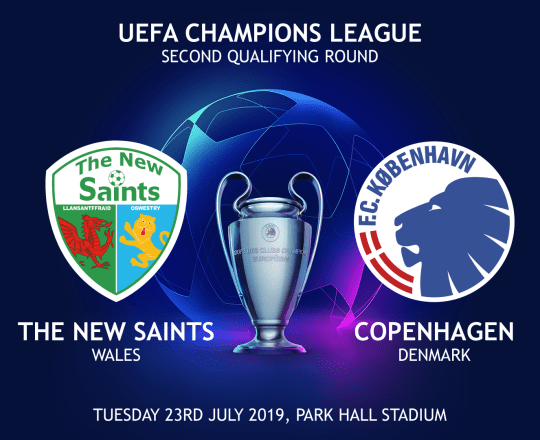 Managers Scott Ruscoe and Stale Solbakken had differing views on a critical moment during the Uefa Champions League tie at Park Hall.

The Danish visitors were 1-0 ahead when Austrian Alexander Harkam awarded a penalty against Cymru Premier League champions TNS on the hour.

Defender Keston Davies was adjudged to have fouled Pieros Sotiriou, who had scored Copenhagen’s first goal, and Harkam pointed to the spot.

Robert Skove converted the penalty and doubled his teams lead on the night.

“Pieros tried to shoot and it was a hard tackle on. His ankle. He had to go off, which hits him hard.

“It was good judgement by the referee.

“We have a fair chance of making progress now, but TNS are a well organised team. They had 10 men behind the ball, but they also play good football.”

Ruscoe’s view was completely different, saying: “He [Sotiriou] had his chance to shoot, missed it. The defender had to make a lunge because it was last ditch, but their forward had missed the chance.

“How often would you have the ball brought back with a penalty awarded?

“Really it’s hard enough as it is. They don’t need the ref trying to help them out. It felt a little unjust.

“They’re a good side, but didn’t really carve us open on numerous occasions.

“We had three good chances (Aeron Edwards, Adrian Cieslewicz, Jamie Mullan) and the levels of performance put in against the best team in Denmark were above our grade.

“At 2-0 we are still in the tie and that’s credit top the boys. I am proud of every player.

“It will be daunting in front of their supporters, but we can score away goals and are ready to go again.”

They are favourites for a place in the third qualifying round in the second leg at Parken Stadium next Wednesday.

Saints progressed to the second qualifying round after a 3-2 aggregate win against Kosovan club Feronikelli and will still be playing in Europe even if they do go out of the UCL. The losers over two legs are placed in the Europa League.

In the searing heat of Park Hall, The New Saints FC created the first chance after two minutes when Ryan Brobbel blasted over the bar.

The first goal was scored after 18 minutes when Sotiriou converted from close range, while Copenhagen’s penalty was awarded just before the hour.

Goalkeeper Paul Harrison dived the right way, but Skov was accurate with his finish and completed the 2-0 scoreline.

TNS still believe they have a chance, but they must take their chances in Copenhagen if they are to open up the tie again.