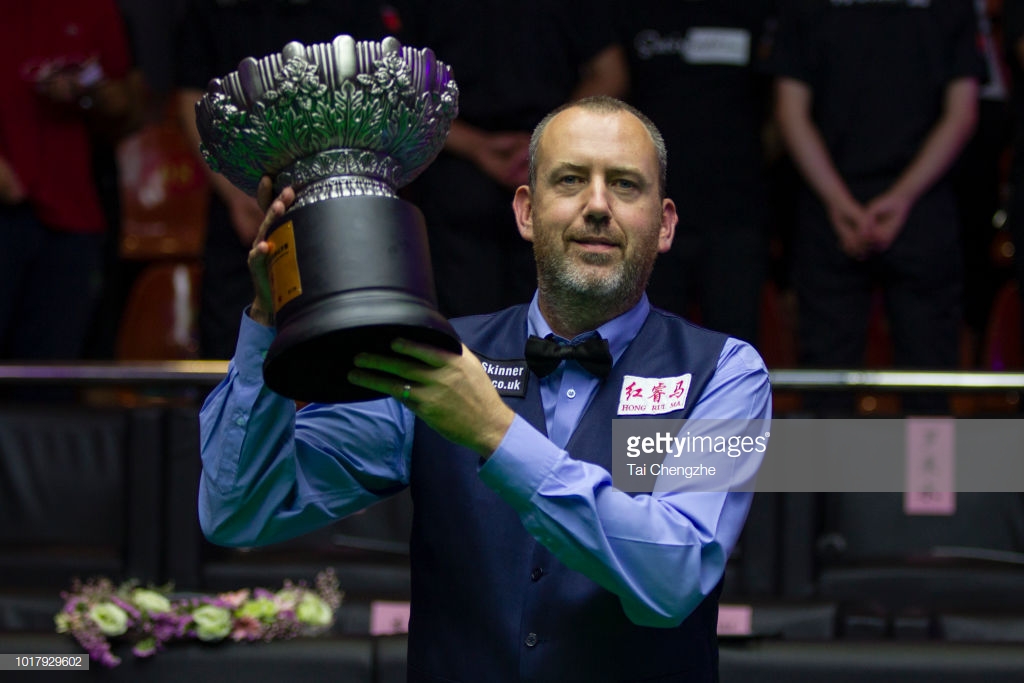 Mark Williams after his victory in China. Pic: Getty Images.

Mark Williams booked his place in the second round of the 19.com English Open – before hinting that he may hang up his cue at the end of the season.

The three-time world champion was made to dig deep by fellow Welshman Jamie Clarke at the K2 Centre in Crawley, eventually closing out a 4-2 win with a tournament-high 142 total clearance.

But afterwards Williams claimed that his love affair with the sport he has graced for 27 years has hit a rocky patch.

“I’m not putting the work in, so I don’t deserve to get anything out of the game.

“Sometimes I feel quite close to finishing, to be honest.

“I’ll see after the world championships (in April), I’ll re-evaluate then.

“It’s something I’m going to think about.”

After winning his third world title eighteen months ago, Williams made no secret of the fact that he intended to enjoy the trappings of his largely unexpected return to the top of the game.

Taking his foot off the gas resulted in an unspectacular 2018/19 season, though he did enough to maintain his place in the top three of the two-year rankings.

But he admits he has found it difficult to regain his focus away from the TV lights and tournaments.

“I’ve got plenty of time to practise,” said Williams, “but I’m always finding a reason not to, whether that’s golf, the cinema or whatever.

“I think in the last 12 months, I’ve set foot inside my snooker club 10 times.

“I’m enjoying not playing, which is strange for me.

“I’ve felt like this before, but this time the feeling is lasting a lot longer.

“Don’t get me wrong, I’m giving 100 per cent when I’m out there playing a match.

“I just basically can’t be bothered to practise.”

Another reason for his disenchantment is an often gruelling playing schedule.

Following the example set by Ronnie O’Sullivan and John Higgins – two other multiple world title winners from the ‘Class of ‘92’ – Williams is already cutting back on the number of tournaments he enters.

But perhaps surprisingly, he has chosen not to defend his World Open title in Yushan later this month – the last ranking event Williams won.

“I’m not going to China half as much as I used to, not until I get the spark back,” he explained.

“It’s a long way to go, with the flights, the taxis – everything, really.”

While Williams prepares to face Michael Holt in the second round, Llanelli-based Clarke was left to reflect on another difficult first-round assignment.

“We all know that one big win or a good run in a tournament can kick-start a season,” said the 25-year-old, ranked 84 in the world.

“Suddenly, you’re on fire and off and running.

“But I’ve had a couple of tough first-round draws this season against top 16 players – and today was no different.”

Dominic Dale rolled back the years with a 4-3 win over Ding Junhui.

‘The Spaceman’ found himself 2-0 and 3-2 down before clinching the deciding frame, setting up a last-64 clash with Xu Si, a 4-2 winner over Matthew Stevens.

Neath’s Michael White bowed out by the same scoreline at the hands of Zhou Yuelong, while Duane Jones battled back from 3-1 down against Lu Ning, only to lose the deciding frame.

Jak Jones failed to emulate his run to the fourth round of this event three years ago.

The Cwmbrân cueman let slip a 2-0 lead against Brandon Sargeant, before the Englishman – ranked 106 in the world – won the deciding frame of their best-of-seven contest.