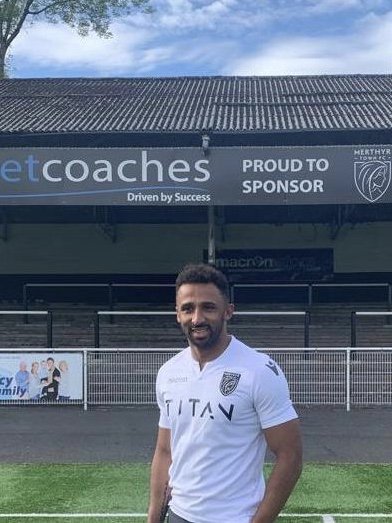 Merthyr Town must beware the backlash when they travel to play Dorchester Town in Dorset on Tuesday.

The Martyrs powered to an impressive 2-0 home win against Blackfield and Langley at the weekend, while the Magpies slumped to a 6-0 defeat at Westyon-super-Mare.

Dorchester manager Callum Brooks was furious with his team, who have now conceded 27 goals in 11 matches.

That is the worst defensive record in BetVictor Southern League Premier and Brooks said: “It was an abject and shocking performance. I take full responsibility – I put that group together.

“We’re all embarrassed. It was so far off where you need to be to be competitive at this level.

“We lost 11 one v one battles, lost unit battles, lost overall battles and the only thing we can do is take responsibility for that.

“I apologise to anybody who had the misfortune of having to endure watching that.

“If I have players who’ve gone away thinking ‘I’ve done alright but it was because of this’, they’re not the players I want to move forward with. You can’t have players shirking their responsibility.

“Individually, collectively, from staff down to players I only want to be surrounded by people who look at their part and go ‘what do I need to do to get better? That was so far off acceptable it’s not funny.”

“Nothing was good enough.”

Merthyr Town faced a problem before kick-off in their League clash with Blackfield and Langley when Adam Davies, who had been named in the starting line-up, pulled up injured.

New signing Dan Summerfield, who had been among the substitutes, was called up and he said: “It was a bit of a shock to start and play 90 minutes, but I’m chuffed with three points and a clean sheet.

“Now we play Dorchester and that’s a difficult fixture. I’ve been down there a few times and it’s a nice ground. We need points from the two away fixtures coming up.”

The Martyrs play Dorchester away on Tuesday and then go to Beaconsfield Town before Salisbury City visit the MetCoaches Stadium on Tuesday, October 22.

The loss of Davies before the start was followed when Ben Swallow went off after inside the first quarter of an hour. At the end of a week in which central defender Craig McDonnell left the club because of ongoing work commitments, the Martyrs are due a little good fortune.

McDonnell made almost 50 appearances for Merthyr Town after moving from JD Cymru South side Taffs Well during 2018.

The Martyrs started the match against Blackfield, based in a village near Southampton, in style and scored twice in the first eight minutes.

Gethyn Hill scored after two minutes from an accurate pass from Ian Traylor and then Eliot Richards ran on to a beautifully weighted pass to make it 2-0.

Hill went close again, while Richards fifed against a post after Hill squared to pass to him.

Man of the match Hill linked with Kieran Lewis and teed up Traylor, but the visitors kept Merthyr out.

Former Cardiff City trainee Hill found the net just before the hour mark, when he turned Traylor’s pass into goal only to be adjudged offside.