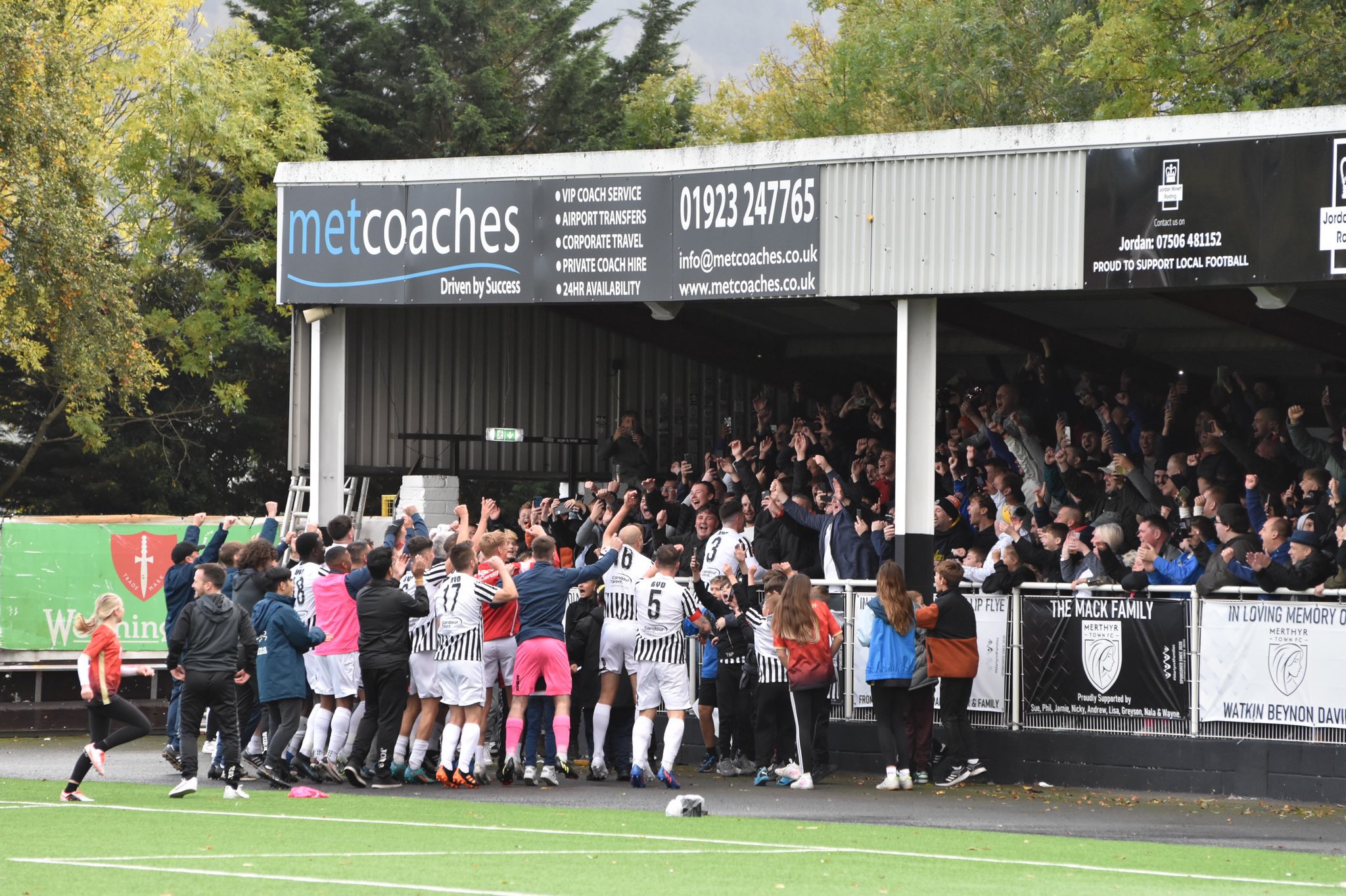 Merthyr Town players celebrate with their fans after their victory over Folkstone. Pic: MTFC

Merthyr Town are dreaming of FA Cup glory this weekend – and a bumper pay day around the corner which could secure their long-term future.

Merthyr reached the first round proper following a tense 2-1 win against Folkstone Invicta, in front of a raucous 1,457 strong home support at Penydarren Park.

Now, they travel to Buxton on Saturday – the first time they have reached round one of the most famous domestic football tournament in the world since 2005.

It means they stand just two victories away from the headline romance of the third round – and a possible clash against Premier League big boys such as Manchester United, Liverpool, Arsenal or Manchester City.

Back in 2005, the Welsh club lost 2-1 at home against Walsall, but they are hopeful of going further this weekend, although the odds may be loaded against them.

Michael says: “As a kid I always loved the FA Cup final.

“It was always sunny, friends would always go out in the street and have a kickabout, and we’d all wait excitedly until kick off. I certainly grew up feeling like it was a magical competition.

“Since I have been involved in non-league football, I have had some great days in the FA Cup.

“These are the type of moments teams, communities and supporters really come together and create memories which last a lifetime.”

Merthyr have had disappointing time since their win over Folkstone Invicta, losing against Dorchester and Met Police in the Southern League Premier South.

But Michael hopes the magic of the Cup will help his players pull out a huge upset against Buxton, who play in the Vanarama National League North, one tier above Merthyr, in the English football pyramid.

“As a manager you need to find that edge for the players, and the FA Cup naturally brings that, that motivation is easy.

“But what we have struggled with in the last week, is that when you have those huge games, the other games don’t quite feel the same,” added the 36-year-old.

“The win at home against Folkstone, with a huge crowd in was unbelievable. It was the best atmosphere I have ever been involved in.

“The roar when we won the ball was deafening, it was like being at a league ground. What a brilliant atmosphere!

Merthyr Town Football Club is delighted to confirm the appointment of Paul Michael as the club’s new First Team Manager.

“We have had a difficult few weeks since then, and we are fully aware we need to improve our performances. We don’t have to look too far for inspiration, though, after beating Gloucester, who are at the top of that step above us.

“Buxton are a good team; they have won both their last two games against Darlington and Southmoore who are excellent opposition.

“They are in great form and we know it is going to be tough. They have loads of Football League experience in their team, but it will be a great opportunity for our young players to go up there and really show that they can compete.”

Just two seasons ago, Merthyr were mothballed from their league, due to the effects of the Covid pandemic and the club came under the ownership of their own fans.

Now, they are potentially just two wins away from hosting a Premier League club.

“That’s the magic of the Cup,” adds Michael.

“For the club to be here is a huge achievement having gone through that difficult period when the only income coming in was from income generated from the ground and events. Survival has been an incredible effort from everyone involved.

“And yes, you do start to think about drawing the big teams. Your mind wanders.

We are counting down the hours now until take the stage in the @EmiratesFACup First Round away at @Buxton_FC this Saturday!

“We have done well to get to this stage and we are pretty close to playing against some of the best teams in the world.

“It would be astronomical to play against the clubs you all supported as kids. We know it’s still a long way off, but that’s what the Cup is for – we can all dream and, hopefully, it will come true. You never know!

“There were so many young people at Merthyr who now want jerseys and to come back again. We are inspiring them to support Merthyr Town, which will safeguard us for years to come.”

One Merthyr player who should not be overawed by FA Cup fever on Saturday is goalkeeper Will Fuller.

The 28-year-old spent 10 years playing for Cardiff Met and twice made appearances in the UEFA Europa League.

Having spent a decade playing in Wales in the Cymru Premier League, Fuller set off into non-league football with Bath, but ended up back in Wales, playing for Merthyr.

Fuller says: “Merthyr is a club with a lot of history and we want to write our own little bit.

“We definitely want to hear some more dodgy singing, so hopefully we will get a lot more of that if we can get a result.

“The pressure is on Buxton; they are at home and are in the league above us. We have nothing to lose, so we can just go out there and enjoy ourselves.

“If we can execute our plans, there’s no reason as to why we can’t get a good result on the day.

“I really hope we have inspired a lot of youngsters. We have a really good group of young supporters and hopefully we can make sure they continue to come back.

“Merthyr is fan-owned, so maybe one day they will play a part in that and welcome us players back when we are old and grey!

“That’s how clubs at this level survive, – by engaging in the community and the youngsters within that.”

The goalkeeper – who is now chief executive officer at Cardiff Met Students Union – has been enjoying his time with the Martyrs and he hopes their Cup run has helped to give back to the fans.

We covered:
Vicky’s karaoke sessions in Merthyr (which she LOVES)
⚽ Sponsoring the Martyrs
Hopes of more Line of Duty

“It was nice talking to fans about what the club means to them, and what it means for them to have a successful football club in the town.

“I’ve seen Jonny Owen in amongst things in the crowd, but I’ve also been able to sit down with him afterwards and have a chat.

“He was really proud of what we had achieved. He’s a really important part of the club, in terms of his backing.

“We also see Joe Morrell’s family around the place a lot as well.

“His Euro 2021 monolith is proudly sitting in the garden of remembrance behind one of the goals. It is nice to have a player at that level, keeping an eye on us when he is potentially with Wales at a World Cup.”

“If we get through on Saturday, we’d be happy to host anyone. The way the ground filled up for the last game in the Cup shows there’s a huge amount of interest from the community.”