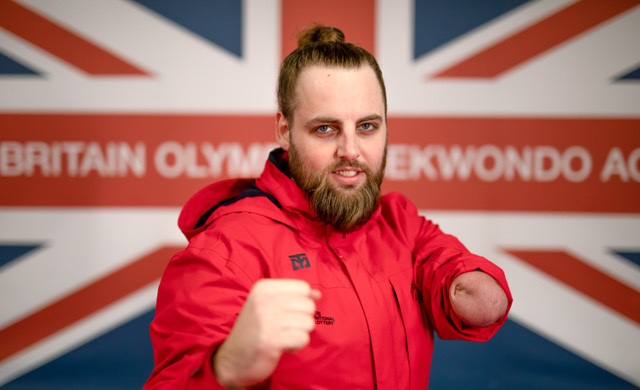 The 31-year-old became the first Brit to strike gold at the World Para Taekwondo Championships in 2019.

St Clears-based Bush was a talented shot putter and javelin thrower before he decided to switch his sporting focus in 2017.

Now the Tokyo 2020 Para hopeful’s story could inspire other athletes to join the Para Taekwondo programme, operating from the National Taekwondo Centre in Manchester.

“I was doing javelin and had an injury which ruled me out of qualifying for the Rio Olympics in 2016,” said Bush, who had also enjoyed success in Japanese and Brazilian Ju-Jitsu.

“Through Sport Wales, I heard Taekwondo was going to join the Paralympic movement and because it was similar to the other martial arts I had done, they brought me up for a trial at GB Taekwondo.

“To win the world title after coming into the sport late was a fantastic achievement. But I am sure there are many other talented athletes who would love Taekwondo and can be as equally successful.”

Desirable but not essential is a background in Kickboxing, Karate, Tang Soo Do (karate based Korean martial art), Muay Thai or Thai Boxing.

Athletes, like Bush, from other dynamic, explosive and sporting backgrounds also will be strongly considered.

“Essential Is a strong motivation to ‘fight’ and enjoy a combat environment.”,” says talent scout, Derek Morgan, on the lookout for athletes with the potential to compete at the 2024 and 2028 Paralympics in Paris and Los Angeles “

Applicants should be aged 14 onwards and possess an ability to meet the K43 and K44 para classifications.

These include athletes with unilateral arm amputation (or equivalent loss of function) or loss of toes which impact the ability to lift the heel properly.

Taekwondo is one of only two new Paralympic sports at Tokyo 2020, 12 years after the inaugural Para Worlds and another four before the sport was created.

To submit your expression of interest to GB Taekwondo visit http://www.gbtaekwondo.co.uk/talent-pathway/expression-of-interest/para/