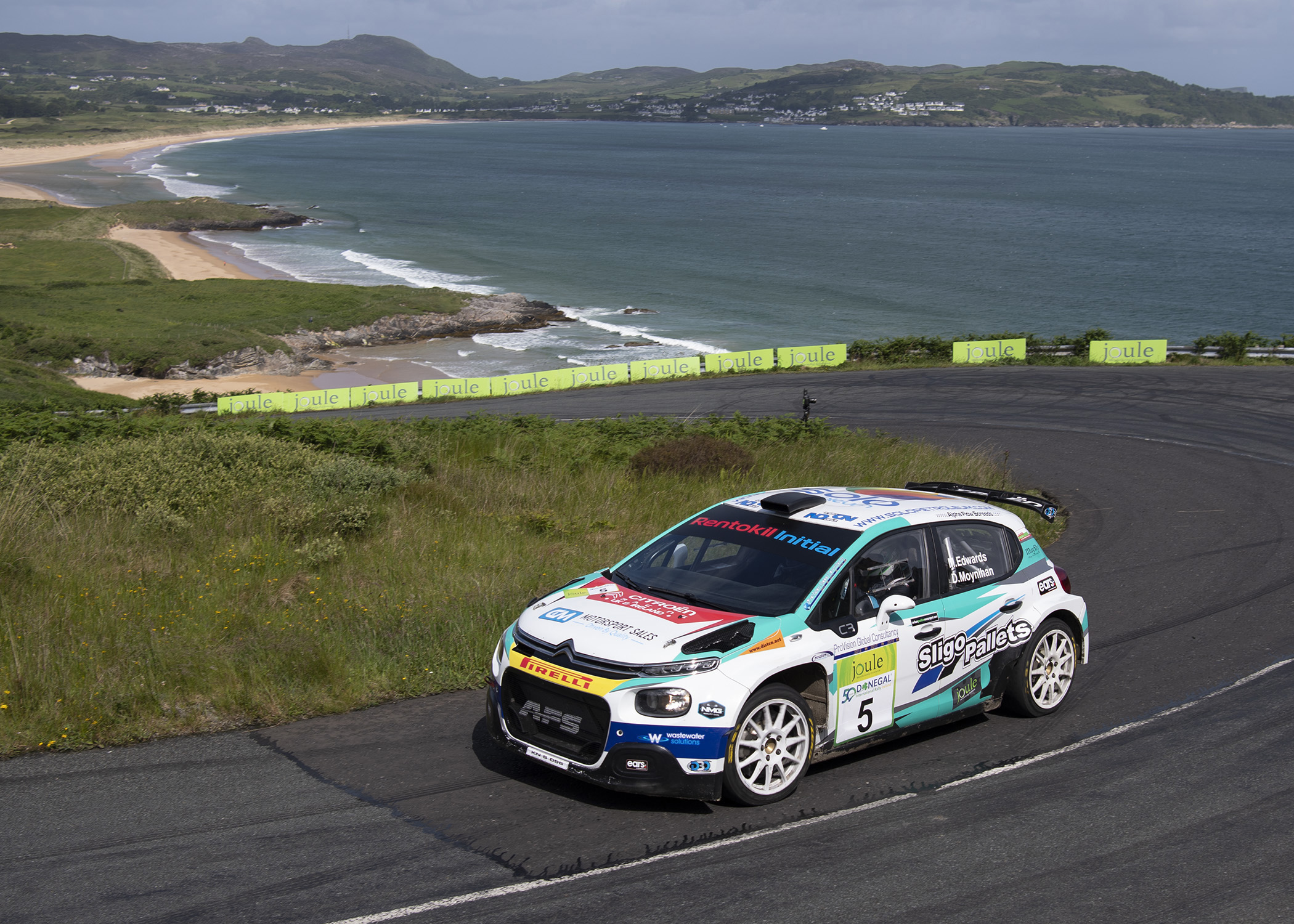 Matt Edwards came close to winning the famous Donegal International Rally at his first attempt, but after a truly heroic performance he lost the lead of the event when his Pirelli-shod Citroën C3 R5 left the road with just four stages from the end of the three-day, 20 stage and 187 stage mile Irish Tarmac Championship classic.

Whilst the car stood up to the fifth-gear incident extremely well, and the emergency procedures were carried out to perfection, Edwards sustained a couple of fractured ribs and his co-driver David Moynihan suffered rib, shoulder and hip injuries.

Both were kept in hospital overnight as a precaution.

It was a sad end to a magnificent outing, made all the more remarkable by the fact that it was Edwards’ first rally in a four-wheel drive car since he’d won the 2021 British title on the Ulster Rally in a Volkswagen Polo GTI R5 seven months ago.

The Colwyn Bay driver had been battling with Callum Devine/Noel O’Sullivan (Volkswagen Polo GTI R5) over the first two days, with the gap between first and second just 5.6 seconds at one point.

A half spin at a junction in Knockalla (SS9) cost Edwards 20 seconds, but he’d regained half of that lost time by the end of the second day.

Edwards took the lead of the event on Sunday’s opening stage, Gartan (SS15), when Devine retired after hitting a hay bale chicane.

In another dramatic turn of events, he damaged his Citroën C3 R5 near the start of the stage, forcing him into instant retirement as well.

“Because of the amount of time we’ve been out of an R5 car and the Citroën being new to me, we weren’t really expecting to be in the fight for victory in Donegal,” said Edwards.

“In just two weeks we’d gone from not having a deal to tackling the opening stage of the Donegal International for the first time.

“It was nice to get that feeling back of driving an R5 car after seven months away from competing at this level.

“I was pleased with how I’d adapted to the C3, the Pirelli tyres were working well and I was happy with our pace.

“David [Moynihan] was doing a great job on the notes and considering that we’d never rallied together before everything was going extremely well.

“After the first couple of stages, we both said how much we’d missed the buzz of competing in an international rally in an R5 car.

“We had a half spin which cost us twenty seconds, but we’d regained half of that lost time by the end of the day and with a couple of fastest stage times in the bag we were happy.

“We started the final day of the event full of confidence.

“These were all new stages for me as well, so the rally was far from over.

Meirion Evans / Jonathon Jackson take flight, on their way to a 3rd overall at the 2022 Donegal International Rally #donegalrally pic.twitter.com/jORUctNUjY

“We were having a great battle for victory with Callum [Devine] and it was sad to see him pulled over by the side of the road on the day’s opening stage.

“We were looking forward to having our first run over the Atlantic Drive stage, but we didn’t get around a fast left-hand corner early in the stage.

“We haven’t determined the cause yet, but we left the road in fifth gear and that was our rally over.

“All the safety equipment built into the car did its job and the event’s emergency procedure worked perfectly.

“I’m just very disappointed that our Donegal Rally ended with both David and myself in hospital.

“Nevertheless, the Donegal Rally was an amazing experience.

“The stages, fans and the competition were fantastic, and I’d love to come back one day and finish the job off properly.”

Donegal….What a rally😍 Yesterday threw up it’s fair share of surprises and we managed to stay out of trouble and sneak onto the podium 🥉Nice to get a stage win in Glen too👌 Thanks to all the bots for a faultless car, JJ on the notes, Dad and Sean and to all our supporters👍 pic.twitter.com/aV92QuA6N2

Meirion Evans upheld Welsh honours by finishing third in his Castrol-backed Volkswagen Polo GTI R5, but was concern for his friend and rival.

“What a weekend that has been, I’m so chuffed to take a podium and second-placed Irish Tarmac Rally Championship points,” said Evans.

“We knew we’d be up against it a bit against boys who have so much more experience of the stages, but we kept doing our own thing and kept in the mix.

“It was really pleasing to take a fastest time on the final day as well.

“Donegal is the jewel in the crown of the championship, and a big thank you to the organisers for keeping the show on the road.

“Thank you to all the boys in the team for their hard work too – the car was faultless yet again.

“I hope you recover quickly – you gave us all quite a scare!”