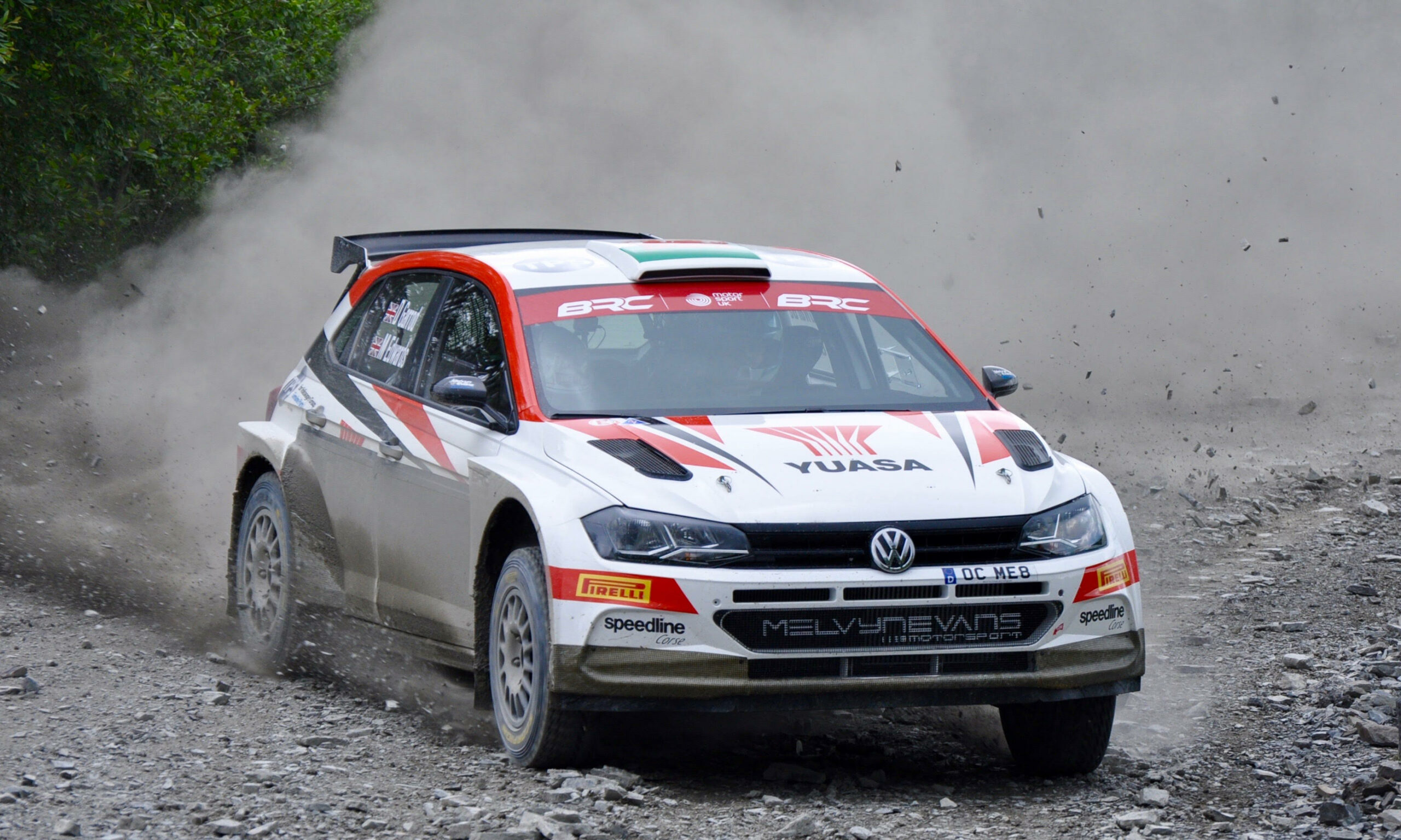 Top seed Matt Edwards puts his car through its paces in testing for the Nicky Grist Stages this week.

After a 518 day enforced break caused by the Covid-19 pandemic, rallying will return to the Welsh forests this Saturday with the Nicky Grist Stages – although the event will be held behind closed doors and without spectators.

The first major forest rally in Wales since February 2020 has received a capacity 170 car entry.

In fact, the organisers have increased the number of starters from its original 150 car field, just to try and accommodate as many of the 200 plus crews who had placed an entry.

And after 17 long months, Matt Edwards/Darren Garrod will have the honour of running as top seeds, when they contest their first gravel rally in their Yuasa Rally Team Volkswagen Polo GTI R5.

Edwards won the Quinton Motor Club-organised event in 2018, which helped him towards his first of two British Rally Championship titles.

He finished fourth on the opening round of this year’s BRC – and will be keen to at least beat the three drivers who out-scored him first time out.

These champions will be under pressure from the likes of Ian Bainbridge/Will Atkins, who scored maximum Welsh National Rally Championship points on the 2020 Cambrian Rally and won last December’s Rali Adfer Coedwigoedd Cymru test event in a Škoda Fabia R5.

Also in a new car for this year is the 2019 Welsh Junior champion, Tom Llewellin. Tom, co-driven on this occasion by Ross Whittock, makes his competition debut in a four-wheel-drive Mitsubishi Mirage. Elsewhere in the field, Paul Walker/Geraint Thomas have exchanged their Mitsubishi for a Subaru Impreza.

With great rallies to learn their skill and the lure of a magnificent prize of a test drive in a PCRS Rallysport-prepared Hyundai i20 R5 (courtesy of OnThePaceNote), the Junior category is buoyant again this year.

George Lepley/Tom Woodburn will compete in their Mitsubishi Evo X, Ioan Lloyd/Sion Williams will move up from the Formula 1000 Junior Championship (and a few great road rally results) to a Peugeot 208 R2, and Zak Hughes/Ian Beamond bring their Renault Twingo R2 Evo.

Other Under-25-year-old hard chargers to look out for include Aoife Raftery/Dylan Doonan (Ford Fiesta), Charlie Todd/Glyn Thomas (Ford Fiesta) and Gethin Price/Matthew Baddeley (Nissan Micra). Lining up alongside will be Jason Black/Karl Egan (Toyota Starlet) and Maxx Bradshaw/Liam Andrew Whiteley, who travel from the Isle of Man in their Mitsubishi Evo III.

The ever-popular Restruct-sponsored Two-Wheel Drive category has received one of its strongest entries. Jonathan Brace/Paul Spooner, Steven Ormond-Smith/Matty Daniels and Frank/Lauren Kelly (to name but a few) are all in Ford Escort Mk2s. Andrew Davison/Tom Murphy bring their Talbot Sunbeam, Alan Desbois/Peter Littlefield wheel out their Peugeot 306 RWD, while David Jones/Glyn Price and Kevin Metcalfe/Ian Jones both appear in BMW E30s.

More than 50 crews are eligible for the RAVENOL UK Welsh Challenge, which rewards drivers and co-drivers who have yet to finish in the top 10 overall of a Championship round and is open to any competitor in any class.

The new class for Road Rally spec cars has sparked a lot of interest, with the likes of Graham Thatcher/Tim Samuels (Peugeot 206) and the Escort Mk2 duo of Ricky Crone/Daniel James and Rob Wood/Osian Davies battling for early class honours.

Such is the inclusive class structure of this year’s Pirelli Welsh National Rally Championship that a driver and co-driver are likely to be eligible for multiple awards. David and Toby Brick are a great example of this, as the giant-killing Vauxhall Nova crew will be battling for honours in the Overall, RAVENOL UK Welsh Challenge, Two-Wheel Drive and Over 50s categories!

We made really good progress with the setup in the morning and it was nice to get back out behind the wheel again with Dale Furniss !

Huge thanks to my sponsors, we’re all looking forward to the weekend 🤩👌🏼 pic.twitter.com/6x9v8jg1sb

“With just a few days to go, perhaps it’s time to reflect on the massive undertaking by all stakeholders involved in making this happen.

“Events of this stature under normal circumstances take up to eighteen months to organise. Add in a pandemic, and the timeframe is the same, but the commitment required over the same period is immeasurable.

“The rally fraternity, though, has responded as only they can with a fantastic entry received in an unbelievable fifteen minutes.

“I can’t wait to see the outcome.”

The first forest rally to be held in Wales since the easing of restrictions will run under strict Covid-19 compliant rules, and because of the high number of military training exercises currently taking place on the Epynt military range, the event is unable to allow spectators.

Instead, live streaming, (facebook.com/specialstage), live timing (ewrc-results.com) and a new online tracking system (rallytracking.co.uk), which will follow every car through every stage – and a host of other online channels will make the 2021 Nicky Grist Stages one of the biggest live online streamed rallies in the UK, outside the WRC.

Not even the event’s title sponsor will be there.

“I have to travel to Builth Wells to deliver the trophies, and after that I’ll be heading back home,” says Nicky Grist.

“I’d love to go out and watch on the stages, like I do every year, but I’ve no reason to be there and I feel it’s important to set a good example.

“I sponsor the event, but come the day of the rally I’m just a spectator – and I have to respect, just like everyone else has to, that no spectators are allowed.

“There is currently a heavy amount of military training on the Epynt range, and we are very grateful to the MOD for allowing the rally to use parts of its land this year.

“We are also very grateful to Powys County Council, Builth Wells Town Council, Dyfed-Powys Police, Motorsport UK and an awful lot of other people in fact. It’s been an incredible effort by Neil Cross and the team at Quinton Motor Club to ensure that this event can take place, and now we must ensure that it runs safely and smoothly.

“The message is very clear – no spectators. I know it’s disappointing, but it’s only for one year.

“If fans ignore this plea and are seen on the stages, the rally will be stopped and it could affect the future of motorsport on the Epynt range.

“I certainly won’t be spectating. I don’t want to be the person that’s responsible for jeopardising the future use of this magnificent motorsport venue.

“I’ll be watching the rally on the internet at home instead.”

The Nicky Grist Stages contains eight stages, totalling 44 stage miles. A loop of four stages through Llyn Login, Monument, Halfway and Crychan will run in the morning, before midday service at the Royal Welsh Showground in Llanelwedd, followed by a repeat of the four stages in the afternoon.