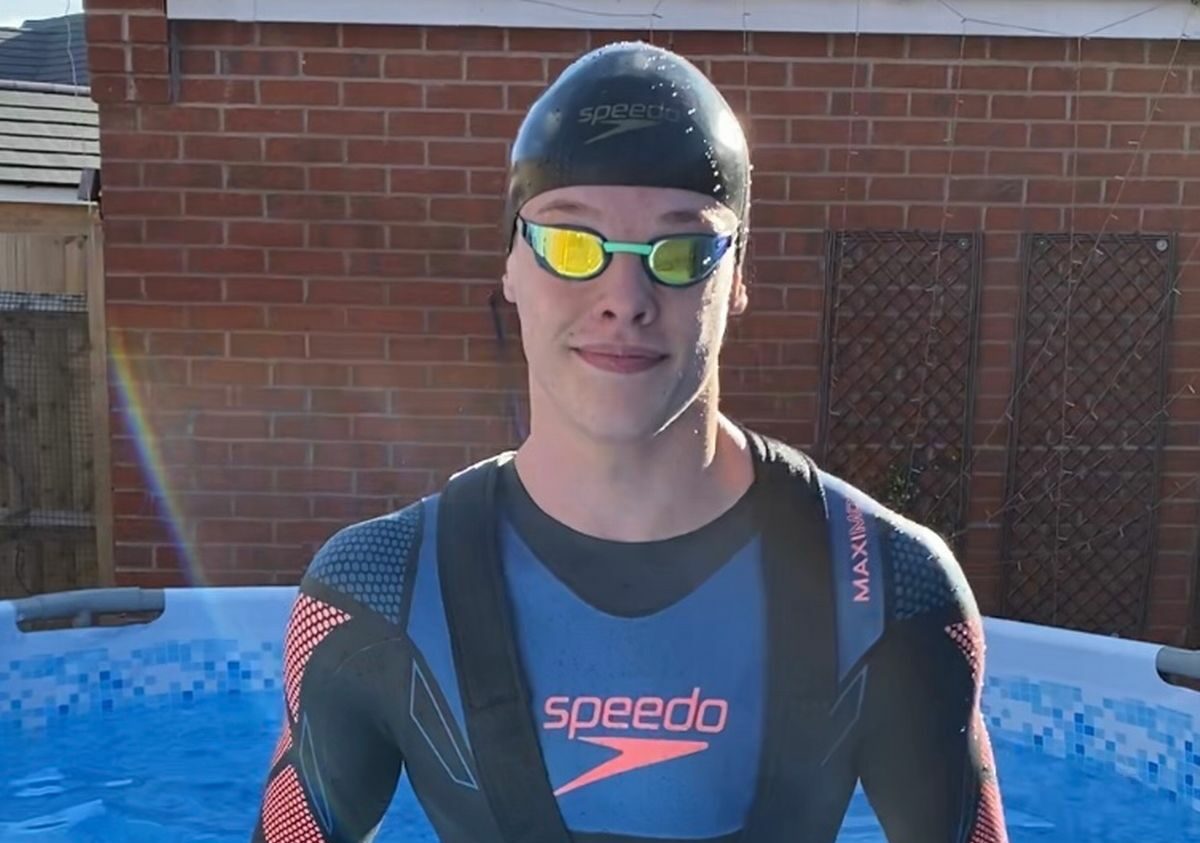 Matt Richards training in his garden during lockdown.

Without a doubt, he’ll be chatting about how proud he is of his #Tokyo2020 son, and the innovative swimming pool they created in the garden during lockdown ⬇️ pic.twitter.com/5lpfljs6mH

Matt Richards has already proven himself to be the fastest of the record ‘Super Six’ Welsh swimmers in Tokyo, but few knew that the speed he hopes will carry him onto the podium was honed in a paddling pool in his back garden last year.

When lockdown hit last year the rising star of the Swim Wales National Squad had to leave his training centre at Bath University and returned to the family home in the west Midlands.

A bit of Mum’s cooking would be very welcome, but the 18-year-old European Junior 100 freestyle champion was more concerned about being out of the water for 10 weeks.

Given his normal week contains up to 20 hours of swimming in the pool, along with a further five hours of gym work and other work-outs, it could have severely dented his Olympic dreams. It was time for drastic action.

With his Cardiff-born father, Simon, he scoured the internet to try to find a solution to his problem. The answer came in the shape of a 5 x 3 metre giant paddling pool that they erected in the back garden of the family home.

“When I heard I wasn’t going to be able to train in the water I thought I was going to go insane,” said Richards, who stripped another Tokyo Olympian Calum Jarvis of both his Welsh 100 and 200 freestyle records in this year’s British Trials.

“I went online and found myself what was essentially a massive paddling pool and put it up outside the garage in my back garden. I attached a bungee rope to the garage wall and tied it to a harness on the other end that I wore in the paddling pool.

“Then I spent hours every day just swimming stationary in the icy water. It was essentially a swimming treadmill, but that’s how I got through the first 10 weeks when we were out of the pool.

“I went from living in a world where everything revolved around swimming to one where I was told I couldn’t really do that anymore. If I hadn’t done what I did I think I would have struggled massively from a mental health point of view.”

Richards feared what might happen to him without his daily fix of swimming up and down the pool at Bath University.

Without the extra effort he put in with his family to stay in the water between March and May last year his chances of making Team GB would have been even harder.

“As soon as I saw the pool, I though I’ve got to order this. We filled it up with water from the hose in the garden, so you can imagine how long it took (it takes 15,000 litres) and how cold it was,” he added.

“The temperature was about 11 degrees. To put that into perspective, open water swims and triathlon swims get cancelled if the water temperature drops below 13 degrees.

“We bought a water heater and a solar blanket, which really helped, and Speedo, one of my sponsors, sent me an open water wet-suit to wear. That meant I could stay in for a couple of hours, rather than a few minutes.

“My Mum and Dad used to fill it up for me, but then had to go off to work and leave me to it. My Dad is a police officer and my Mum’s a head teacher. Luckily my Nan and Grampa live next door, so I’d get them to hold a stopwatch and shout at me to let me know how long I’d been at it.

“Looking back on it, it sounds pretty weird, but it was just the way of life at the time. It was freezing cold but it didn’t matter as it just kept me sane and still able to do the sport I love.”

By the time the British Olympic Trials came around in London last month, and with the pool sold to a lucky family in Swansea, he had got himself into optimum shape and chased British record holder Duncan Scott all the way to the wall in the 100 freestyle final to set a British best of 48.23 sec for an 18-year-old.

In the 200 metre event, Scott and Richards’ Bath team mate, Tom Dean, notched the fastest times in the world this year, with Richards setting another Welsh record in third in 1 min, 45.77 sec.

“I’m still very young, but I’ve got big plans and goals moving forward. Getting a foot in the door at the Olympics at 18 is really useful and I’m very excited.

“When I got the call saying I was on the team for Tokyo I started thinking about what I was going to do next after getting on the plane. Just going to wear the tracksuit goes against my psychology – I’m going with a plan, an aim and a hope to come away with a heavier suitcase than I left with.

“The 100 free in Rio was won by an 18-year-old, Kyle Chalmers, so stranger things have happened. The 100 free is often referred to as one of the ‘Blue Ribbon’ events at the Olympics, so to be a part of that will be great.

“Kyle Chalmers described it as an alpha male event in a recent interview. It involves a lot of big guys, usually bigger than me, and there is always a lot of testosterone and prancing around in the call room.

“It’s a very pumped up event, which is cool. I love it and it’s got my name written all over it.”

Having two of his Bath training partners, ‘Captain Jarv’ and Kieran Bird, with him in the British team in Tokyo will help him in the first of what he hopes will be a number of Olympic experiences.

The Welsh trio are also hoping to use their trip to Japan as a warm-up for next year’s Commonwealth Games in Brimingham.

Jarvis has already been part of two Welsh teams and picked up medals at the Commonwealth Games. Richards is hoping he can hang on for a third next year to give Wales a shot at further glory.

“Calum Jarvis has been a real inspiration for all of us. There is a lot to learn from him and the experiences he has had,” said Richards.

“We call him ‘Captain Jarv’ because he is the captain of our team. I’ve been nagging him to stay on for longer so we can all go to Birmingham together next year with Team Wales.”

Jarvis saw Richards take both his Welsh sprint titles at the British Trials last month, yet still went fast enough himself to make the cut for Team GB to finally reach his goal of swimming at the Olympics.

As far as Richards was concerned, writing out of the Welsh record books such an iconic figure as Jarvis merely made the achievement all the greater.

“The first thing I did was get straight to my phone and Facetime my Mum and Dad. They were in the living room watching with my grandparents, who live next door. They were watching the racing and they were all in tears,” he added.

“Normally you would hate to make your family cry, but this was one of those situations when their tears made me feel even more proud. It was amazing and great to know I had hit that time.

“Continual progression and always wanting to take the next step is what is uppermost in my mind. Every time I’ve had a major achievement in swimming it has always been a case of celebrating that then, but looking for the next challenge soon afterwards.

“At the British championships it was the 100 freestyle one day and then the 200 a couple of days later, which was really exciting. I couldn’t allow myself to get too high on the emotion of the 100 because I had another one.

“When I got the call saying I was on the team for Tokyo I started thinking about what I was going to do next after getting on the plane. It’s always hard to predict what times it is going to take to get into a final or onto the podium.

“Our trials were in April, but the Aussies and Yanks didn’t finish theirs until June. They are in a different place to us and it is difficult to say how it is all going to look when we get to race each other.

“I’d like to think a 47. Something would be good enough to get you into the final and then a low 47 to get onto the podium. We’ll have to see what we can do. I’ll have a plan and I’ll just try to execute it as best as possible. With a bit of luck and a following wind we’ll come home with a great result.

“I was surprised at the amount of depth the Americans had in their trails, which means they will have a strong relay team. They had 13 guys go under 49 seconds for 10 free, which is an incredible number of people to be going that fast.

“They are all looking in good shape, as are the Aussies in the 4 x 200 free. But so are we! It’s going to be a great dust up and scrap when we get out there.”

Richards could have swum for the nation of his birth, England, but has always considered himself Welsh because of the passion displayed by the father’s side of his family.

Having made his senior British debut at the European Championships earlier this year, and now getting set for his first Olympic experience, he can wait to swim for Wales as a senior next year.

“From a very young age I’ve grown up with a very big Welsh family on my Dad’s side. For as long as I can remember my family have told me I’m Welsh, even though I was born and brought up in England,” he said.

“Whenever the Six Nations or Rugby World Cup is on I’ve always supported Wales. That’s the way it has always been for me.

“I was 11 or 12 when I first found out I could sign up as a Welsh swimmer and that’s what I did straight away. A few years later I competed for the first time for a Welsh team in Edinburgh.

“Ever since then I’ve always been unbelievable proud to swim with a Welsh dragon on my cap. It still fills me with a huge sense of pride that I am representing my family and my heritage. The thought of competing at the Commonwealth Games in Birmingham is a huge goal for me.”