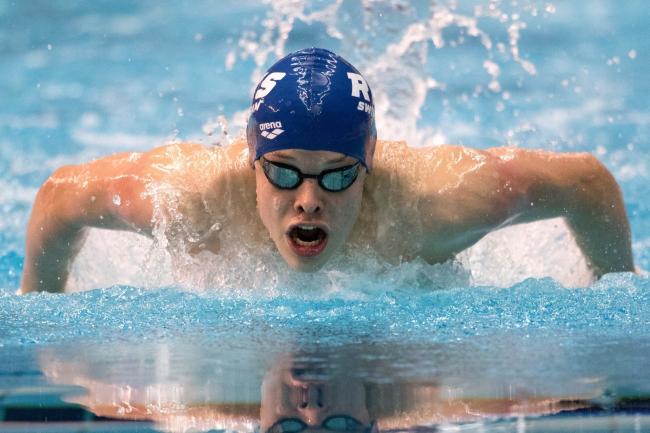 Matt Richards has set his sights on Japan and the Tokyo Olympics.

He may still be only 16, but Welsh swimming sensation Matt Richards already has his eyes set on next year’s Olympic Games in Tokyo. Those same eyes are on Japan for the next few weeks, too, as the young Welsh rugby fan tells Liz Byrnes.

Matt Richards gave his parents a hint of what was to come when he was only a five-year-old on a family holiday in Tenerife.

Disgruntled by having to wear armbands in the pool while other, older children didn’t, he marched up to his mother and father, told them he’d had enough and threw the armbands on the chair.

Whereupon he turned round and ran and threw himself into the deep end to the terror of parents Simon and Amanda.

He explains: “My parents both had a heart attack, my dad ran in and jumped in after me but I was fine and I loved it and that was where I found I had a real love for the water.”

Fast forward 11 years and that little boy has become one of Wales’ most promising swimmers for years – a European junior 100m freestyle champion in Kazan, Russia, with his time of 48.88secs elevating him to eighth in the British all-time rankings.

It was also one of three British age group records – along with the 200m freestyle and 50m butterfly – the 16-year-old set in July.

Describing the moment he looked at the scoreboard as “brilliant”, he still had much of his racing to come which brought silver in the 200m freestyle and bronze in the 4x100m freestyle.

He says: “I had to park all the feelings and the emotions at the time and just put them to one side until I had finished everything and then that was the point where I could look back and go, wow! I did that!”

His success has also led Richards to re-set his goals for the Olympics in Tokyo next summer where he intends to be competitive.

With the confidence of youth, he adds : “The goal is still to go to the Olympics, but it’s not just to go for the experience anymore.

“It’s now a matter of trying to make sure I go and I am good enough to go and compete against the top guys and be in there in the finals and just see what I can do.

“Obviously, that is not an easy task but with a good plan in place and sticking to it religiously I think anything’s possible.”

Born in England, but with strong roots in Wales, Richards has enjoyed a few weeks off this summer but will soon be returning to hard training in September.

His wider family support may originate from Wales, but for the moment the dedication and hours spent in the pool are undertaken over the border.

Matt Richards is breaking records and making a big impact on the swimming world. Here’s how he’s making waves in the sport.
🏊‍♂️

Richards has trained under coaches Marc Spackman and Tom Elgar at the Royal School, Wolverhampton since moving from his local club in Droitwich when he was 13.

It is, it seems, a perfect fit for Richards who won a total of 12 golds at the national age groups championships in the two seasons subsequent to arriving at Wolverhampton before his European junior success.

He is quick to acknowledge how much the coaching pair have done for him, saying: “Oh, everything. I categorically wouldn’t be where I am today if it wasn’t for them.

“The real difference and the key thing they changed for me is my mindset and how I looked at swimming.

“They changed it from a performance-based mindset and always wanting to make sure I was going quick times, to looking at how I get those quick times and then a generally more positive mindset and looking on the bright side of things.

“I just can’t thank them enough.”

Away from the pool, Richards is a “massive” rugby fan.

“I love watching it,” he says. “All my family are (rugby fans). So the World Cup, I’ll be watching that.

“It’s tough to call. I want to say Wales will win but it’s hard to look past the All Blacks.”

His father hails from Cardiff and Richards has spent a lot of time there with family. For him there was never any doubt where his heart is.

He says: “I’ve grown up with all my family telling me I’m Welsh and now I’m older, absolutely I’m Welsh.

“I see myself as Welsh aside from sport. In general, I am absolutely a proud Welshman regardless of the fact I was born in England.”