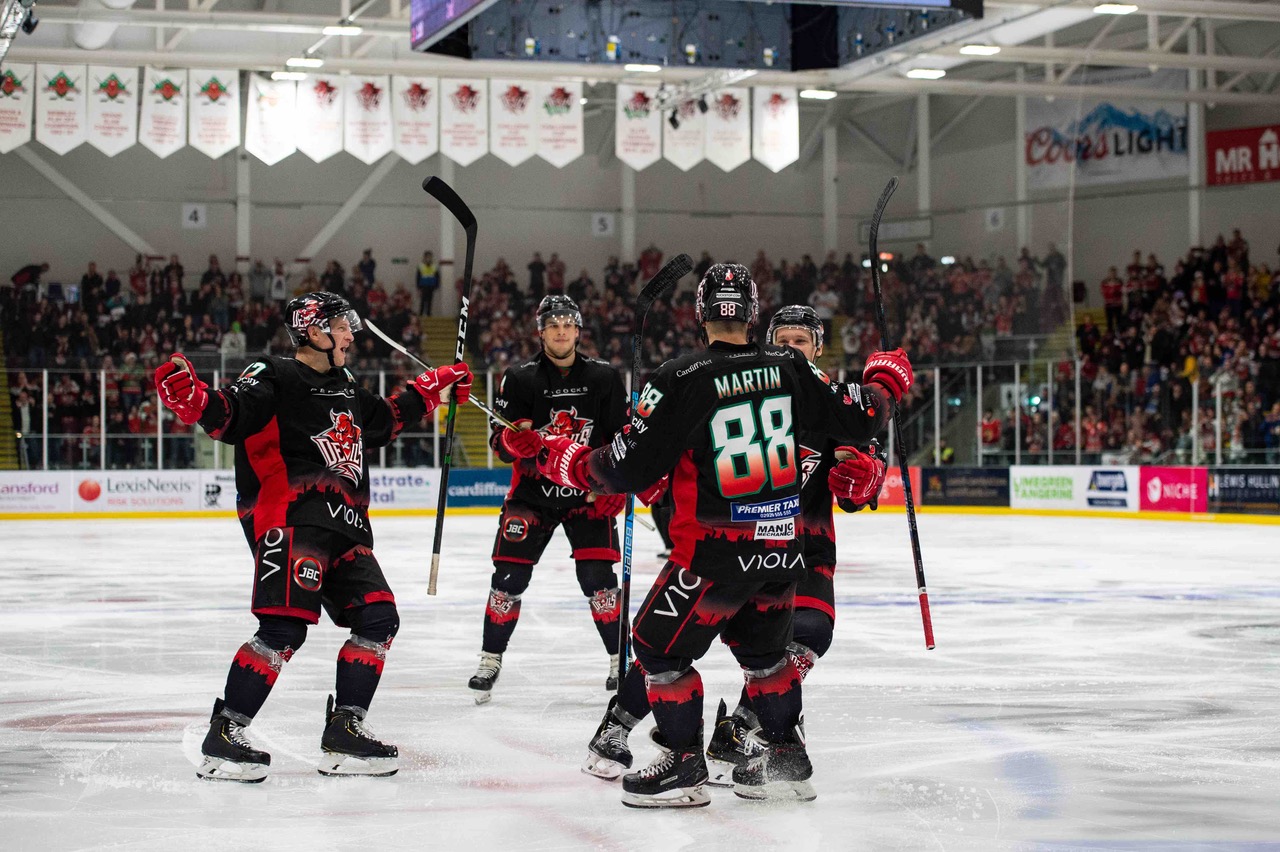 Cardiff Devils ripped the Challenge Cup from Belfast Giants grasp in ruthless fashion at the Viola Arena in Cardiff Bay.

Holders Giants failed to score in either leg of their quarter-final with Devils winning 1-0 in Northern Ireland an d powering to a four-goal win at home.

Devils have lifted this trophy twice and finished runners-up twice over the last five seasons and they will host this season’s final at the Viola on March 8.

The second semi-final will feature Sheffield Steelers and Glasgow Clan.

Sheffield and Nottingham have the option of home advantage in the second leg due to higher ranking from the group stage.

“It was man against boys,” admitted Giants coach Adam Keefe. “It’s a real low for us, really disappointing to completely lay an egg in a game as big as this one.

“Cardiff scored a powerplay goal and didn’t look back. We lacked passion, character and intensity.

“Now we have to put it behind us and put it right on sat against the same opposition.”

Devils fly to Ireland on Saturday when they play Belfast in an Elite League match at the SSE Arena before entertaining Manchester Storm in Cardiff Bay on Sunday.

“It was a good team performance, we were at the races from the get go,” said Cardiff coach Andrew Lord. “5v5 we were really good. Solid, really solid.

“Our special teams were effective and the whole game was a lot of fun.

“The second period was right up there with our best 20 minutes of the season. We played well during the Champions League, but form-wise it was a little rocky until four weeks ago.

“We’ve been honest with ourselves and getting better each day. It all came through in this match.”

Giants were shutout for the third match in five fixtures – two of those against Devils – and home goaltender Ben Bowns saved 20 shots.

Cardiff were rampant and Belfast had no answer to the sheer ferocity of Devils’ performance.

The score could have been far more damaging but for the agile, athletic work of outstanding net minder Shane Owen, who made 37 saves.

Devils play Panthers in their Challenge Cup home leg on January 22 with the return in Nottingham a week later.

Dixon put Devils ahead on a powerplay after eight minutes 47 seconds when he redirected Sean Bentivoglio’s pass before Duggan made it 2-0 at 14-37.

That followed fierce puck pursuit by Batch which ended with him lasering a perfect pass onto the stick of Duggan for a one-timer past Shane Owen.

Even on their own powerplay, Giants were unable resist relentless Cardiff and Martin made it 3-0 shorthanded on 21-49.

Frustrations boiled over when Giants captain Matt Pellech and Devils defenceman Mark Louis dropped the gloves for the second match in a row. Pellech took Devils kept pressing and added their fourth goal of the game when Batch tipped Sean McMonagle’s point shot into the net (36-12).

What’s better than a Christmas lunch and a Challenge Cup double shutout win by the @cardiffdevils ? Absolutely nothing. pic.twitter.com/9f6MOLUImH