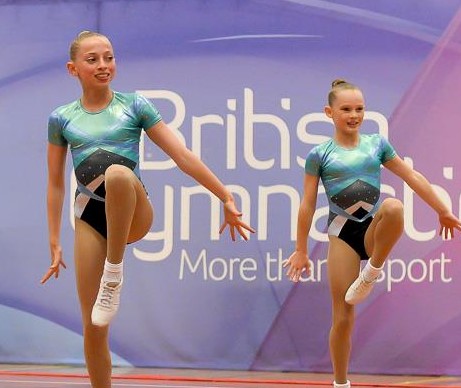 Mia Bernardo and Emily James have graduated to senior ranks and looking to gain selection for Europeans. Pic: Welsh Gymnastics

Two talented aerobic gymnasts from Aberdare will be flying for flag for Wales this weekend as they begin their quest to earn selection for this year’s European Championships.

Mia Bernardo, 18, and Emily James, 17, both head down the M4 to Reading to compete as part of a quintet in the first of two trials for Great Britain selection for this year’s Aerobic Europeans – being staged in Pesaro, Italy, in September.

It will also be the first taste of competition as senior aerobic gymnasts for both having now graduated from the junior ranks.

James, who trains between Bulmershe Gymnastics Club in Reading and Phoenix Dance & Gymnastics in Aberdare where she is also a sports leader, enjoyed a glittering junior career having burst on to the scene from a young age.

In 2018, aged 14, she was part of a British 15-17yrs group who qualified for the final at the World Age Group Championships in Portugal.

Bernardo, who is attached to Phoenix DGC, competed at numerous Welsh and British Championships as a junior having started competing at the age of eight.

In 2018, following a two-year break from the sport, she won Welsh Championship bronze at National Aerobic Code (NAC) level before moving up to FIG level a year later in order to compete internationally.

“I am a nervous about the trials and finding out if we get selected as I haven’t competed since before Covid,” said James.

“But I am happy and excited to have the opportunity. This is a big year for me as it’s my first year as a senior and there is a lot riding on us as a group getting selected.”

Bernardo said: “I’m very excited to be involved in the group for these European trials; I am nervous but it’s such a big opportunity which I know I’ve worked hard for.

“It would mean the world to me make the senior GB team for the Europeans, but it would also mean everything to my Phoenix club and coaches Laura [James] and Emma [Pritchard].

“The atmosphere and support within competitions from your club and other clubs is so motivational and helps me to do my best. I’m looking forward to competing again and striving to become better.”

Both will be part of a five-strong senior group trialling in Reading this weekend, alongside double senior British individual champion Niamh Keane (Bulmershe) and Basingstoke Gymnastics Club duo Keleigh-Anne Blakey and Elizabeth Marais.

It is the first of two trials for this year’s Europeans. It will be a virtual trial being held remotely at The Abbey School in Reading. The second trial is then scheduled to take place at Weston GC in Weston-super-Mare over the third weekend in June.

For both James and Bernardo, it also marks a return to competition for the first time since early 2020 and following 14 months of zoom sessions and training at home.

Meanwhile Laura James, Head Coach/Club Manager at Phoenix Dance & Gymnastics said: “The whole of Phoenix would like to wish Mia and Emily all the best in their European Championship trial this weekend.

“We are immensely proud of you both and that all of your hard work and dedication is paying off.”