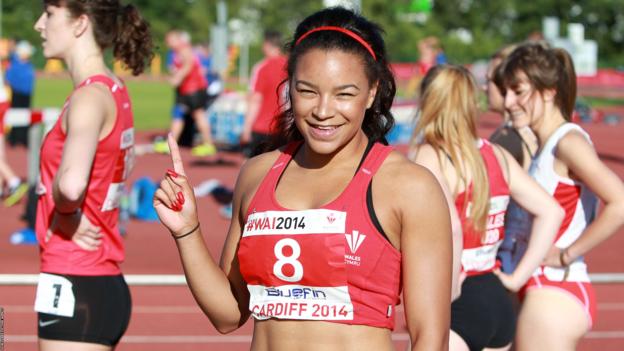 Mica Moore will be part of Welsh sprint squad

Welsh Winter Olympic bobsleigh star Mica Moore will be amongst a strong contingent of Welsh athletics talent competing at the 60th Loughborough International this Sunday.

Moore, who finished eighth in Pyeongchang with Great Britain team-mate Mica McNeill just three months ago, will run in the 100m and 4x 100m relay as part of a Welsh team which will take on England, Scotland, Great Britain Under-20s and British Universities.

As well as the official Wales squad competing in the prestigious annual event at the Paula Ratcliffe Stadium, there will also be six hugely promising Welsh athletes in the Great Britain Under-20 team.

The Wales squad is a mixture of youth and experience.

As well as Newport sprinter Moore, there is also a  return to international track action for Olympian and World Championship medallist Seren Bundy Davies, of Trafford AC, who is included in the women’s 4x400m squad after also missing the Gold Coast games.

Two of those who did represent Wales in Australia – long jumper Rebecca Chapman and hammer thrower Osian Jones – are also in the team, along with World and Olympic discus thrower Brett Morse.

Among the less experienced members of the Wales squad are Kiara Frizell (3000m), Bethany Moule (javelin), Laura Turley (4x400m), Alicia Samuel (4x100m) and Matt Harding (800m), who will all be pulling on the Welsh senior vest for the first time.

Welsh Athletics head of performance Scott Simpson said: “The event will be a great opportunity for individual athletes to gain more high level experience as they build towards another busy summer season of competition.”

Commenting on the Welsh contingent in the Great Britain squad, Simpson added: “I’m really excited about our under 20s right now, we’ve got a really promising cohort coming through, and to have five athletes in the GB junior team is excellent.

“This is a great opportunity for them and another step towards potential World Junior selection.”
The Welsh team for the Loughborough International is:

More information about Sunday’s event can be found at the Loughborough Sport website.