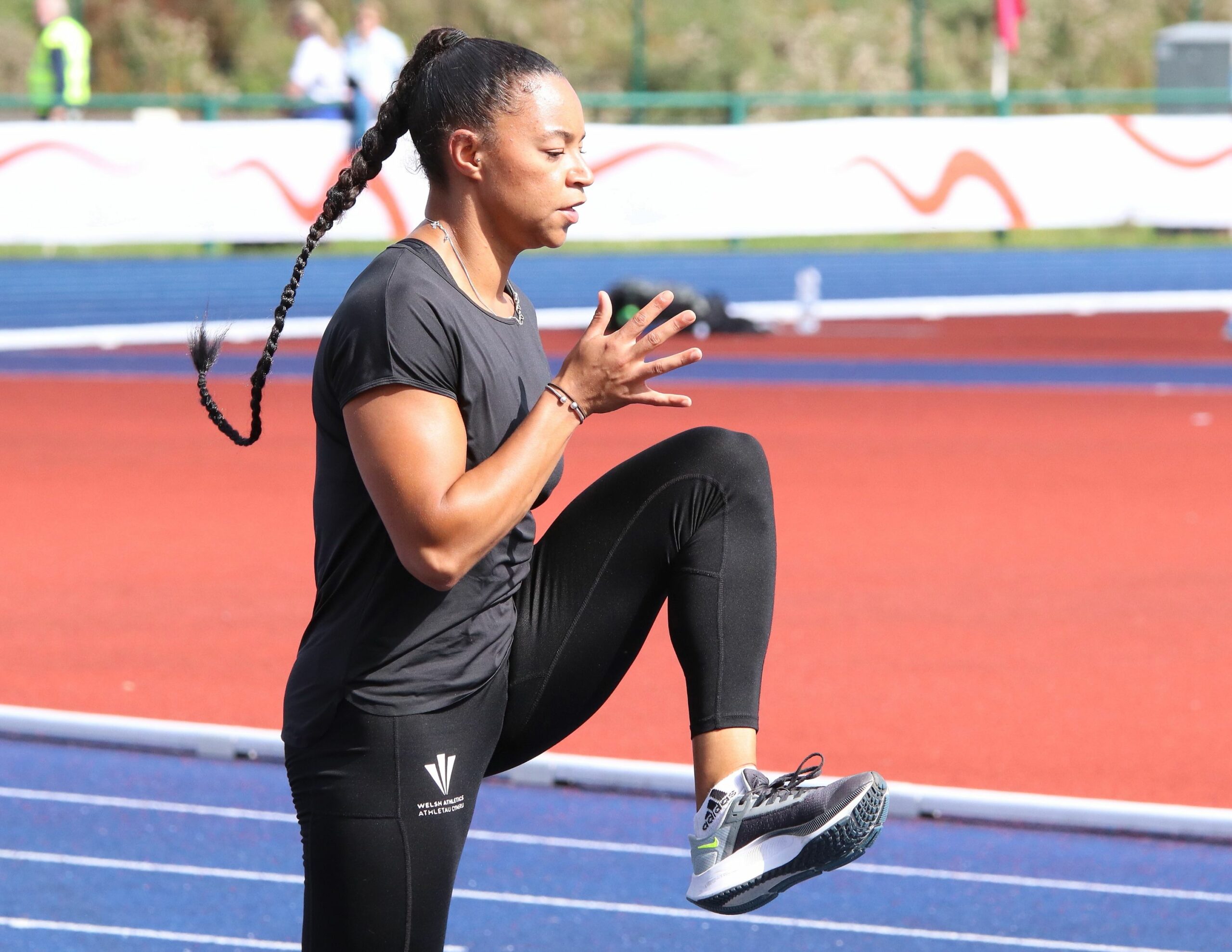 Mica Moore has sprinted at the Commonwealth Games, bobsleighed at the Winter Olympics and stepped into the boxing ring for a charity bout.

The multi-talented sportswoman even tackled an obstacle course in Argentina to win the BBC’s Winter Wipeout TV show as a teenager.

But despite her varied sporting exploits, the 29-year-old is genuinely excited about her latest challenge as part of the Welsh team taking part in next month’s innovative new indoor athletics international in Glasgow.

The Dynamic New Athletics (DNA) event – a six-sided international involving Wales, England, Scotland, Ireland, Spain and Turkey – follows on from the success of the inaugural competition at the 2019 European Games.

The event features mixed gender teams and a thrilling finale called “the hunt” where relay athletes run a variety of distances from 200m to 800m.

Moore says of the event, “They’re injecting some fun into athletics, making it a quick, sharp event. It’s brilliant to be a part of that. I’m super excited.”

The short, sharp format aims to attract new fans to the sport in the same way as T20 and The Hundred have done for cricket. Organisers are hoping for a bumper crowd at the Emirates Arena on February 5.

Moore is a fan of introducing new ways of attracting fans to the sport.

“Definitely, why not try it?” she says.

“When there’s a crowd, it makes it so much better. And that’s what we want. We want people to be able to come and enjoy our sport and cheer us on.

“My dad (Lawrence Moore, who is also her coach) is a big fan of cricket. He’s always going on about the T20 competition and how that really injects fun into the sport.

“For me, I’m an athletics fan, I love athletics. But for someone who might not watch it all the time, an event like this, where it’s quick-fire and you’ve got different events as well, is ideal.

“The medley relays, they’re going to be really fun. I’m excited to watch, but I wouldn’t want to take part in them!

“It’s way too far for me. I think my lungs would give out on me right now. I think 60 metres is just about far enough!”

Moore, who competed in the 4x100m relay for Wales at the 2014 Commonwealth Games, is also delighted the event offers another opportunity for athletes to pull on the Welsh vest – especially the nation’s emerging talent.

“It’s really nice to see these up-and-coming athletes having these fun competitions to go to.

“It’s another stage to represent Wales as well. It’s not often we get to put on the Welsh vest. So, any opportunity to do so is really, really cool.

“All the Home Nations are there, along with Turkey and Spain. So it’s an opportunity to race against the best. And that’s how you get better.

“In Wales, we’ve got some great athletes, anyway. But you need to be put against the best to become better. Any opportunity to do that is really great.”

The event is an opportunity to shine for Welsh athletes who are either chasing qualifying standards for this year’s Commonwealth Games or have already gained the mark for the event in Birmingham.

Moore herself is in the form of her life having clocked a 60m personal best of 7.48 after a last minute call up to compete at last weekend’s World Athletics Tour Indoor event in Manchester.

The Birchfield Harrier is one of those Welsh athletes who are currently chasing the tough nomination standards set for Commonwealths.

While a number of athletes, including Azu, have secured individual qualifying times, Wales’s sprint relay teams are still striving to achieve the standards.

Moore, who away from sport is building an impressive reputation as a talented broadcaster, says: “We’ve got some really exciting opportunities with training camps for Wales looking forward to Commonwealths.

“It’s going to be really tight either way. But I suppose that’s what makes it fun. It’s a challenge. I like to challenge myself. I’m just training well, training hard and seeing where that gets me.

“Last time, I went with the relay. And that was an incredible experience. And I think we’ve got real strength and depth across the board in the male and the female teams in Wales at the moment.

“Both teams are training hard to try and get that qualifying spot. All the girls in the team, they’re all running well, whether that’s over two or 100 metres.”

On a personal note, Moore is delighted to be back concentrating on athletics, having recently withdrawn from the race to qualify for a second Winter Olympic bobsleigh campaign, which saw fellow Welsh athlete Adele Nicoll selected as a reserve brake woman in the two-woman bob.

Moore, who finished eighth along with pilot Mica McNeill at the 2018 Winter Games, explains: “It was a decision that I made to take myself away from the team. And it’s meant that I’m ultimately a lot happier now.

“I’m really proud of Adele. I think it’s a shame that she didn’t quite get that spot to slide at the Games, but she’s there as a reserve. And it’s going to be incredible for her.

“I’m doing what I love and that’s my athletics. I wouldn’t say it’s quite over for me in bob, there’s lots of other opportunities for me there.

“I’m excited, I’m just loving training. I’m almost 30, I don’t really know how much longer I’ll get to train, but everything I’m doing at the minute, I’m enjoying.

“And to me, that’s the most important thing, just enjoying it while I can, and seeing what comes out of it.”

The full Welsh team for the DNA event in Glasgow is:

More information regarding the schedule and tickets can be found on the event website.