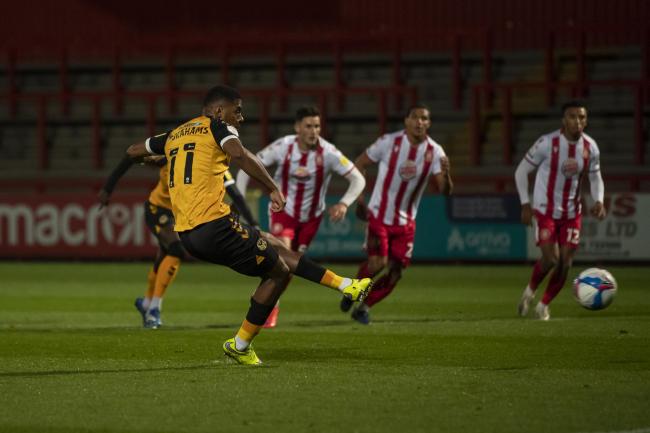 Tristan Abrahams saw his 'leveller' ruled out for a disputed foul in build-up.

Manager Michael Flynn is refusing to get carried away after seeing his  Newport County maintain their impressive start to the season.

The Exiles made it back to back wins since their only defeat against League Two leaders Cambridge thanks to Tristan Abrahams penalty in the 1-0 win at Stevenage.

Flynn hailed the display of Abrahams and strike partner Saikou Janneh as County remained in second spot only behind Cambridge on goal difference.

“That’s Tristan’s seventh goal of the season and him and Saikou were absolute pests,” said Flynn.

“They didn’t give their backline a minute’s break and they ran and ran and ran. They set the tone.

“I thought we were solid. We had some really good passing movements to get in the final third and we’ve just got to kill them off,” said Flynn.

“Them hitting the bar in the first few minutes woke us up, because after that we were brilliant.

“It’s pleasing we won, that’s the most important thing. We’ve won another away game.

“There’s only seven games gone, I’m not getting carried away. We’ve had a very good start and a great cup run, it’s been good so far – that’s it.”

Abrahams fired home after Liam Shephard was brought down in the area to give Flynn’s side their first-ever win at the Lamex Stadium.