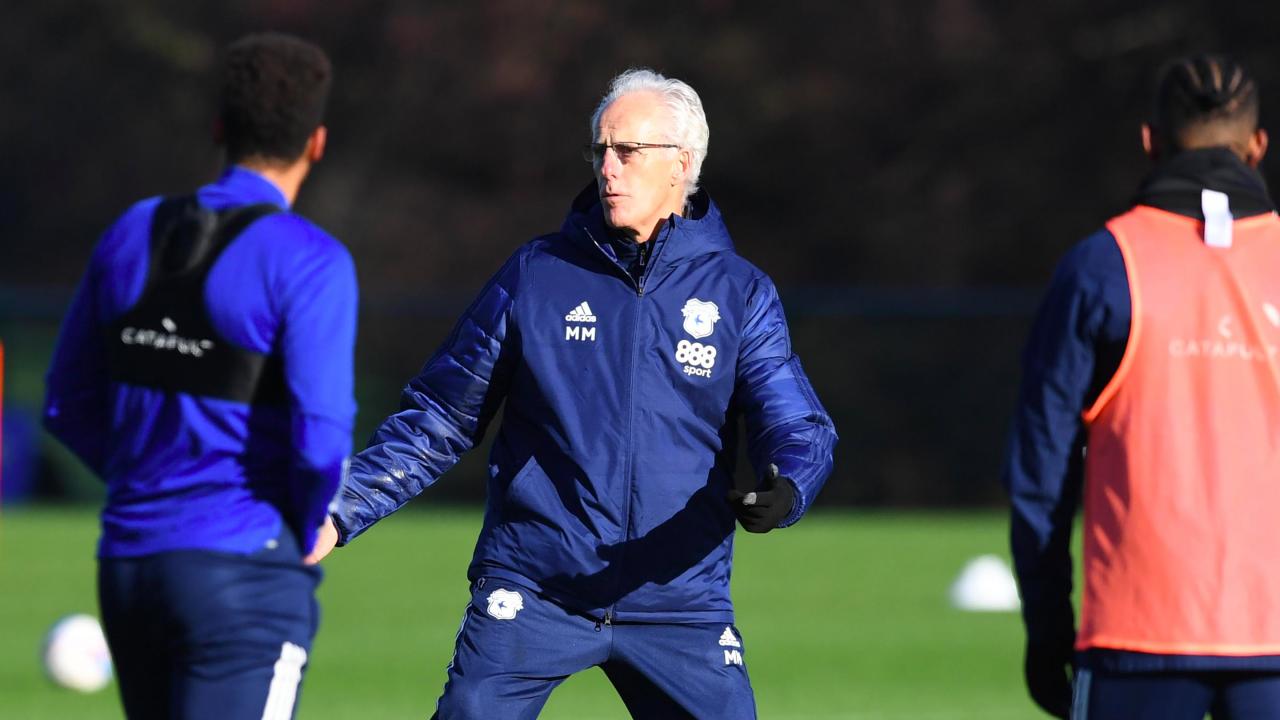 Mick McCarthy is relishing the prospect of taking charge of his first game as Cardiff City manager against his home town club Barnsley on Wednesday night.

But after being impressed with the response of his players since succeeding Neil Harris, McCarthy knows the tri to Oakwell represents the real thing.

“So far so good,” said the former Republic of Ireland manager whose City side are on a six game losing streak. “I’ll tell you a bit better when we’ve played some games.

“They’ve been great. They’ve trained well. I’ve been delighted with them on the training ground. Really pleased.

“From that point of view, and I’ve enjoyed, but as I said, we need games. That will determine how good the reaction has been.

“Training’s one thing. You see players that train well on a regular basis, but can’t get in the team, because when they play, they’re not as good.

McCarthy made over 250 appearances for Barnsley and knows they will be a tough est after their FA Cup victory over Championship pacesetters Norwich City last weekend.

“Barnsley will be a real test for us. I watched them beat Norwich on Saturday in the FA Cup,” he added.

“Real high-energy team. High press, and they get after the opposition. They’ll be up for it and we’ve got to respond to that. I’m hoping we’ll see that reaction.

“Got Millwall next and then Bristol City was where TC (assistant Terry Connor) was.

“You can’t get more affinity with any other clubs, but we’ll do our best. Barnsley’s my hometown and means a lot to me but I’m focused on winning this game.”

McCarthy knows a win – after a run of seven defeats in eight games which eventually cost Harris the job – would kick-start his reign.

“How do you get confidence back into them? A solid team performance and getting results. Nothing else gets it back,” added the 61-year-old who has agreed a deal until the end of the season.

“They might enjoy training, it might be a bit more fun. I’ve been there when you’re losing games. It’s hard to come in with smiles on your face.

“So, if the last two days have been a bit lighter and they enjoy it, it will only continue with a result against Barnsley. Then it’s Millwall. It all hinges on results, there’s no doubt about that.

He added, “I listened to Pep (Guardiola) talking about the sacking of Frank (Lampard), and he said it’s all about results. If you don’t get results, you’re in trouble.”

Cardiff will look to climb up the table as they currently sit in 15th place, 13 points off the playoffs. As host Barnsley sit in 12 place five points above Cardiff.

“We’ve got to stop getting beaten. That’s first and foremost, and you do that by having a solid shape. That’s no disrespect to anybody else. When you get beat, you start to get a bit fragmented on the pitch and they look around and start blaming each other.

“I saw a bit of that in the first training session. But it can’t be one man’s fault. You can’t just blame Neil Harris. If you’re in that state where you’ve lost seven games in a row, if you concede, you see players drop straight away.

“We’re going to have to organise against Barnsley and a real solid performance. Only on the back of those will we get confidence back.”

McCarthy is no stranger to the Championship as he has two promotions to his name with Wolves and Sunderland, but acknowledged there are no easy games in the Championship.

He added: “You look at the Championship. You never look at any game and think it’ll be easy. We’ll have to get through it with a real togetherness.

“I think I can get a reaction out of them. The reaction that matters is the one on the pitch on Wednesday.”

The transfer window is still open, and Mick McCarthy is yet to sign anyone for his team despite Cardiff already active in the window by signing Perry Ng and Max Watters.

McCarthy will assess the squad better after the upcoming game and admits there still could be more business done by the club, both in and out before the end of the window.

“I think we’ve got a good squad. Sometimes if you can bring in a couple of faces it livens the place up. But we’ve not had that conversation yet.

“The Barnsley game is going to be a real test for us and I’m going to know a lot more on Wednesday night/Thursday morning, but I think we’ve got a strong squad, to be honest.

“We’ve got 22 players, two players in every position. There might be some movement, but I want to get this game out of the way first. Let’s have a look and see what happens.

“There may be some who are playing, or some who are not playing that might feel like they want to move, but we need all the players that we’ve got and if anybody does move then I guess it’ll be with our permission or if we can do something else to replace them. We don’t want to be left with the bare bones either.”

On the injury front, City have been boosted by the returning left-back Greg Cunningham who could play a huge role for the remainder of the season.

Midfielder Marlon Pack will return to the squad after being out with a minor injury but could be without new signing Watters who picked up a slight injury in training.